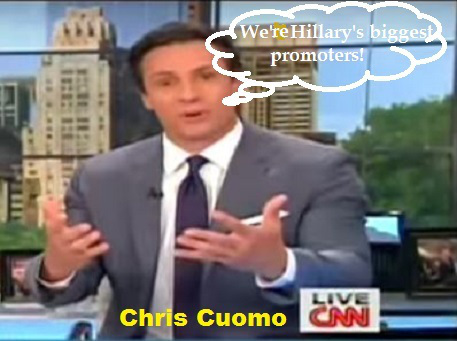 Journalists are supposed to report the news, objectively.

But many believe that the mainstream media, instead of being objective, are Democrat partisans and have an ideological Leftist agenda.

In June 2014, Cuomo openly admitted on camera that the media have abandoned all pretenses at journalistic objectivity, but instead give Hillary Clinton “a free ride” and are her “biggest” promoters. At the time, although Hillary had not yet declared she would run for the presidency, she was already getting donations for her then-nonexistent presidential campaign.

“It’s a problem because she’s [Hillary Clinton] doing what they call in politics ‘freezing pockets,’ because the donors are giving her money thinking she’s going to run, that means they’re not going to have available money for other candidates if she doesn’t. And I don’t think she’s going to give it to them. We [the media] couldn’t help her any more than we have, she’s got just a free ride so far from the media, we’re the biggest ones promoting her campaign, so it had better happen.“

No wonder this man at a Trump campaign rally Thursday in Kissimmee, Florida, gave the finger to CNN producer Noah Gray and other journalists, shouting, “Go home! You are traitors! I am an American patriot!”

So my question to those who consume only the MSM, especially this friend of mine who’s a supposedly smart lawyer:

How do you know they’re actually telling you the truth — about anything?