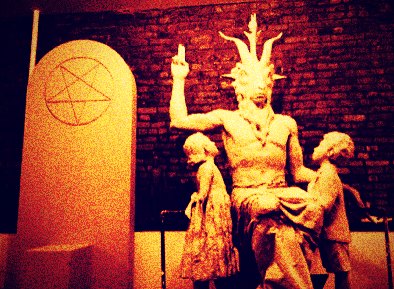 Here’s something you don’t see every day… or… ever.

A Satanic cult is set to hold a black mass publicly at the Civic Center Music Hall in Oklahoma City on Monday, August 15th.

Apparently after a sex offender invokes Satan, the group plans to desecrate a statue of the Virgin Mary because August 15th is celebrated as her Assumption into Heaven.

Satanist and registered sex offender Adam Daniels announced that he will invoke Satan through a blasphemous Black Mass followed by a bloody ritual called “The Consumption of Mary,” all performed on city property.

“Every American should oppose this hateful attack against God,” said TFP [Tradition Family Property] Student Action Director John Ritchie, who hopes to collect 200,000 petitions against the Black Mass by the end of the week…

TFP’s argument is that “Sacrilege is simply NOT free speech.”

Dakhma of Angra Mainyu, the group behind the black mass, claims this ritual will “educate the public on the practice of ahrimanism.”

Here’s an excerpt from the official press release on Yahoo!:

The Dakhma of Angra Mainyu is presenting an educational experience to the public. This will be a rare opportunity for the public to learn about the philosophy known as Satanism and learn the difference of religious Ahrimanism. Traditional Ahrimanism is a reconstruction of Zoroastrian Daeva worship found within Tantric Hinduism; which Zarathustra demonized the Agohri Shivite practices as part of creating the duality between cosmic order and chaos. The presentation will be split into 2 halves, which will include a religious ceremony and address the subject matter before each rite. The Black Mass, as written by Anton LaVey, will be the first “religious” ritual performed to show how the Satanic Philosophy is atheistic that falls in line with the Colonel ideals of Reason and Deism; combined with the religious mockery, blasphemy, and debauchery that made the Hellfire Clubs so infamous.

The second half of the event will give a detailed lesson on the religious significance of the Goddess Kali Maa. The main focus is on Kali Maa’s protective nature to defend the Devas (Gods) from the Asuras (Demons). The term Asura is the original religious term for angel. The religious ceremony will show direct worship of Kali Maa and allow for the display of Kali Maa to consume the Asura known as St Mary the Virgin. The rite is known as The Consumption of Mary, and will show many aspects of Tantric worship of Kali Maa and Kundalini practices. This ceremony will show spiritual religious actions versus mockery and blasphemy.

TFP’s online petition against the black mass has garnered nearly 148,000 signatures so far.