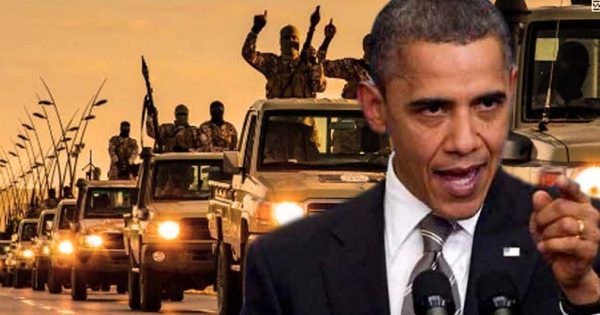 Well, this is not surprising in the least. A 2012 Pentagon declassified report demonstrates that the Obama administration was warned that its policies would lead to the creation of the Islamic State, but chose to ignore the warning.

The Defense Intelligence Agency report comes after GOP presidential candidate Donald Trump claimed that Barack Hussein Obama Soetoro Soebarkah and Hillary Clinton were the “founder” and “cofounder” of the Islamic State. Of course, the mainstream media lost their minds, but those of us in alternative media had already reported on this a long time ago. We also pointed out the members of the Republican Party were just as guilty of helping to create the Islamic State.

The DIA report said, in essence, that if we (the U.S. and our local cronies) keep aiding al-Qaeda, the Muslim Brotherhood, and other such sterling democrats, something really nasty would arise in eastern Syria. Several months later, it did, when ISIS declared itself a state straddling the Syria-Iraq border.

At some point, even a three-year-old picks up on the concept of causation. “Johnny, if you keep doing that, you’ll [break it, hurt yourself, whatever].” The MSM would have us think that Obama and Hillary are less intelligent than a three-year-old. By dumping funds and arms into the hands of terrorists—only the supposedly “moderate” head-choppers, of course—they had no idea, poor dears, what might happen.

Except they did. Aside from the cautionary example of the chaos Libya was thrown into by “regime change” in 2011, not to mention the appearance of al-Qaeda in the first place as a precipitate from the Afghan war against the Soviets, they had every reason to heed what amounted to a forewarning from DIA. Instead, they decided to press on, aware of the likely result. This was intended: ” . . . this is exactly what the supporting powers to the opposition want.”

Let’s put into broader context the Fourth Estate’s malfeasance in not connecting the 2012 DIA report to Trump’s accusation. In the last couple of weeks we’ve seen a steady parade of Republican poobahs and mandarins coming out against Trump (some overtly for Hillary though most pretending there’s some other alternative), plus a veritable Who’s Who of the Deep State responsible for every God-awful mess abroad, in both a GOP lineup and a bipartisan one. (If Trump does win, he’ll at least save time not having to draw up his own Enemies’ List.) And let’s not forget the former Acting CIA Director who’s calling for assassinations of Russian personnel (and Iranians) in Syria. Sure! It’s all in good fun! What could possibly go wrong?

The issue for the Obama administration is not one of ignorance, though. Many conservatives continue to believe the man is incompetent, but he’s not. He is a pawn for sure, but it is to assist the New World Order by advancing the Islamic State as a tool to implement global government.

In May 2015, Nafeez Ahmed, an investigative journalist and international security scholar, reported that the DIA document provided “no indication of any decision to reverse the policy of support to the Syrian rebels.”

“On the contrary, the emergence of an al-Qaeda affiliated ‘Salafist Principality’ as a result is described as a strategic opportunity to isolate Assad,” he wrote.

He added that the DIA document “confirms that the main component of the anti-Assad rebel forces by this time comprised Islamist insurgents affiliated to groups that would lead to the emergence of ISIS.”

“Despite this, these groups were to continue receiving support from Western militaries and their regional allies,” he concluded.

General Michael Flynn, who currently advises Donald Trump, took over as head of DIA a month before the report was released. However, he did confirm last year that the creation of the Islamic State was not the result of the Obama administration turning a “blind eye,” but rather was a “willful decision.”

Hasan: You are basically saying that even in government at the time you knew these groups were around, you saw this analysis, and you were arguing against it, but who wasn’t listening?

Flynn: I think the administration.

Hasan: So the administration turned a blind eye to your analysis?

Hasan: A willful decision to support an insurgency that had Salafists, Al Qaeda and the Muslim Brotherhood?

Flynn: It was a willful decision to do what they’re doing.

Just like Obama is guilty of treason in arming the Muslim Brotherhood, he is guilty of treason, along with many in Congress and many in the CIA and Defense Department in helping to establish the Islamic State. If you still think the man is incompetent, then you are part of the problem.