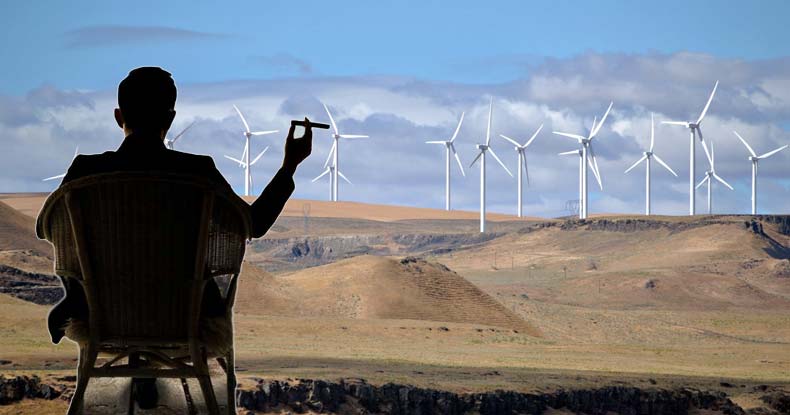 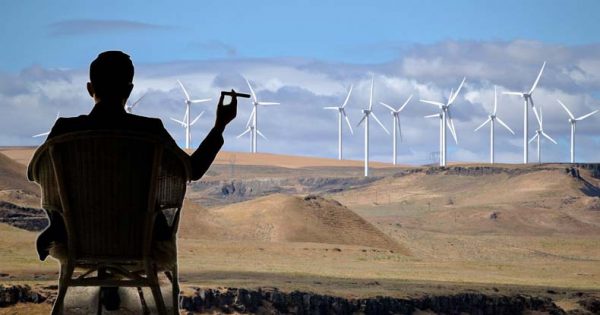 Wyoming — Shortly after they realized the potential for wind energy creation in Wyoming, renewable energy companies began constructing turbines on private property and then selling the clean power they generated to the residents. However, shortly after their ventures began, Wyoming government officials, acting on behalf of fossil fuel interests, moved in for the kill.

The state legislature asked the question, “Who owns the wind?”

Without much debate, the Wyoming legislature quickly determined that the state does.

Unlike any other resource derived from the use of private property, which the property owner maintains from surface ownership, the state of Wyoming claims wind is different.

So, lawmakers decided to tax it. For the last several years, Wyoming has been taxing the power generated by wind turbines at $1 per megawatt.

Do not mistake this tax as part of the regular taxes that already apply to businesses like income tax and employment taxes. No, this is an entirely new tax based solely on the assertion by Wyoming officials that they own the wind.

“Wind is different than anything else. It’s not like a mineral, which is something that sits there in the ground until you go after it,” says Bob Whitton, chairman of the Renewable Energy Association of Landowners (REAL). “It’s not like water that can be put in a lake or pond. The wind blows in and blows out and you can’t put it in a pond, pipeline, truck or train and send it somewhere.”

“The question is if wind rights should be severable from surface ownership,” says UW Law Professor Dennis Stickley, who has worked on the issue along with a group of graduate students that gave their findings at the recent Wind Energy Task Force meeting in Casper, as reported by WYLR.

“As a general principle, all rights in property are assignable and transferrable and alienable, and you can transfer title,” says Stickley. “Moreover, anecdotally there are situations already where landowners have severed wind rights.”

However, thanks to Wyoming officials, these rights no longer apply.

This move is purely retaliatory and meant to stifle new businesses who threaten the dinosaur coal and fossil fuel industry’s grip on energy production.

“Just about every legislator we’ve met with asks us, ‘You tell us how much we can tax you before we put you out of business,’” said Bill Miller, chief executive of the Power Co. of Wyoming, which is planning the wind farm. “I just shake my head and say, ‘Zero.’”

He said the state was at risk of “taxing this project out of existence.” And this is by design.

Of course, the wind industry isn’t completely innocent in this debacle either. For years, many of these companies have flourished thanks largely in part to federal and state subsidies. These subsidies created an artificial boom which sent not only wind technology prices through the roof but also solar. However, as we see now, as the government begins turning off the faucet of subsidies, prices go down.

One of the reasons Wyoming is levying this tax is because of these very subsidies. However, like Miller said earlier this year, if they wouldn’t be forced to pay higher taxes on the wind, they wouldn’t even need the federal money.

The cessation of the flow of federal money to startup companies isn’t stopping the big energy companies from using their influence over government to wage war on their renewable competition.

As the Free Thought Project reported earlier this year, while Nevadans were celebrating the holidays under solar-powered lights, the Nevada Public Utilities Commission (PUC) voted unanimously to increase a monthly fee on solar customers by 40% while reducing the amount they get paid for excess power sold to the grid. Adding insult to injury, they made the rate changes retroactive, sabotaging consumer investments in solar energy.

This single move by government regulators is effectively killing the solar industry in Nevada and has put an end to the surge of people seeking to detach from the grid by harnessing their own energy from the sun. Just as importantly, it serves to protect the profits of Nevada’s public utility company, NV Energy.

NV Energy—a regulated monopoly with an “authorized rate of return”—is unabashed in saying that the surge in renewable energy is cutting into their profits. Last year the company, owned by Warren Buffett’s Berkshire Hathaway, got Sen. Patricia Farley to draft the amendment that shifted the state’s net metering over to the PUC. In their view, solar customers “don’t pay their fair share to maintain the grid.”

As the energy monopolies of the 1900’s attempt to prop up their soon-to-be obsolete industry, the smart and ethical ones will figure out ways to adapt. However, as is the case the majority of the time, those with access to the state will prop themselves up the only way they know how — with government.

Thousands of High School Students Across the US Bow Their Heads to Pray in Unison
September 23rd, 2021 Flag And Cross