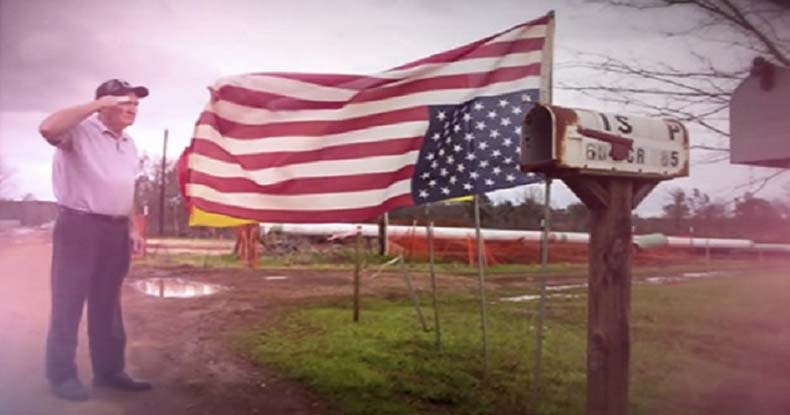 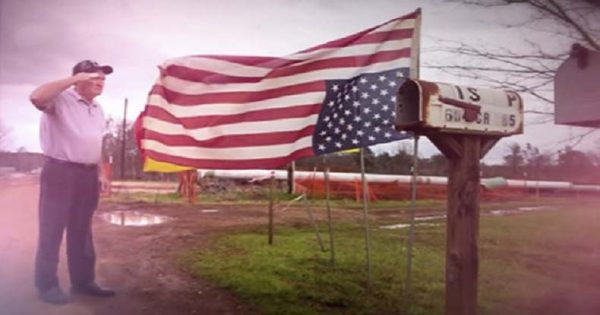 Somers, IA — Homer Martz is a 63-year-old Vietnam veteran who’s never committed a crime. He is so dedicated to protecting and practicing his rights that he stood up for the rights of people to protest the Vietnam war — even after they spat on him. So, when Homer Martz is arrested for doing nothing other than practicing the very rights he stands to protect, and the flag that ostensibly represents them — something has gone awry.

Last week Martz attempted to practice the very rights that the United States government claims its military protects, and for this, he was arrested.

For hanging a flag upside down on his own property, Homer Martz was kidnapped by state agents and charged with a crime.

Hanging the flag upside down is an international symbol of distress. Martz was voicing his distress after the government had violated his property rights at the behest of big oil. Without his consent, through the process of eminent domain, Martz was told that he’d have to accept a portion of a 1,134-mile oil pipeline built by Texas-based Dakota Access LLC. The line would go right through the middle of his property between his home and his water well.

All Martz asked was that the company move the pipeline 150 feet over to avoid the potential danger of interfering with his water supply. But he was denied.

Martz didn’t grab an AR-15 and go shoot up a crowd, he didn’t even make a sign and protest city hall. Instead, this innocent man chose to make a statement at his own house. Martz hung his American flag upside down under a Chinese flag and wrote the following statement on his flag pole:

“In China there is no freedom, no protesting, no due process. In Iowa? In America?”

One of the officers was carrying his two flags.

“They said, ‘You can’t do this. We have a statute.’ I said I’m sorry but you shouldn’t have took them down,” he said. “So I walked back out and put them back up, and they arrested me.”

These brave public servants knew they were doing wrong, but they don’t make the laws, they just enforce them.

Under an Iowa statute, desecration of the flag is a simple misdemeanor, said Calhoun County Attorney Tina Meth-Farrington after Martz’ arrest. If convicted, Martz could be fined and face up to 30 days in jail.

The good news is that these tyrants finally realized that they were breaking federal law by arresting Martz. In 2014, Iowa ruled the very law they used to arrest Martz unconstitutional. However, they never repealed it.

Meth-Farrington says sheriff’s deputies who charged Martz weren’t aware courts had struck down the law. She called on lawmakers to repeal it immediately “so that other citizens and law enforcement are not caught in this type of situation again.”

On Monday, all charges against Martz were dropped.

Land of the free?

Last month, we reported on a man from central Pennsylvania who was also kidnapped by police and deprived of his rights for doing nothing more than hanging an American flag upside down on his own property. Joshua Brubaker has since settled a civil rights lawsuit against the city for more than $55,000.

In the famous Supreme Court case of Texas v. Johnson in 1989, a five-justice majority ruled that desecrating the American flag was protected speech under the First Amendment to the US Constitution.

Despite this ruling, Americans from sea to shining sea continue to call for the arrest, or even death, of those who’d dare express their opinion through the use of the Old Glory.

The very essence of freedom is tolerating peaceful forms of expression, no matter how uncomfortable they make us feel. Sadly missing the point, however, are folks who fail to understand that burning or desecrating a flag without fear of punishment from one’s government, is what liberty is all about.

When a society becomes more concerned with a piece of cloth than the freedom it is meant to represent, it’s time to wake up.

As a former member of the USMC, I am unoffended when I see flag set ablaze or stepped on or upside down — because I see it as an act of expression by a group who feels oppressed.

Those who feel oppressed must never be silenced.

Throughout history, the ‘patriotic’ majority has been responsible for most of the atrocities committed against our fellow humans. Only because of a handful of irate freedom loving individuals, unafraid to challenge the status quo, do we have any semblance of liberty in America today.

A true patriot is never a member of the majority who calls for their opposition to be silenced with state force because their views are ‘offensive.’ No, a true patriot is the one who refuses to be intimidated in the face of this violently obstinate collective.