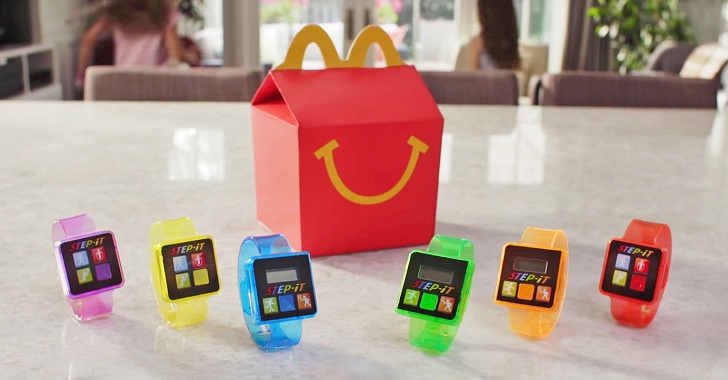 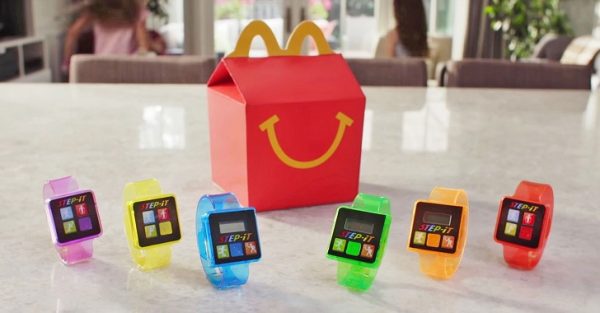 McDonald’s, a company reviled as of late for its use of unhealthy ingredients, has decided to change course. Kind of.

In its latest marketing ploy to prove it is more than a chemical mill masquerading as a restaurant, McDonald’s has launched a new Happy Meal toy: a pedometer.

The month-long “step-it” toy promotion is intended to encourage children to exercise. McDonald’s Canada Senior Marketing Manager, Michelle McIlmoyle, discussed the new temporary addition. “Physical activity is important to everyone of all ages. We very much support children’s well-being,” she said in a press release, as reported by Digital Trends.

“Step-it is in line with McDonald’s general philosophy for Happy Meal toys, which is to make toys that encourage either physical or imagination-based play,” she added.

The new wristband fitness tracker is the company’s latest effort to clean up its image.

“McDonald’s is a fast food brand and they’re sort of seen as the pinnacle of fast food, and because of that they’re really associated with unhealthy food,” Russ Martin, senior writer with Marketing Mag, told CityNews. “The company has been doing a lot to change that perception, it’s certainly an uphill battle.”

Attempts in recent years to improve the Happy Meal have included a reduction in the portion of fries and new options like fruit and nonfat chocolate milk. McDonald’s also vowed to stop marketing soda and promote healthier beverages, instead. Additionally, in 2014, the company added Gogurt, a high fructose corn syrup spin on yogurt produced by General Mills, as a ‘healthy’ option for kids.

But McDonald’s latest attempt to transform its image with the new pedometer falls short. Though they have attempted to clean up Chicken McNuggets, for example, by removing artificial preservatives and transitioning into only white meat, the chickens are still treated with antibiotics. McDonald’s recently announced it would no longer use human antibiotics in its livestock, but as food blog Eater pointed out, the fast-food giant conveniently ignored that it would continue to use other antibiotics specific to animals, which still pose health risks.

An undercover investigation last year by Mercy for Animals found that at a farm that contracts for Tyson Foods — which supplies chickens to McDonalds — “the birds were bred to grow so quickly that they became crippled by their own weight and often died from organ failure. The group also claims that the birds are crammed into sheds where they live in their own waste before being trucked on to the slaughterhouse,” USA Today reported. The investigation also exposed workers “standing on the birds’ heads and pulling their bodies to break their necks.”

Further, McDonald’s fries still contain 19 different ingredients and are fried in highly processed soybean oil, hydrogenated soybean oil, and canola oil. The “healthy” fruit options are not certified organic, meaning they are likely genetically modified and grown with pesticides. The beef used in hamburgers is still treated with a variety of hormones because the company’s pledge to cut down on antibiotic use only applied to chicken, Civil Eats has reported. In fact, a report released last year by various food and consumer advocacy groups gave McDonald’s a “C” for its antibiotic practices.

Further, while McDonald’s promotes the importance of exercise — which is undeniably vital for children — its new plastic toy does little to counteract the negative effects of the food that comes with it.

Research consistently finds that physical activity “may not be the key determinant of unhealthy weight gain in children,” as one 2011 academic study found. As the New York Times explained, while exercise offers many health benefits and can contribute to weight loss, diet is the most powerful factor in determining weight, both for children and adults. Fast food has been linked to weight gain and risk of obesity in children.

This reality negates the potential benefit of a plastic pedometer. Their changes represent a voluntary attempt to better satisfy their customers, but marketing food that is clearly still unhealthy as a smart option for kids is ultimately disingenuous. In another example, earlier this year, McDonald’s rolled out a “nutrient-rich” kale salad that contained more calories than a Big Mac.

The irony of McDonald’s attempting to align its image with health consciousness and safe options is best demonstrated by the pedometer itself. One mother recently warned about the toy in a Facebook post shared over 100,000 times:

Other mothers confirmed that their children, too, had been harmed by the toy, showing the latest marketing scheme is burning children in more ways than one.