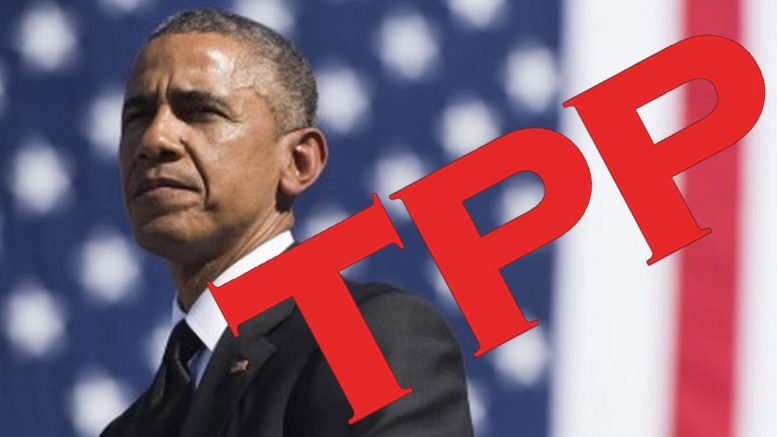 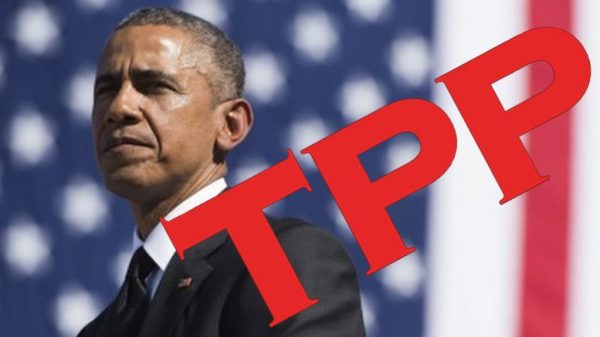 First: know that the TPP (Trans-Pacific Partnership) is a huge Globalist trade deal among 12 nations that would a) “phase out thousands of tariffs” (NY Times, 6/1/16) and b) set up corporate tribunals to punish nations that refuse to import goods (e.g., toxic pesticides, toxic medical drugs, GMOs).

In short, it’s a nightmare.

Wiping out tariffs is the cornerstone of the Globalist agenda. It allows companies in industrial countries to move their factories to Third World hell holes, pay slave wages, ignore environmental conditions, and then export their products back to the countries they abandoned—with no tariffs. No taxes. No penalties.

The absence of tariffs is the gift that keeps on giving. It’s the ONLY way these corporations can export products from their factories in the Third World and make a profit. It’s the un-level playing field. It creates a world run by and for mega-corporations.

Obama is the Rockefeller Globalists’ man in the White House. He’s tasked with pushing through Congressional ratification of the TPP, come hell or high water.

He sees hell on the horizon and the water is rising. If Trump wins, the TPP is likely toast. If Hillary wins, who knows what’ll happen? Her latest flip-flop was to come out against the TPP. That was her strategy as she tried to win over Bernie Sanders supporters. Sanders was virulently against the TPP treaty.

So…Obama is aiming to have Congress ratify the TPP during its lame-duck session, which takes place after the November election and before new winners assume office in January.

In other words, during the lame-duck session, all members of Congress who occupy office at this current moment will still be there, before the newly elected Congress (whoever they are) takes over.

Obama calculates his best chance of passing the TPP is with the present membership of Congress.

Twilight Zone? You bet. Here’s the picture: the election is over, the newly elected Congress is ready to take charge in January, but in November, with the old Congress still there (the lame ducks), Obama will make his last-ditch stand to leave the US and 11 other Pacific nations with one final exploding disaster, as he moves to a lavish home near one of his favorite golf courses.

As we speak, he’s on a nationwide tour, drumming up support among recalcitrant Congressional members and fence sitters, offering whatever he can to turn the tide in his favor.

Imagine this: you’re a member of Congress who’s just been voted out of office. You’re still there in November, though, one of the lame ducks sitting in chambers, sipping good scotch, watching Law&Order reruns, boxing up mementos, playing poker, running out the string on your expense account. One of Obama’s people drops by to convince you to vote for the TPP.

What can he offer you? You’re done in Congress.

So whatever the deal is, chances are it’s going to be sleazy. Maybe you’d like a cushy gig with a big pharmaceutical company. Maybe you’d like a seat on the board of a Wall St. firm. Maybe you can score a great price on a house in the Bahamas. Maybe your ne’er-do-well son can get into Harvard, once he’s out of drug rehab. Maybe the video of you and that three-thousand-dollar hooker in a DC hotel will vanish…

Because of these Globalist trade deals, good jobs in the US have been running away like marathon runners from the starting line. But who cares? The sinking US economy is “a fact of life.” You’re a lame duck. You need comfort and gifts in the next phase of your life. Inside the Beltway, it’s make-a-deal all the time. Nothing new.

You need to grab whatever is on the table before you go out the door.

By the process of Washington DC alchemy, lame ducks can become vultures and buzzards and even eagles.

Thank you, Mr. President. Your mission is nearly done. Thank you for this one final messianic miracle.

The American worker is in your debt. Literally.