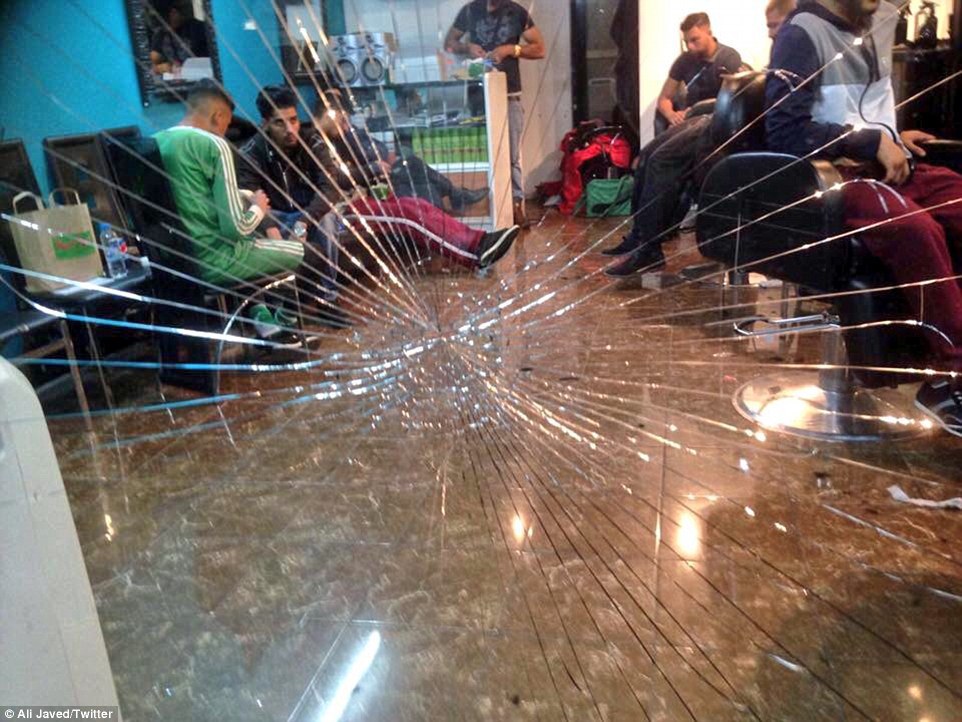 Europeans and Americans, take clear and detailed notes because this is how to deal with Islam in a way that is effective and the Muslims can understand:

A gang of Romanians stormed a barber shop with baseball bats and brutally attacked staff after the owner asked them to stop drinking outside following more than a year of disputes.

One man was taken to hospital with serious injuries and other suffered minor wounds after the group of up to fifteen people attacked Five Star Barbers in Luton, owner Mohammad Abbas-Khan said.

The 23-year-old hairdresser said that one man received a bad head injury while the owner of the shop next-door was repeatedly beaten on the back so badly that two days later, he is still unable to move his arm.

The men smashed the window of the shop, damaged one of the staff member’s cars and blood could be seen splattered on the floor tiles after the brutal attack.

Mr Abbas-Khan was in the shop with two other staff members at the time but he now fears that they will return and attack him when he is alone.

‘I have a very strong feeling they will come back. Sometimes I work until 10pm or 11pm and if I am all on my own, what could I do to protect myself,’ he said.

We have been saying for a very long time that the reason why the Muslims are doing what they are doing is not just because of Islam’s nature, but because they believe the West is weak. As we have said repeatedly, Islam is actually a weak, predatory religion that preys on the helpless. If it thinks you are helpless, it will attack you like a pack of hyenas. However, if you are strong, it may test you, but if you show force, it will leave you alone.

Islam only respects force because there is no love in this religion. To Islam, love is forced obedience through abuse. They mock true love because it is compassionate, kind, and respectful. That is why Islam hates Jesus so much: because they mock the mercy of God as weakness and, therefore, hate true love.

Yes, we must pray for the conversion of Muslims and hold a higher standard than they do for us because we are NOT them. This also means not tolerating their abusive behavior. If they want to try to enforce Shariah law on others, they need to feel an equal and more powerful force pushing back against them.

Terrorism in Islam is not an end unto itself, as we have been told, but it is a tactic to the greater end of making you scared into submission to Islam. It is an inevitable, inseparable part of Islamic theology. In any case, Islam will try to use fear to scare you into submission. This leaves you with two choices: you could submit to the fear and assent to the demands of Islam, or you could scare the Muslims back so they think twice before they try to push Islamic demands on you again.

Somebody is going to be scared into submission, and the choice is either you or them. Don’t let the Muslims do it to you.

This video shows Muslims attacking police in the UK. This is why the UK is being overrun: because the people are not standing up to the Muslims like these Romanians did. Only when the British treat the Muslims the same way these Muslims are treating the police here will the situation start to get under control in the UK. I emphasize: this is not abuse, but rather justice, for if the Muslims will not accept the mercy which Europe has granted them and continue to refuse to live in civil society, they must receive justice, as anything less would be license.