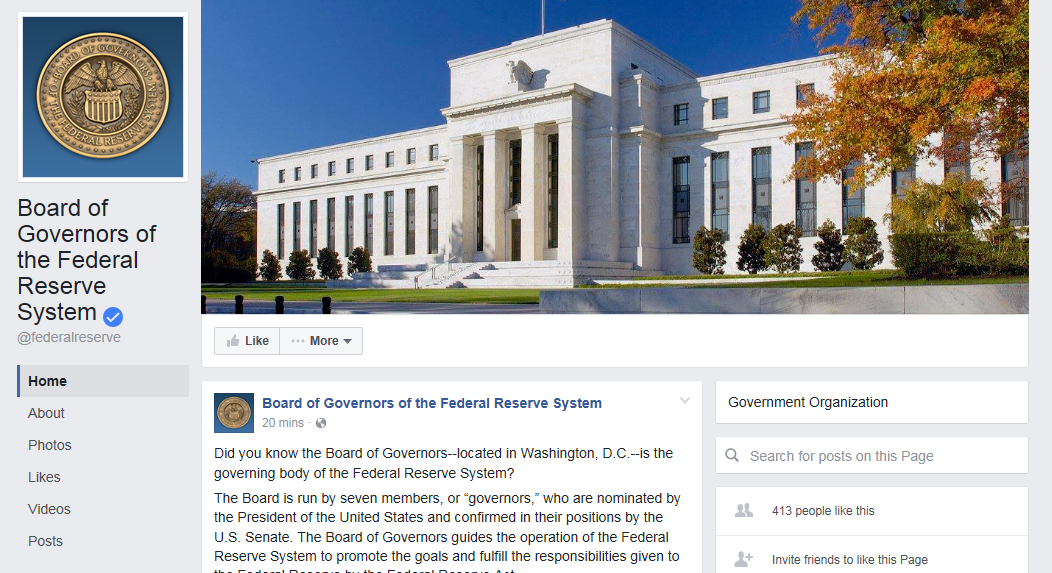 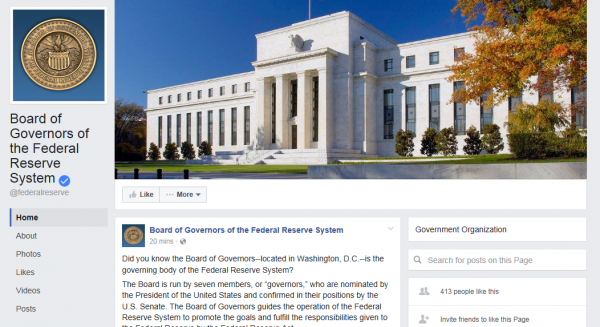 The Federal Reserve bank is well-known for its secrecy. But in an attempt to reach out to the people it claims to serve, the monolithic bank just created a Facebook page . . . and it’s probably really regretting that decision.

Unlike Twitter, where the Fed decides which comments to reply to — and therefore which show up publicly on its page — its public Facebook page, launched Thursday morning, is not as restrictive. In fact, the Board of Governors of the Federal Reserve System page has been relentlessly trolled since it went up.

The Federal Reserve bank was originally crafted largely by bankers, including JPMorgan Chase & Co. It has never been fully audited since the Federal Reserve Act was passed in 1913, yet it enjoys an omnipresent status in the United States. As the Fed’s Facebook page points out, “Over the years, its role in banking and the economy has expanded.”

People have protested the banking institution since it was created, but it remains one of the best-guarded, most opaque institutions in the country.

A congressionally mandated audit by the Government Accountability Office in 2011 found the Fed had loaned out $16 trillion dollars to big banks around the world. As noted by Senator Bernie Sanders at the time, “This is a clear case of socialism for the rich and rugged, you’re-on-your-own individualism for everyone else.”

“For example, the CEO of JPMorgan Chase served on the New York Fed’s board of directors at the same time that his bank received more than $390 billion in financial assistance from the Fed. Moreover, JPMorgan Chase served as one of the clearing banks for the Fed’s emergency lending programs.”

In 2012, the Federal Reserve earned $80 billion in profits. The gap between rich and poor in America had already grown substantially in the preceding years. At least one official from the St. Louis branch of the bank admitted the Fed’s signature policy of quantitative easing had failed to help the recovery.

Lawmakers like former congressman Ron Paul have long fought to make the Fed more transparent and to hold it accountable. Paul has always challenged its fundamental authority, taking the more extreme stance that rather than auditing the fed, we should end it. Others have stopped short of terminating the bank, but still advocate more openness and vigilance over the private institution.

If the comments on the Fed’s new Facebook page are any indicator, many people harbor similar sentiments.

In response to the Fed’s statement that it helps “make decisions that help promote the health of the U.S. economy and the stability of the U.S. financial system,” one commenter sarcastically asked:

Commenters on other posts hurled further critiques of the Fed. One challenged the popular notion that the bank is a branch of the government (it isn’t, though it was created and granted authority by government).

Other comments spoke to the Fed’s broader policies:

Many criticized Janet Yellen, the current chair of the Federal Reserve who campaigned aggressively against a full audit of the bank:

Still others kept it simple and to the point:

And, of course, some criticized the Fed’s decision to join Facebook:

At the time of this article’s publication, the Federal Reserve has not responded to any of the comments, though in light of its reputation for secrecy, it gets marginal credit for not deleting them.