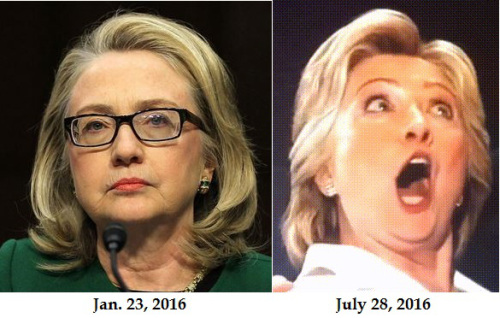 There’s an episode of the old Star Trek TV series which reminds me of Hillary Clinton.

In “Mudd’s Women,” the Starship Enterprise intercepts a cargo spaceship and its occupants — a shady character named Harry Mudd and three women. Mudd would give these Venus pills to the women. When they ingest the pill, the women are instantly transformed into beautiful sirens; without the pills, they revert to their ugly old-hag selves.

Hillary morphs like one of Mudd’s women, looking old and wrinkled one day, then is suddenly transformed into smooth-skinned “Venus” Hillary.

Here she is, back stage with Barack Obama, on July 27, 2016, the third day of the Democratic National Convention (DNC) in Philadelphia, doing her typical open-mouthed laugh.

It was this photo that alerted bloggers to the alarming hole in her tongue, suggestive of a recent biopsy for HPV tongue-cancer. Here are close-ups of the hole:

When I wrote a post on her tongue-hole on July 30, 2016, observant reader Glenn47 noted that Hillary’s “teeth are in an unnatural shape.” Reader pumpkin responded that “Her teeth have been filed on the bottom.”

I remembered Glenn47’s observation when I recently, quite by accident, came across a picture of Hillary mere days before she had her teeth done. Take a look:

Then there are her now-you-see-it-now-you-don’t wrinkles.

Here’s a photo of Hillary testifying at the Benghazi hearing on Capitol Hill on January 23, 2013, in which she made her infamous “What does it matter” outburst. See the fine lines above and the deep creases on the sides of her mouth?

And here she is 3½ YEARS later, doing a bizarre brain-freeze “woo!” reaction to the cascading balloons at the DNC on July 28, 2016:

It gives me the creeps just thinking of the torturous dental work, Botox and other cosmetic procedures that vain woman went through for her big moment accepting her Demonrat Party’s presidential nomination.

And to think she undertook all that torturous work while being so infirmed that she requires a catheter, a defibrillator vest, Diazepam injections, and help just walking up a few steps or standing up to deliver a short speech.