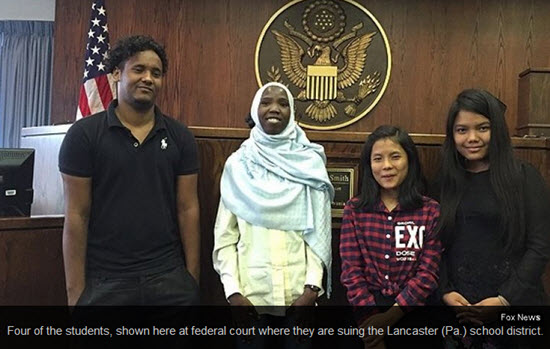 I know what you’re already thinking just from the headline. It’s probably something like “beggars can’t be choosers,” and “Wow, what a bunch of ungrateful brats who can just go back to their own country if they don’t like the free education they are being given here!” or something like that.

Here is an excerpt of what Fox News reported on this so you can get the gist:

Represented by the Pennsylvania branch of the American Civil Liberties Union, the six refugees sued Lancaster schools in federal court, saying they were dumped in a disciplinary school and are being denied access to a quality education. The students range in age from 17 to 21, and hail from Somalia, Sudan, Democratic Republic of Congo and Burma.

“[The] Plaintiffs are refugees who have fled war, violence, and persecution from their native countries,” reads a statement from the lawsuit. “Having finally escaped their turbulent environment to resettle in America, these young immigrants yearn to learn English and get an education so they can make a life for themselves.”

The refugees hoped to enter McCaskey High School, known for its superior academic program, but instead were sent to Phoenix Academy, an alternative high school for “underachieving” students in the district. Phoenix students are subject to pat-downs, banned from bringing personal belongings like watches and jewelry and forced to wear colored shirts that “correspond with behavior.”

And here’s a few quotes to give you a well-rounded picture (and for people who know what “alternative schools” are like, you’ll get it):

“…the school district has denied them an education completely or forced them into an alternative school, where they are often bullied and don’t learn.”

“Issa, who lived in a refugee camp from the age of 5 to 17…” was told she “was too old for school” and should get a job instead. “I responded that I didn’t want a job without an education,” she said.

“I have been to school before and I’ve never seen a place where they pat you down in order to enter school, and they do it every day.”

Now, ignore this story for a minute. Put away immigration politics and just focus on our schools.

Let’s be honest. America’s public schools are places where American kids are dumbed down and force fed government propaganda until they are 18. The high school near me, for example, only teaches six months each of “government” and “economics”… but requires students to take a full year of gym class. (They graduate with no idea how anything in our corrupt government or purposefully broken economy actually works, but hey, at least they know how to play basketball.) Michelle Obama’s school lunch program has been accused of inducing anorexia, and photos kids have taken of their lunches have been described as worse than what’s served to death row prison inmates. Teachers routinely “teach to the middle” using unproven standardized tests, or even worse, the mind-melting psychological disaster that is Common Core.

Our public “schools” are increasingly becoming mini-police states, where kids walk through halls without any rights under constant 24/7 surveillance by hundreds of cameras and “Student Resource Officers” — school police — walk the halls like prison guards doling out over-the-top punishments such as strip searching and arresting a middle school class clown for burping on purpose or arresting a little girl who used legal tender to pay for her chicken nuggets because an ignorant lunch lady thought this little girl’s $2 bill was fake.

It is well known that alternative schools, where the immigrant kids were placed, are for students the system has basically thrown away as “troublemakers” who are one step away from being thrown down the school-to-prison pipeline.

These immigrant kids came from camps in war-torn horrible countries in living situations akin to a daily walking, waking nightmare… and they get here and go, “Wow, your country’s schools suck.”

Before you immediately get all pissed about how they aren’t groveling over their free handout and can go back to their own countries if they don’t like it, just first take a moment and think about what kind of statement this makes about the modern state of the American public education system.