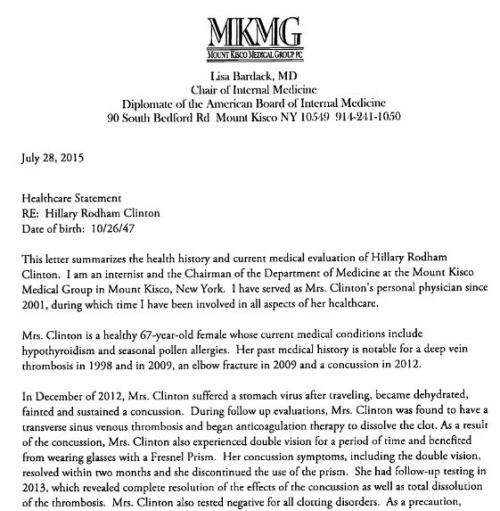 The MSM no longer even bother to conceal their partisanship, but openly admit they are abandoning all pretenses of journalistic objectivity to promote and protect Hillary Clinton. See:

The latest example is ABC News taking down the web-page of a KABC radio interview with television personality Dr. Drew Pinsky, in which he called the symptoms displayed by Hillary “bizarre” and said he’s concerned about the “1950s level of care” Hillary is receiving because “It just seems like she’s getting care from somebody that she met in Arkansas when she was a kid.”

The MSM are trying to dismiss questions about Hillary’s health as malicious rumors of “conspiracy theorists,” one of the MSM’s favorite terms of abuse, as if there are no real conspiracies.

But if all is well with Hillary, let’s just settle this once and for all.

Let’s see Hillary Clinton’s up-to-date, detailed medical records! A website is even offering a $1 million reward for those records.

But she is refusing to do that.

Fox News reports Aug. 20, 2016, that the only medical record of Hillary which her campaign released was a SUMMARY from her doctor, Lisa Bardack, more than a year ago, declaring that Hillary was “fit to serve” as president. (In contrast, 2008 Republican presidential candidate John McCain released the full 1,173 pages of his medical records.)

“a healthy 67-year-old female whose current medical conditions include hypothyroidism and seasonal pollen allergies. Her past medical history is notable for a deep vein thrombosis in 1998 and in 2009, an elbow fracture in 2009 and a concussion in 2012…. Mrs. Clinton’s current medications include Armour Thyroid, antihistamines, Vitamin B12 and Coumadin…. In summary, Mrs. Clinton…is in excellent physical condition and fit to serve as President of the United States.”

Note the careful choice of the word “include” in the phrase “whose current medical conditions include . . . .”

Below are screenshots I took of Dr. Bardack’s July 28, 2015 “Healthcare Statement” on Hillary Rodham Clinton. (You can see the original in PDF form here.)

Does this (see below) look to you like a woman “in excellent physical condition and fit to serve as President of the United States”?

Hillary Clinton being helped up the stairs to a fundraiser in Charleston, SC, Feb. 24, 2016 — the same occasion when strange bulges on her back under her roomy green coat suggest she was wearing a defibrillator vest. The black man on her left is neurologist, Dr. Oladotun Okunola, who had been seen at her side, carrying a Diazepam auto-injector pen.

And does this hole in Hillary’s tongue look like she’s “in excellent physical condition and fit to serve as President of the United States”? Seriously?

This is the same Dr. Lisa Bardack who is rumored to have penned a one-page memo stating Hillary Clinton has a form of dementia called Subcortical Vascular Dementia, as well as worsening and more frequent black-outs, uncontrollable twitching, memory loss and complex partial brain seizures from that 2012 concussion. See below.

As reported by Nick Gass for Politico — the same Politico whose chief investigative reporter Ken Vogel obligingly colluded with the Democratic National Committee (DNC) to protect Hillary — Benenson said the campaign has no plans to release Hillary’s up-to-date detailed medical records. He “sees no reason to put out an update on her health” and denounced the rumors of her ill health as “ludicrous” “trumped-up allegations” that “do not even rise to a level of rebuttal.”

A new Rasmussen Reports survey found that 59% of voters believe all major presidential candidates should release at least their most recent medical records to the public. That figure is up from 38% of Americans in May 2014, when questions about Clinton’s health were first being raised. (Incredibly, 30% of voters don’t think presidential candidates should have to release their recent medical records; 11% are undecided.)

Dr. Jan Orient, executive director of the Association of American Physicians and Surgeons (AAPS), thinks that “the questions being raised are legitimate given that it impacts who leads our nation. As a physician, you cannot help but to ask questions.” She said she has received both positive and negative responses to her recent column on the AAPS’s blog which asks whether Hillary “medically unfit” to serve as president.

Hillary’s campaign blaming legitimate questions about her health on a “right-wing conspiracy” is almost funny because, as already admitted by the New York Times and CNN anchor Chris Cuomo, it is the MSM who are engaged in a vast left-wing conspiracy to promote, protect, and conceal the truths about Hillary Clinton.