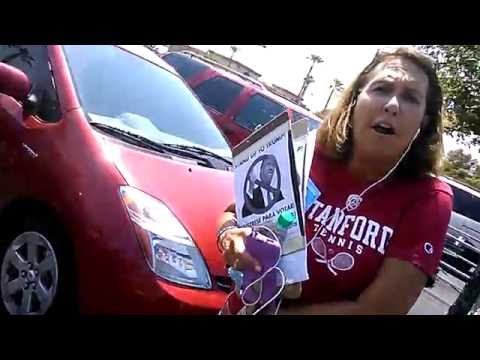 The woman in the clip, later named as Susan Berman, a PR strategist from Davis, California. is seen holding a clipboard with an image of Donald Trump crossed out underneath the words, “Stand Up To Trump! – Register to Vote”. The “register to vote” text also appears in Spanish.

“I’m working for the Democratic Party,” she states as the man shooting the video attempts to take pro-Hillary campaign material from Berman.

She then immediately makes a dash for her car while denying that she is carrying pro-Clinton material.

“This is in Las Vegas, people, it’s supposed to be non-partisan….you can’t put anti-Donald Trump stuff on the back,” states the man as Berman frantically searches for her car keys.

The man vows to “fill out paperwork with the state,” as the woman drives away before responding, “good luck with that.”

The footage clearly suggests that the woman is breaking the law by encouraging people to register in order to vote for a specific candidate;

During the video, Berman claims that the black man seen in the clip is registering as a Republican, although she is still apparently in violation of law by carrying anti-Trump material.