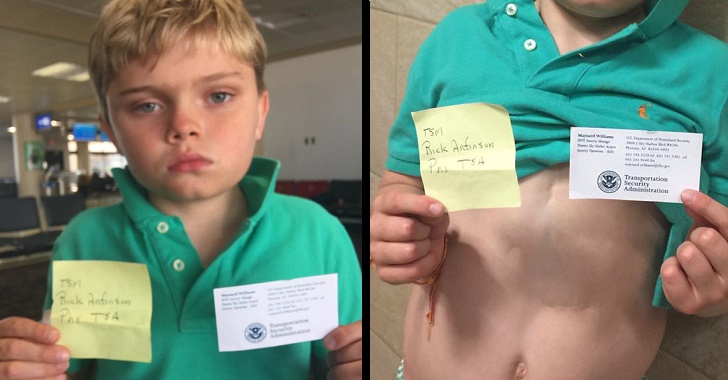 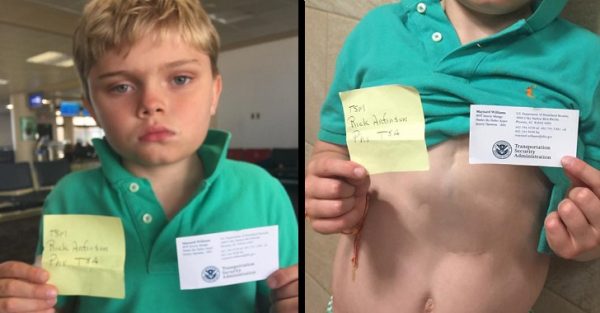 A nine-year-old boy with hopes of becoming a pilot was traumatized by TSA agents at the Phoenix Sky Harbor Airport when he was told that, because of his pacemaker for his heart condition, he was ineligible for screening.

Chille Bergstrom had been screened countless times before. His mother, Ali Bergstrom, told Anti-Media they have flown millions of miles without incident and often go to the airport early so Chille can watch the planes take off and land.

But on Saturday morning, he was told by TSA agent and manager, Agent Potts-O’Brien, that Chille would require a special exemption to make it through security. Normally, he is able to have his hands swiped with the TSA’s swab kits. But this time, his mother was told she would have to have all of her bags individually checked if she wanted her son to make it through security.

Bergstrom says Potts-O’Brien told her all of the other screenings Chille had endured without issue were performed incorrectly by all other TSA agents.

Baffled by the change in policy, Bergstrom says she asked Potts-O’Brien to check with a supervisor, whom she assumed would clear up the situation. After waiting about fifteen minutes for Mr. Maynard Williams, a security manager, to arrive in the terminal, Bergstrom and her son were told, once again, that TSA policy did not allow Chille to receive a hand swipe security check.

According to the TSA, however, individuals with pacemakers, who cannot pass through metal detectors for risk of malfunction, are eligible for alternative screenings. One of those is a traditional pat down — the alternative some people choose to body scanners — which Bergstrom says she requested for her son. The agents refused, and they also denied him the option of passing through a body scanner.

Bergstrom said in a Facebook post that, as they waited, “Strangers were literally crying along with Chille, giving me their names and numbers as witnesses ‘to this horrific situation!’”

Gwenette Bradley was another airline passenger who required special TSA attention that day. Because of a recent back surgery, Bradley was pulled off the the side area where the Bergstroms were waiting for approval. She said Ali and Chille had already been seated and waiting when she first saw them. During that time, she says she watched numerous agents crowd around her and her son, who sat on her lap. At this point, she says, Bergstrom was “hysterical” and frustrated that TSA agents would not allow her son through. Bergstrom says she became particularly upset when she was told her son would not be allowed to fly.

Bradley also clarified that, given the “unprofessional” circumstance, Bergstrom was well within her rights to be upset.

“It was very traumatic for her, and I really felt bad for her,” she said. Bradley observed that Bergstrom had provided paperwork to the TSA agents, but even as she presented the necessary documents, the authorities showed her no sympathy. Rather, she says, they encircled her, refused to speak directly to her, and whispered to each other. “They all just talked among themselves like she wasn’t there. And I thought what in the world would possess them to do that? It just wasn’t necessary at all.”

It was a such a scene, Bradley recounted, that the agents who had been assisting her rushed over to the gaggle of agents gathered around the Bergstroms.

“I kept thinking, where is the head of this bunch that will walk over here and say ‘Enough, get these people where we need to go, and let’s move on,’” Bradley said. “But nobody did that for her.”

She also said it felt like the agents were trying to minimize the visibility of the ordeal.

“Then they start rushing me off, and I thought, ‘Yeah, you guys don’t want anybody to watch this,’” she said.

“They really overstepped their boundaries,” she said.

Bergstrom says that, by the end of the ordeal, she was surrounded by 18 government agents, including ten TSA agents, four Phoenix police officers and someone she was told was “the head of the Department of Homeland Security for the entire airport.”

“They all approach us and surround us and stared at us, and it was terrifying. . . . My son has had nightmares now for two nights.”

None of them acknowledged her plight or admitted that, perhaps, Potts-O’Brien and Williams had been incorrect at first.

Rather, she was told he was ineligible for screening and that the TSA had previously stopped a child with a pacemaker who would have attempted to blow up a plane. When Bergstrom asked for more specifics, the agent (predictably) told her he was not at liberty to divulge. Ultimately, the 18 agents’ decision to single out the Bergstroms can also be attributed to the threat of “terrorism” considering the TSA and its regulations — which these officers enforced incorrectly — were created as a direct response to 9/11.

Even Chille, a young child, knew to stand up for himself. He reminded the agents that he had never had an issue and never required an “exemption” to travel.

Bergstrom told us she worried what other threats were passing through security while over a dozen government agents were crowding around her and Chille. She said Chille reminded one TSA agent, Officer Fellner, that 95% of weapons make it through TSA screening without ever being spotted.

“‘That’s a lie,’” she says Fellner told Chille. In reality, Fellner was the one lying. A report last year from the Office of the Inspector General found TSA agents failed to detect weapons in security screenings 95% of the time, a finding that prompted then-TSA Acting Administrator Melvin Carraway to be reassigned to a different department within Homeland Security.

Eventually, Bergstrom was told that all of her items had to be screened because her bags had triggered the security alarm during screening, an assertion Bergstrom disputes.

“[It was a] complete lie. My son’s jaw dropped,” she said. “Nothing triggered the alarm. That’s why they’ve been sitting here untouched. No TSA agent here has even look at it or touched it because they know that none of the alarms were triggered. Everything was fine. We were all passed through. The issue is that he has a pacemaker and he needs an alternate screening.”

She even told the agent to his face it was untrue. She invited them to rescan the bags to prove the security alarm went off and was told she would not be allowed to fly, which is when she became extremely upset. One TSA agent stood up for Bergstrom and reminded the agents she had already given permission to search her bags. They proceeded to take “every single item” out of her bags and perform swabs on them. Then, after insisting Chille could not be screened throughout the ordeal, the agents told her he had to be screened — and hand swiped.

“I have been asking for this the whole time,” Chille told them.

“They surrounded him! It was terrible! In the end, they . . . said that this wouldn’t have happened if Chille would have just submitted to alternate screening of his hands being wiped, which Chille had been BEGGING them to do for over an hour. . . . Chille said, ‘They should be fired for treating heart kids like this. They were so mean and lied and wouldn’t swipe my hands for over an hour!’”

The ordeal lasted for over an hour, and by the time it was finished, they were too late to make their flight. Bergstrom says a representative from American Airlines apologized and stressed they objected to the way the TSA treated her. They arranged for her and Chille to catch a flight 14 hours later.

As they waited in the airport, Bergstrom noticed Chille’s mood had deteriorated. “I shouldn’t even fly anymore. I shouldn’t go anywhere,” he lamented as they waited for a new flight. Bergstrom says her son usually loves to watch planes take off and land, but this time he had no interest.

Chille, who has tetralogy of fallot syndrome, has had 15 surgeries in his short life and still has more to endure. But his condition has not stopped him from experiencing life to the fullest. He attends space camp and also attends a special camp for children with heart disorders, where he has learned to advocate for himself. This is likely part of the reason why he was able to stay calm but assertive when speaking with officers.

Now he is determined to make sure no child ever has to deal with abuses from authority again. His mother says a representative from American Airlines urged her to file a complaint about the incident. She told Anti-Media that Fox News Minneapolis reported the TSA claimed to have attempted to reach out to her, but she says she hasn’t heard from anyone. The TSA did not respond to Anti-Media’s request for comment.

While it is important to remember that the Bergstroms have flown countless times without being harassed by the TSA, it is also vital to keep in mind that the conduct of the TSA in Phoenix on Saturday was not isolated to one agent. From Potts-O’Brien all the way to Maynard Williams, the head of Homeland Security at the airport and the Phoenix police, the violations of Chille and Ali’s rights were consistent across the board.

The agents at Phoenix airport have garnered so many complaints that officials have considered replacing them with private security.

Bergstrom said if the agents had apologized and admitted they were confused or wrong about procedure, the experience would not have been so negative.

“But none of that happened,” she said.

“They were just flat-out rude. They were flat-out mean. They were intimidating. They were scary. They were just these bullies, and they wanted us to submit. We can’t submit any more than sitting on a chair with my nine year old in my lap as we’re sobbing surrounded by 18 people in authority. There’s no more submission than that.”