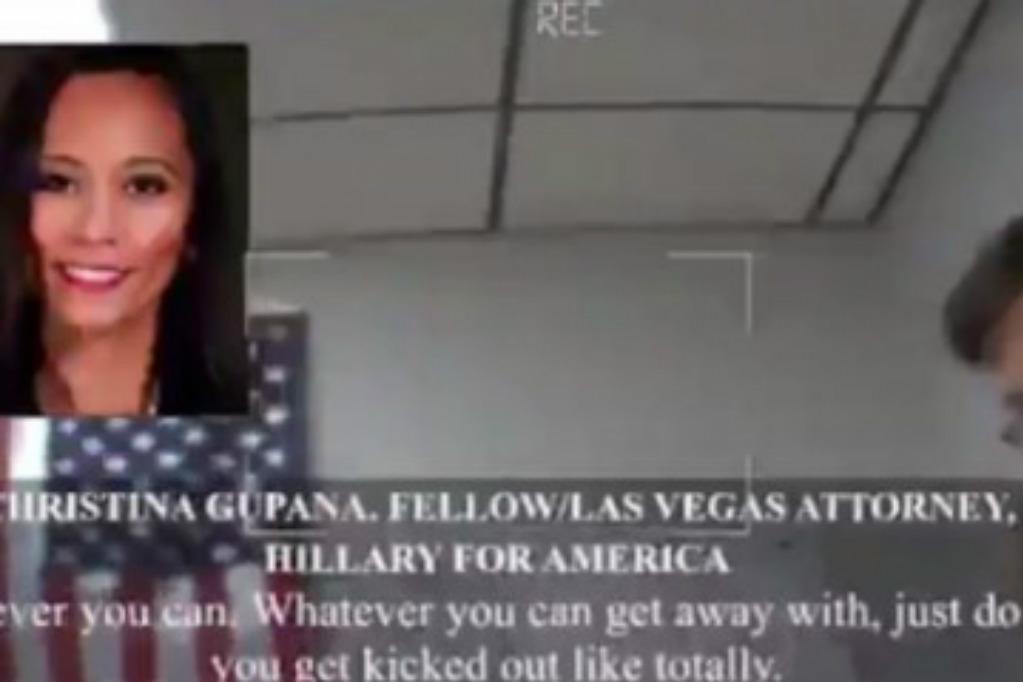 In 2015, James O’Keefe’s Project Veritas revealed undercover footage of a Democrat attorney and Hillary For President’s campaign manager talking about voter registration laws and told volunteers in Nevada, “Whatever you can get away with, just do it. Until you get kicked out, like totally.“

Christina Gupana, a Las Vegas attorney and Clinton campaign manager spoke to volunteers and uttered those words implying that they were to do whatever they could get away with, not what was necessarily lawful.

Seems to me the video evidence should be used to disbar Ms. Gupana from practicing law or ever being engage in political activity of this nature again.

Of course, this was not the only problem. The video also revealed that Hillary campaign workers were violating voter registration laws in Nevada by being openly partisan during registration efforts. On top of that, they knew it was against the law.

One example of that partisanship was demonstrated by Phillip Kim, who is a paid organizer for Hillary For America.

“So you are center right or center left?” he queried. “I would say Hillary is your girl. You should go for a Democrat, but I can’t tell you to do one or the other, that’s not my job, so, I’m let you decide.”

So, it’s not his job, but he just said the person he was talking to should vote for a Democrat and that Hillary was that Democrat! Unbelievable!

Another criminal caught on video was Henry Engelstein, fellow with Hillary For America.

“Did you hear what happened?” He said. “Complaints at the thought we were doing partisan voter registration. The lady she works the library, she came out with the Nevada statute books and opens it up and starts reading the statute about how you’re allowed to get voter reg.”

He was interrupted by Ms. Gupana who asked, “Wait, so what does she see the caucus cards?”

Engelstein said that they had a sign on the table, indicating he was in violation of the statute.

Mr. Kim added, “Like within the law, we talk about ask for forgiveness not for permission.”

In other words, he knows he is not within the law but willing to break it and ask for forgiveness later.

“Typically the style of campaigning that we do is like, we just ask, do they support Hillary Clinton.” Added Harrison Lee. “And if we’re not allowed to do that, then we ask for forgiveness.”

Well, clearly, you are not allowed to do that, so why ask? It’s because you are a lawless person.

“A county clerk, field registrar, employee of a voter registration agency of person assisting a voter… shall not:

According to the statute, a violation is considered a felony and can result in $20,000 in fines.