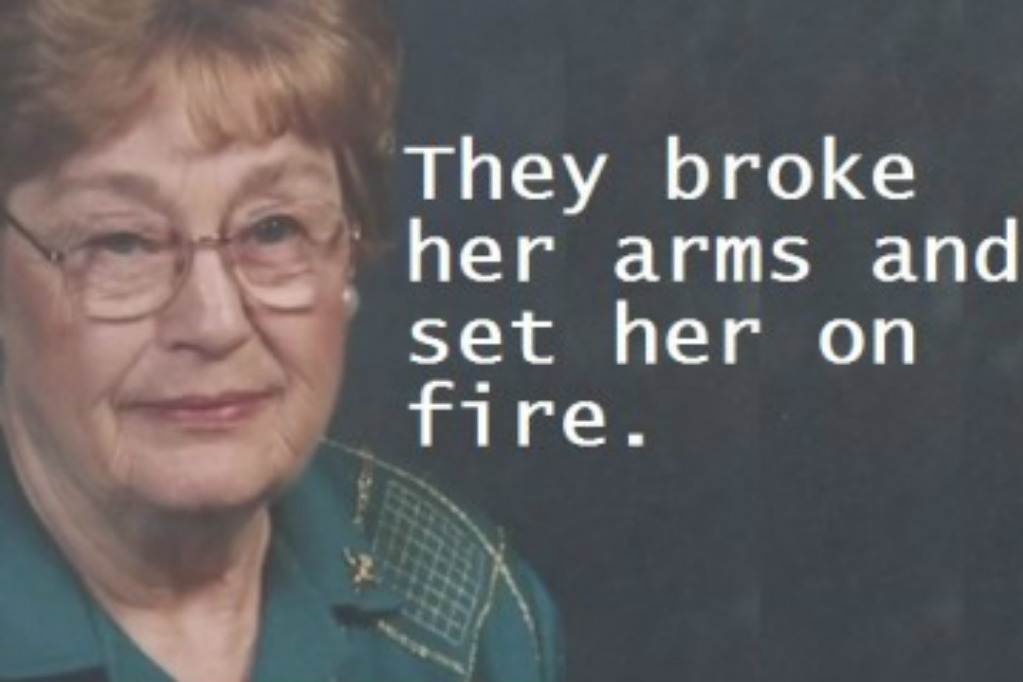 An elderly woman was badly beaten and set on fire after three black males and two black females attacked her, broke her hand and arm and set her on fire.

Dorothy Dow, an 83-year-old great grandmother, was already in bed when the men forced their way in to her home. They demanded cash from her, but when she refused, one of the men began to pistol whip her.

“Once they entered the home, one individual entered her bedroom where she was already in bed,” Meriwether County Sheriff Chuck Smith told WGCL-TV.

Another of the suspects set her on fire.

Yet, though she was on fire, she managed to put out the flames and call 911.

“With one hand broken and her arm broken in four places, she pulled the top off of the gallon of water, poured it over her head and put out the fire,” Beth Dow, the victim’s daughter-in-law, told WGCL-TV. “She then drug herself into the den on her broken arms to get to her cellphone to call 911. She said, ‘I thought they were going to kill me’. They told her that she was never going to see her sons again.”

According to the Ledger Enquirer:

Sheriff Chuck Smith identified the suspects as Justin Pierce Grady, 38, of Grantville, Cortavious Deshun Heard, 18, and Shanquavious Keontrell Cameron, 17. All are held without bond in the county jail. Grady and Heard previously worked at the home where the break-in occurred, the sheriff said.

Heard listed addresses in Grantville and Hogansville. He faces the same eight charges as Grady and three additional charges in connection with the theft of the woman’s purse.

The Times Herald adds that two more women were arrested:

Additionally, Harmon will be charged with a separate incident that occurred on Aug. 2 where Dow’s purse with contents turned up missing, according to Sheriff Chuck Smith.

Here’s what I want to know, where are the Black Lives Matter people condemning the actions of those in their community engaging in such diabolical, criminal actions against a great grandmother? All I hear are crickets. I hear crickets from the Obama administration, the mainstream media and the BLM. What do you think?