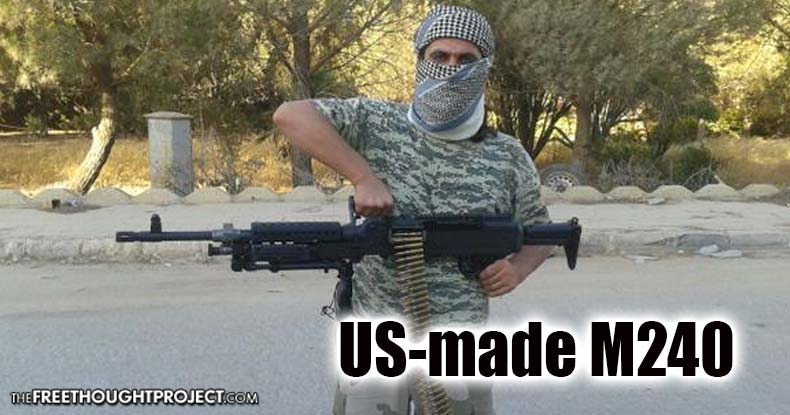 Over half of 1.4 million guns U.S. shipped into Iraq and Afghanistan after 9/11 are unaccounted for in DoD’s own records, watchdog discovers

The U.S. government has shipped over 1.4 million guns to Iraq and Afghanistan since 9/11, according a new analysis by the U.K.-based watchdog Action on Armed Violence (AOAV), but the Pentagon is only able to account for fewer than half of them.

AOAV released its analysis of publicly available data on U.S. Department of Defense (DoD) contracts on Wednesday, and added that when requested to provide its own accounting for the small arms provided to the war-torn nations, “the DoD data shows that over 700,000 small arms were sent from the U.S. to Iraq and Afghanistan within these periods. However, this amount only accounts for 48 percent of the total small arms supplied by the U.S. government that can be found in open source government reports.”

AOAV also noted that the total number of small weapons the U.S. provided to Iraq and Afghanistan is likely to be far higher than even the group’s count, as the Pentagon kept such shoddy records of the planeloads of weapons it dispatched to those countries—if it kept any records at all.

“Since the Sept. 11 terrorist attacks,” observed C.J. Chivers in the New York Times Magazine, “the United States has handed out a vast but persistently uncountable quantity of military firearms to its many battlefield partners in Afghanistan and Iraq. Today the Pentagon has only a partial idea of how many weapons it issued, much less where these weapons are. Meanwhile, the effectively bottomless abundance of black-market weapons from American sources is one reason Iraq will not recover from its post-invasion woes anytime soon.”

“This failure shows the lack of accountability, transparency and joined up data that exists at the very heart of the U.S. government’s weapon procurement and distribution systems,” AOAV wrote.

All together, the sheer size of the expenditures, the sustained confusion about totals and the multiple pressures eroding the stock combine to create a portrait of the Pentagon’s bungling the already-awkward role it chose for itself—that of state-building arms dealer, a role that routinely led to missions in clear opposition to each other. While fighting two rapidly evolving wars, the American military tried to create and bolster new democracies, governments and political classes; recruit, train and equip security and intelligence forces on short schedule and at outsize scale; repair and secure transportation infrastructure; encourage the spread or restoration of the legal industry and public services; and leave behind something more palatable and sturdy than rule by thugs.

Any one of these efforts would be difficult on its own. But the United States was trying all these things at once while buying and flying into both countries a prodigious quantity of light military weapons and handing them out to local people and outfits it barely knew. The recipients were often manifestly corrupt and sometimes had close ties to the same militias and insurgents who were trying to drive out the United States and make sure its entire nation-building project did not stand. It should not have been a surprise that American units in disaffected provinces and neighborhoods, and their partners, could encounter gunfire at every turn.

Today, “no one knows where many of the weapons are, until they turn up on social media or announce themselves in combat or crime with the crack of incoming fire, a reminder of tens of billions of dollars gone into nations where violence and terrorism continue apace,” Chivers wrote.

“What to do?” the Times reporter wondered. “If past is precedent, given enough time one of the United States’ solutions will be, once again, to ship in more guns.”