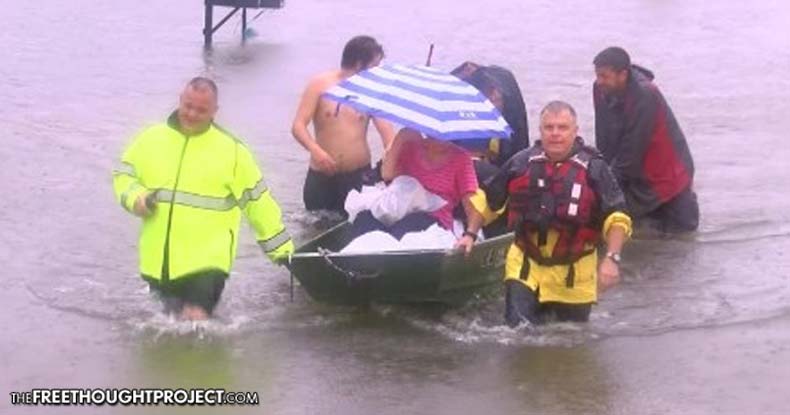 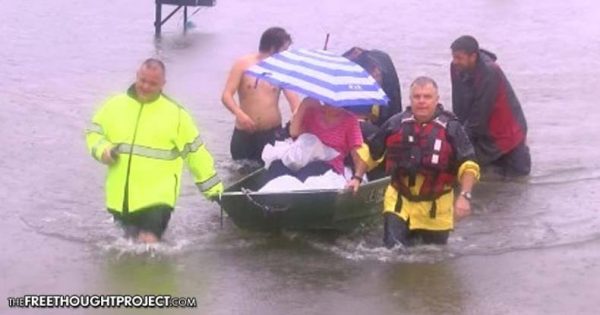 Just under two weeks ago, Louisianians were hit with what meteorologists dubbed a ‘1,000-year’ flood. Tragic displays of people losing their homes, death tolls, images of destruction, and general chaos dominated mainstream media. However, when the rain stopped — so did the media’s coverage.

After the rain stopped, however, is when the real suffering began as people began to assess the damage to their homes. But as soon as the shock subsided, individuals pooled their resources and an immediate and private recovery effort was underway.

Conveniently, as we pointed out last week, the media chose to ignore it — as it was not divisive enough to report.

In spite of the lack of media coverage, amazing things were happening in Southern Louisiana.

Nearly two weeks later, some homes along the river are still underwater. But that did not stop people from banding together and helping everyone out. Those who did not flood helped those who did — race and political beliefs did not matter — nor did anyone sit around and wait for the government to rush in to rescue them.

There are tens of thousands of houses across the state which now look like the one in the image below, taken a few miles from my home, and people are still helping others. However, it will take a lot of money to get things back in order — a lot of money that the people of Louisiana do not have. Because this level of rain was unprecedented, houses that have been here for decades and have never flooded, actually got water. Because these houses, under normal conditions, are not labeled as being in a flood zone, many of these folks did not need to buy flood insurance. As a result, most of the houses that flooded will not be covered by their homeowner insurance plans — leaving them completely and utterly devastated.

This catastrophe, however, has united the community and shown how people, not government, are able to pick up the pieces.

Before the national guard was deployed, members of the community rescued thousands of people from their homes. Instead of waiting idly by for the state to act, the people of Louisiana used their own boats, and formed a “Cajun Navy.”

A Facebook group was formed in which people would post their GPS location and within minutes, community members in their boats were there to save them. This private effort is undoubtedly responsible for saving the lives of thousands — not to mention, their pets and livestock too.

As Kevin Boyd wrote in FEE.org,

The people of Louisiana also distributed immediate relief to their displaced neighbors much more efficiently than the government was able to. One of the best examples of this was the conversion of a movie studio into a shelter housing over 2,000 people. The Celtic Media Centre is one of Louisiana’s premier film production studios located in Baton Rouge, which was one of the cities hardest hit by the flooding. The studio’s executive director, Patrick Mulhearn, saw how devastated his neighbors were by the high water and decided to open up Celtic as an emergency shelter.

Celtic was able to shelter over 2,000 evacuees in large, open, and air conditioned sound stages that were not being used for filming at the time. The shelter was supplied at first by local volunteers who donated food, water, and clothing to those affected by the storm. Volunteer doctors and other medical personnel, themselves often flood victims, set up a clinic in Celtic.

Importantly in a pet loving state like Louisiana, Celtic was open to pets as well. Many people did not evacuate during Hurricane Katrina in 2005 because their pets were not welcome at shelters.

Churches also opened their doors to those in need and took up food and supply donations for families in need. Days before the Red Cross or the government showed up, people were already being sheltered, fed, and cared for.

Instead of waiting for FEMA, private individuals launched Facebook groups in which people could list their needs and those who had the means of fulfilling those needs, would act. Meanwhile, FEMA is passing out flyers at Costco.

Groups of volunteers were walking house to house in the hardest hit areas and going to work. As soon as the flood waters receded, demolition, floor, and sheetrock removal were underway. All of this was done by volunteers — without costing the homeowners or taxpayers a dime. As Boyd points out, the wait for help from the government, that never came, after Katrina led to the deaths of 1,500 people.

I, personally, was part of a massive rescue effort during Katrina, very similar to the ones that took place this time. I was part of a caravan of over 1,000 boats from around the area who met up and headed to New Orleans to save people. However, we were headed off by police and national guard who told us that we’d be arrested if we attempted to launch our boats and save people.

Luckily, that didn’t happen this time.

While the Federal government was giving anti-discrimination lectures to flood victims, reports Boyd, the Cajun Navy was rescuing people of all races. Louisiana has come together like never before.

Aside from the individual efforts, private business, both national and local, came to the aid of victims as well. Nearly every grocery store in town has tents set up in their parking lots to take in donations for families in need. Go fund me accounts were set up for those who had no flood insurance. Local businesses, like Parish Ink, sold special items and donated 100% of the proceeds to flood victims.

As government scrambles to manage public relations, the recovery and aid are well under way — thanks to the private efforts of non-government entities. Louisiana has a long way to go before we are fully recovered, but one thing is certain — the community, not the state, will make sure that recovery is successful.