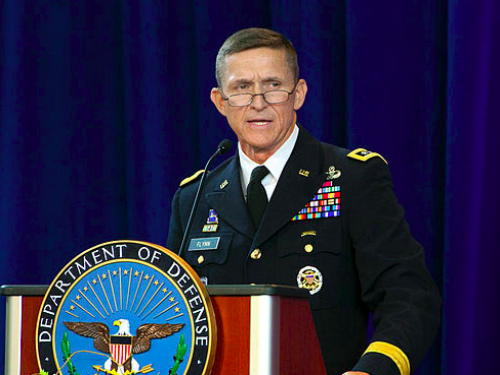 Retired Lt. General Michael Flynn had a frightening revelation for listeners of the Breitbart News Daily radio program. He explained that nations like Iran are “cutting deals” with drug cartels along the Mexican border, so that state sponsored terror groups like Hezbollah can travel easily into the United States.

“I know from my friends in the Border Patrol in CBP that there are… radical Islamist countries, state-sponsored, that are cutting deals with Mexican drug cartels for some of what they call the lanes of entry into our country. And I have personally seen the photos of the signage along those paths that are in Arabic… they’re like way points along that path as you come in. Primarily in this case the one that I saw was in Texas and it’s literally… signs in Arabic… [that say] ‘this way, move to this point’…”

He went on to explain that Hezbollah is using these channels to traffic humans and drugs into the United States. Though he didn’t specify, Flynn implied that Iran isn’t the only government, and Hezbollah isn’t the only terrorist group, that is working closely with the drug cartels.

Flynn is the former director of the Defense Intelligence Agency before he was forced into retirement for clashing with the Obama Administration. He has consulted Donald Trump on foreign policy matters, and until last month was considered a possible running mate for Trump.