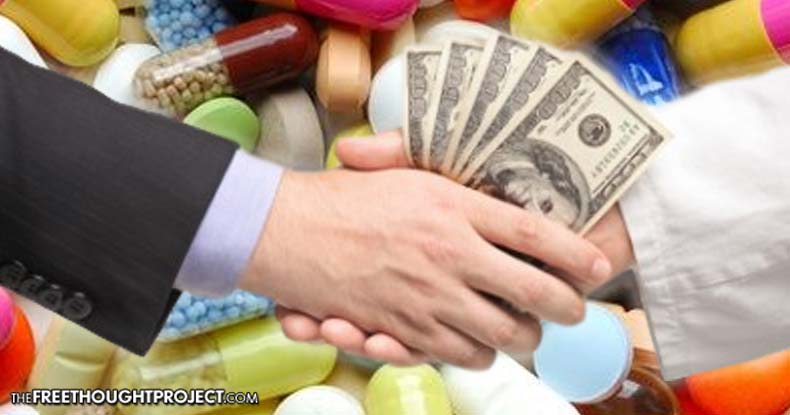 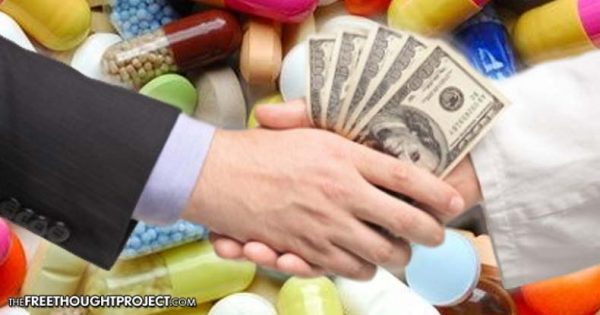 In what can only be described as paradigm-shattering research on drug prices, the Journal of the American Medical Association has officially recognized why drug prices skyrocket in America. Big pharma is granted a monopoly by the State which effectively eliminates their competition and allows them to charge any price they want — so they do.

The new paper, published on August 23, “The High Cost of Prescription Drugs in the United States: Origins and Prospects for Reform,” set out to “review the origins and effects of high drug prices in the US market and to consider policy options that could contain the cost of prescription drugs.”

What the paper’s authors, Harvard Medical School doctors Aaron Kesselheim and Jerry Avorn, and jurist Ameet Sarpatwari, found and subsequently admitted, shatters the very assertion that government regulation in the market is needed to keep medical care costs low. In fact, their findings were quite to the contrary.

The most important factor that allows manufacturers to set high drug prices is market exclusivity, protected by monopoly rights awarded upon Food and Drug Administration approval and by patents.

Nothing is wrong with making a drug that saves lives and profiting from it. However, when the profits are a direct result of government involvement, it no longer becomes an issue of innovation and the market, but rather an issue of a State-granted monopoly.The costs associated with studying, testing, and getting new drugs approved can be staggering, and the money made from selling the new drug is often used to pay for future drugs as well as paying back investments made to produce the current ones. Unfortunately, the people involved in creating life-saving drugs cannot work for free.

Although prices are often justified by the high cost of drug development, there is no evidence of an association between research and development costs and prices; rather, prescription drugs are priced in the United States primarily on the basis of what the market will bear.

Increasing the market price of an item to the maximum profit per unit is a natural function of the free market. And, contrary to what the pro-government regulation sect asserts, this increase in price in relation to supply coupled with competition, happens to work toward keeping prices down — unless these prices are protected by a government-granted monopoly.

As the paper points out:

The most important factor that allows manufacturers to set high drug prices for brand-name drugs is market exclusivity, which arises from 2 forms of legal protection against competition. Together, these factors generate government-granted monopoly rights for a defined period. Initial regulatory exclusivity is awarded at FDA approval.

While the Journal of the American Medical Association is finally admitting the reason for skyrocketing drug prices, Austrian economists have been pointing this out for decades.

Ludwig von Mises correctly explains the situation in the statement below:

As has been pointed out already, there is no such tendency toward monopolization. It is a fact that with many commodities in many countries monopoly prices prevail, and moreover, some articles are sold at monopoly prices on the world market. However, almost all of these instances of monopoly prices are the outgrowth of government interference with business. They were not created by the interplay of the factors operating on a free market. They are not products of capitalism, but precisely of the endeavors to counteract the forces determining the height of the market prices. It is a distortion of fact to speak of monopoly capitalism. It would be more appropriate to speak of monopoly interventionism or of monopoly statism.

A glaring example of the staggering discrepancies in American drug prices can be seen in the remarkable drug for Hep C, sofosbuvir. Sofosbuvir boasts a near miraculous cure rate of 84-96% for Hep C.

However, the American version of the drug Solvaldi by Gilead, which has an FDA-granted monopoly protecting it, will cost patients a mountainous $84,000.

In India, however, Gilead has to compete in a free market. Competitors, of which there a many, using the older, much cheaper, and equally effective drug, have driven the price down to a mere $4 a pill. This makes the total cost of curing Hepatitis C in India’s free market — $336.

Because the FDA has become little more than a revolving door for the pharmaceutical industry to continually grant itself special privilege, the natural checks and balances of the market do not apply and we see seemingly insane price differences when compared to other markets.

One example of this revolving door is FDA member, Milton Packer, who chairs the Cardiovascular and Renal Drugs Advisory Committee. Packer, who reviews applications for drugs submitted for FDA approval, is financed by Novartis and actually spoke on their behalf to the advisory board that he chaired.

And Packer is only one example, the list goes on.

The timing of this paper is impeccable given the recent hoopla in the news on the absurd price hike of EpiPens. Mylan CEO, Heather Bresch – daughter of Senator Joe Manchin (D-West Virginia) — is on the receiving end of the FDA’s power to monopolize drugs. As a result of her monopoly, no one can compete with Mylan which has grown Bresch’s annual salary from $2.4 million in 2007 to $18.9 million in 2015.

Again, there is nothing wrong with making money. But, when that money is made at the expense of everyone else — freedom loses.

While the mainstream media often acknowledges that these drug companies charge exorbitant prices for their medications, they conveniently leave out the reason they can do so is because they have the full support of Uncle Sam.

Instead of looking at the corrupt government, who has the unique ability to create and sustain monopolies, the evil market is blamed, and people ironically call for more government – thus creating a vicious cycle of corporatism.

Hopefully, this admonition in JAMA, by these doctors from the Harvard Medical School, opens the eyes of those who continuously cry for more regulation to control prices. We’ve seen where that’s gotten us.

Here at the Free Thought Project we agree with the authors when they say:

High drug prices are the result of the approach the United States has taken to granting government-protected monopolies to drug manufacturers, combined with coverage requirements imposed on government-funded drug benefits. The most realistic short-term strategies to address high prices include enforcing more stringent requirements for the award and extension of exclusivity rights; enhancing competition by ensuring timely generic drug availability.