It’s all over the news that Anthony Weiner sent “one sext too many” and top Hillary Clinton aide Huma Abedin is finally calling it quits and ending their marriage.

Because, it was such a wonderful marriage… 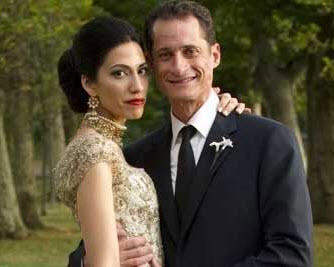 Gosh she looks so happy…

Most people recognize how much of a sham their relationship was from the beginning. Saying these two (look at her face above on their wedding day, she looks super thrilled) had a legitimate marriage is like saying Hillary and Bill Clinton’s marriage is real and not a cover under which they further their political dynasty power interests.

Now Huma is back in the news and the Clinton Foundation is officially under investigation (not that it will go anywhere while FBI Director Comey, who has been covering for the Clintons for decades, is in charge but whatever), and despite fake pickle jar openings on Jimmy Kimmel Live, Hillary’s health issues are not quietly going away either.

This camp needed something to draw attention away from all this bad press.

Thus, you have Weiner caught sexting a picture of his crotch next to his sleeping baby???

First of all, who would even do that?

Secondly, come on already. How many times has this man been “caught” doing this? Even a toddler learns that he will burn his hand if he places it on a hot stove enough times. Are we really supposed to believe Anthony Weiner is this much of a drooling idiot? If he’s really this stupid, it’s surprising he can tie his shoes in the morning without killing himself.

No. This was perfectly timed to draw attention away from what’s really going on that could mar Hillary’s ascension to the White House throne. That throwaway marriage was always there for distraction and cover purposes. Now it’s serving it’s final purpose like the joke it has always been.

This photo is even making the rounds as the moment Hillary heard the news about the Weiner’s latest sext:

AP photo of Clinton leaving a fundraiser last night. Wonder what she was looking at on her phone pic.twitter.com/aVAG737o4K