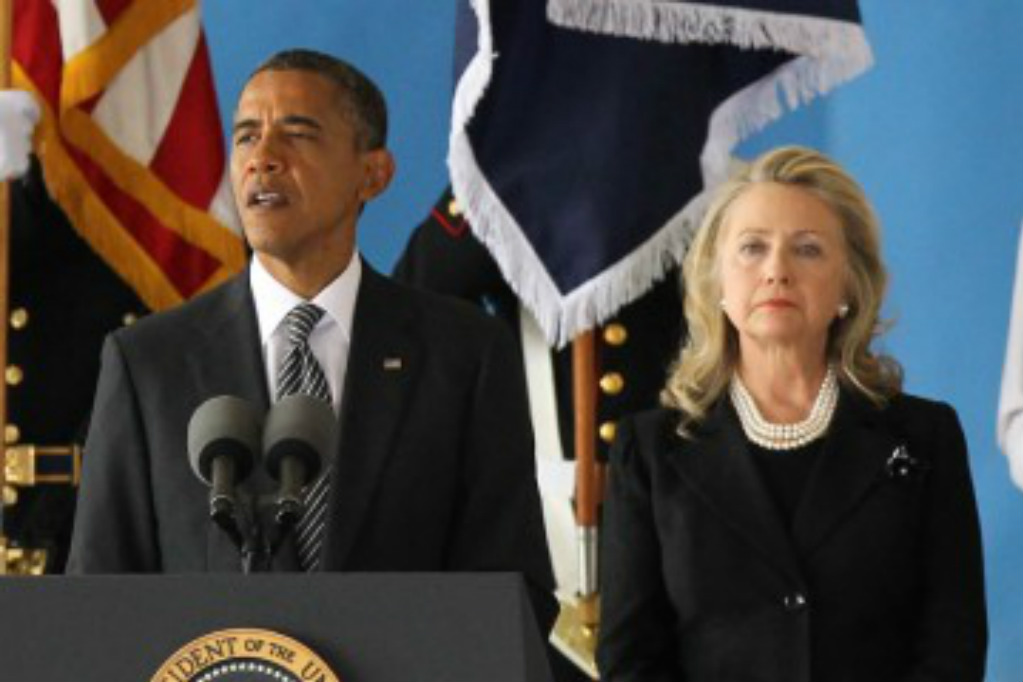 For months now, one official after another, whether retired or still in the administration, pops up accusing Hussein Soetoro and/or Hillary Clinton of some impropriety, crime or basically not performing their job duties. The latest to level these complaints against the Criminal-in-Chief and the former Secretary of State is retired Lt. General Michael Flynn. Flynn, who served two years under Hussein Soetoro as the director of the Defense Intelligence Agency (DIA), informed Breitbart News in an exclusive interview surrounding his book The Field of Flight

stated both Clinton and Soetoro refused to hear intelligence that “did not fit their ‘happy talk’ narrative about the Middle East.”

In fact, he alleged the administration actively scrubbed training manuals and purged from the military ranks any thinking about the concept of radical Islamism. Flynn argued that this effort by Obama, Clinton and others to reduce the intelligence community to gathering only facts that the senior administration officials wanted to hear—rather than what they needed to hear—helped the enemy fester and grow, while weakening the United States on the world stage.

“The administration has basically denied the fact that we have this problem with ‘Radical Islamists,'” Flynn said during the interview. “And this is a very vicious, barbaric enemy and I recognize in the book that there is an alliance of countries that are dedicated basically against our way of life and they support different groups in the Islamic movement, principally the Islamic State and formerly Al Qaeda—although Al Qaeda still exists. The administration denied the fact that this even existed and then told those of us in the government to basically excise the phrase ‘radical Islamism’ out of our entire culture, out of our training manuals, everything. That was a big argument I had internally and I talked a little bit about it in the Senate testimony that I gave two years back.”

This is nothing new. In fact, previous reports indicated Obama rarely attended any intelligence briefings, preferring to “read” the reports. Americans already knew departments under Hussein Soetoro were scrubbing training manuals referencing Islam and substituting constitutional supporting individuals, groups and patriotic organizations as potential terrorists. Here Flynn admits his knowledge of the usurper-in-chief’s refusal to address issues that compromised national security; yet, he, along with many others, did not hold the traitor accountable.

Flynn went on to further implicate Hillary Clinton and Hussein Soetoro in their actions to brush aside the intelligence neither wanted to hear about happenings in the Middle East.

“There’s a narrative that the President and his team, including Hillary Clinton, wanted to hear—instead of having the tough news or the bad news if you will that they needed to hear,” Flynn said. “Now, there’s a big difference. And the one thing about intelligence is we should stand for truth to power—meaning we should always say what we believe, and lay the facts out, lay the tough right facts out and then you let the policymakers make the decisions that they have to make. What has happened in the last 10 years, frankly in the last 8 years, is we have seen a level of dishonesty coming out of both the policy and the decision making structure with the American people.”

Because of Hussein Soetoro‘s and Hillary Clinton’s unwillingness to hear the entire facts and happenings concerning the Middle East, along with others in the administration, Flynn accused Soetoro of presenting a “narrative to the American people about the war on terrorism and radical Islamism that is simply inaccurate.”

“The President has said they’re jayvee, they’re on the run, they’re not that strong, what difference does it make what we call—that’s being totally dishonest with the American public,” Flynn said. “There’s one thing that Americans are, and we’re tough, resilient people but we have to be told the truth. I think what a lot of this is, in fact what I know a lot of it is. It’s a lot of happy talk from a President who did not meet the narrative of his political ideology or his political decision-making process to take our country in a completely different direction and frankly that’s why I’m sitting here talking to you here today, Matt. The intelligence process starts really at the ground level, but the priorities—the priorities, Matt, for an intelligence system and the intelligence community in our country and that’s the President of the United States.”

With this being known by Flynn, as well as the American public from statements made by Hussein Soetoro, no one in Congress pegged Soetoro for his mishandling of threats against the united States. Instead, those inside the Beltway turned a blind eye, refusing to hold the man accountable. Now, Flynn comes out pointing the finger at Soetoro and Clinton only to support a book. Where was he when all of this was happening?

Flynn then went on to declare that the Hussein Soetoro’s administration refusal to seriously consider these threats “allowed an enemy that is using very smart, savvy means to impact our way of life.”

“That means infiltrating into refugee populations, that means conducting of smart information operations,” Flynn said. “Most people don’t know but these guys have very sophisticated information operations going on, with publications of magazines and websites. They have leaders in their groups that have thousands and thousands—I’m talking tens of thousands of followers on social media and Instagram and Twitter. So we are not even allowed to go after these kinds of things right now. This is the problem—it’s a big problem. In fact, if we don’t change this we’re going to see this strengthening in our homeland.”

This is old rhetoric. Americans know it. The media knows it, as well as those in Congress. Yet, Republicans and Democrats alike are beating down the door to support, in some way, illegal alien invasion, amnesty, and “refugee resettlement” in order to garner votes in upcoming elections.

Flynn stated there was a plan that could defeat “radical Islam” which the Obama administration continually ignores.

“The very first thing is we have to clearly define the enemy and we have to get our own house in order, which this administration has not done,” Flynn said. “We have to figure out how are we going to organize ourselves. Then I call for in the book a new 21st century alliance. This is where we really come to how we take the Arab community to task on how they plan to fix this cancerous disease inside of their own body that has metastasized and grown exponentially over the last five or six years and certainly actually over the last eight to 10 years. So it’s one thing to go after the ideology, just like we went after Communism for 40 years, but I also say in the book we have to crush this enemy wherever they exist. We cannot allow them to have any safe haven. We are dancing around the sort of head of a pin, when we know these guys are in certain places around the world and our military is not allowed to go in there and get them. The ‘mother may I’ has to go all the way back up to the White House.”

Non-military citizens have been saying for quite some time now the enemy has to be clearly defined and our own republic has to be in order – meaning, our government adheres to the Constitution. One would think this republic would already be organized as far as all structures go, including the military. While Flynn suggests taking the Arab community to task “on how they plan to fix this cancerous disease inside of their own body that has metastasized and grown exponentially,” the assumption is made that the Arab community wants to rid the Middle East of these terrorist groups. Flynn, being director of the DIA, should know these Arab nations are inherently Muslim, governed by Sharia Law, and do not view these groups in the same manner as western civilization. Moreover, Flynn fails to recognize the united States’ continued “friendship” with these Muslim nations that support terrorism, malign the united States, and subjugate our republic because of our need for oil. Our republic has no leverage of influence because of our dependence on Middle Eastern oil.

Flynn goes on to suggest “we went after Communism” in a fervor that would indicate communism was eradicated. It’s not. If his comments about communism sound familiar, Flynn made almost the exact same statement in June of 2016 in another interview promoting his book. While Flynn accuses the Hussein Soetoro administration of refusing to clearly identify the enemy, he does it repeatedly by his references to “radical Islam.” Islam is Islam, which means Islam is the problem, period. He suggests the fight against Islam should follow the republic’s fight against Communism.

“There’s no enemy that’s unbeatable,” Flynn said. “We can beat any enemy. We put our minds to it, we decide to do that, we can beat any enemy. And there’s no ideology in the world that’s better than the American ideology. We should not allow, because they mask themselves behind the religion of Islam, we should not allow our ideology, our way of life, our system of principles, our values that are based on a Judeo-Christian set that comes right out of our Constitution—we should not fear that. In fact, we should fight those that try to impose a different way of life on us. That’s what we did against the Nazis, that’s what we did against the Communists for the better part of a half a century—in fact, more than half a century. Now we are dealing with another Ism, and that’s radical Islamism, and we’re going to have to fight it—and we’re going to be fighting it for some time. But tactically we can defeat this enemy quickly. Then what we have to do is we have to fight the ideology, and we can do that diplomatically, politically, informationally and we can do that in very, very smart ways much greater than we’re doing right now.”

Someone should ask Flynn how he figures the fight against communism was won since there are still many communist oppressive regimes operating in the world today intent on targeting our republic.

Flynn goes on to talk about his time as director of the DIA, praise Donald Trump and relay his release by the administration for saying what they didn’t like. He talked about the future and what he wanted for his grandchildren. Yet, what did Flynn do while in the administration to stem the tide of this usurping administration? What has he done since, except write a book and repeat the same rhetoric, to thwart the administration’s debacles and infringements on liberty and freedom?

In looking at his statements in June and with Breitbart, Flynn has his “rhetoric” memorized, repeating it, although in different format and wording, over again. Flynn is operating in “sell a book” mode. As has been common with former presidents, administration tools, and others who have written books, Flynn wants to profit from his complicity by writing a “tell all” while excusing himself from accountability.