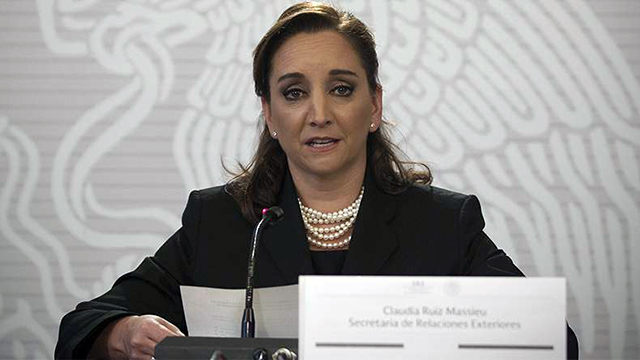 Ever since Congress usurped its constitutional authority and began imposing illegal and unconstitutional restrictions on arms, which amounts to “infringing” on the rights of the people to both keep and bear them, Americans have sat back and allowed them to continually attack those rights. Now, even people from around the world are calling on the US government to ban guns. The latest to do this is Mexico’s Foreign Minister, Claudia Ruiz Massieu.

Though the story originates from a Chinese news site, it has been picked up by the National Rifle Association’s Institute for Legislative Action and other pro-gun rights outlets.

According to New China:

Mexico’s Foreign Minister Claudia Ruiz Massieu on Monday asked the U.S. Congress to restrict the sale of assault weapons as “they cause harm on both sides of the border.”

Ruiz Massieu made this call at the Second Conference of States Parties to the Arms Trade Treaty of the United Nations in Geneva, Switzerland.

According to a statement by the Foreign Ministry, Ruiz Massieu said Mexico “places the highest priority” on this matter, as the country has suffered from the illegal arms trade, with assault weapons often legally bought from gun shops across the border in the U.S. and transported illegally to Mexico.

The woman has obviously never been to America to purchase a gun. She uttered one of the most ridiculous statements that rivals anything we’ve heard coming out of the Communists in the White House and in our own Congress.

I don’t remember going through a background check to get breakfast products, do you? I don’t remember having to provide identification to purchase those items either. Even felons can purchase milk and cereal, right?

In Massieu’s speech (Read the full text here) she said, without actually naming the united States, but the insinuation was there, “But these efforts are limited by the thousands of illegal weapons who come every year to our country from our northern border where the largest producer and exporter is.”

She went on to make it clear who she was referencing as she cited 23,000 licensed gun dealers in US border states, even going so far as to claim that guns can be purchased at “fairs, online and even in major supermarkets in the country.”

Again, supermarkets? Fairs? This woman is just lying through her teeth.

I’m sure that much of it could. We already know this administration has been outed by a cartel member who said that Operation Fast and Furious was all about trafficking weapons to Mexican drug cartels. We know the Obama administration has been involved in arms trafficking in the Middle East and we know that the Pentagon, under Obama, has lost roughly 700,000 guns that were shipped to the Middle East.

But does Ms. Massieu put any blame on Barack Hussein Obama Soetoro Soebarkah? Nope, she praises him for calling for the same thing she is saying.

“In this regard, Mexico welcomes the tenacious and sincere efforts of President Barack Obama to establish administrative measures to strengthen controls on the possession and sale of weapons,” stated Massieu.

Furthermore, Guns.com points out the real numbers from reports:

As for the figures mentioned by Massieu in her speech, earlier this year a U.S. Government Accountability Office report, requested by New York Democrat U.S. Rep. Eliot L. Engel, delved into the 104,850 firearms seized by Mexican authorities and submitted for tracing by the ATF from 2009 to 2014. Of that figure, 73,684, or 70 percent, were found to have originated in the United States.

The report went on to explain most were purchased legally and about 41 percent came originally from Texas gun shops. However, it should be noted the Swiss-based Small Arms Survey put the blame on illegal weapon imports into the country on a mix of foreign gangs, Asian sources, local illegal production, and guns coming over the U.S. border. The group estimated there were upwards of 10 million unregistered guns in private hands in the country.

In contrast to the ability to legally purchase guns in Mexico when compared to the U.S., the country of 120 million has a single gun store with a limited selection, and is managed by the Army. As noted by the Washington Post earlier this month, the store’s volume has increased from 549 guns sold in 2000 to 10,115 last year as crime escalates in the country.

Ms. Massieu, pay attention to what is happening in your own country. Clean it up instead of allowing your corrupt government to coddle criminals cartels in Mexico. Second, stay out of the US’s business! We have laws here. You are seeking to undermine them with your rhetoric.