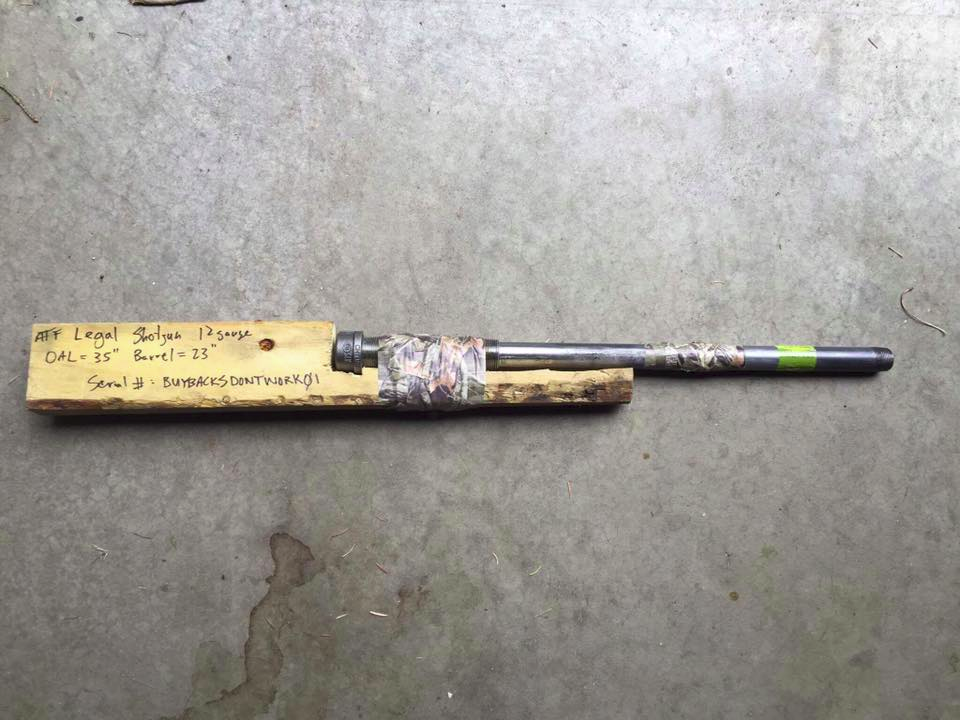 Last weekend the city of Minneapolis unleashed the greatest plan ever devised by leftists, to stunt the plague of gun violence that is ravaging their city. They of course, did what any unimaginative gun grabber would do.

They decided to hold a gun buyback program at a local fire station. This however wasn’t an ordinary gun buyback. In this case, the weapons that would be bought from the residents of Minneapolis, would be donated to local artists, so that they could use the guns to make a statement about the devastating impact of gun violence.

In a sense, the program was a success. Though it was scheduled to run until 6pm on Saturday, within a couple of hours the program ran out of money. They had purchased 150 guns and issued $25,000 dollars in Visa gift certificates.

However, one of those purchases wasn’t much of a gun at all. The Minnesota Gun Owners Caucus posted a picture of this piece (also pictured above) on their Facebook page, which is quickly going viral.

Minneapolis police purchased this “shotgun” for $100, which was really just a block of wood and a lead pipe taped together. It was possibly a slam fire shotgun, but it’s not clear if it even works. The object turned out to be a political statement created by an anonymous person, who had built the weapon to prove a point. Scrawled on the side of the gun in black sharpie, was a fake serial number that read “BuyBacksDontWork01.”

Which was clearly the case with this gun buyback program. When questioned by the media, many of the people waiting in line to give up their firearms admitted that the guns had simply been collecting dust in their homes, and they didn’t know what else to do with them. Obviously, real criminals don’t give up their weapons so easily. Another person admitted that he was going to use the $200 he received to buy a new gun. He expressed his doubts about the program to CBS news. “I just don’t feel that a criminal is going to come up to a fire department with a bunch of police around it and turn in a gun.”

And as is often the case with gun buyback programs, private gun buyers flocked to the event to buy these weapons before they were given to the police. One gun collector bought a shotgun and a rifle for $175, and implied that most of the weapons sold there were junk. “A lot of what I’m seeing is gun nuts turning in their guns for more than they’re worth.”

In reality, this gun buyback program wasn’t a success. None of them are. Most of the guns that show up are broken or makeshift disasters that are clearly worth less than a hundred dollars, which isn’t a surprise. After all, most people won’t give up a perfectly good firearm for a few bucks, even if they hate guns. These programs generally don’t remove real functional weapons from the streets, and no criminal is going to give up his firearm in that setting. It’s a colossal waste of money, both for whoever is funding the event, and for any poor sap who is dumb enough to hand over a working firearm.

In any case, at least one of the participants in this program wasn’t dumb. Hopefully his psuedo shotgun/clever commentary will find its way into the mediocre modern art work of some anti-gun crusader.