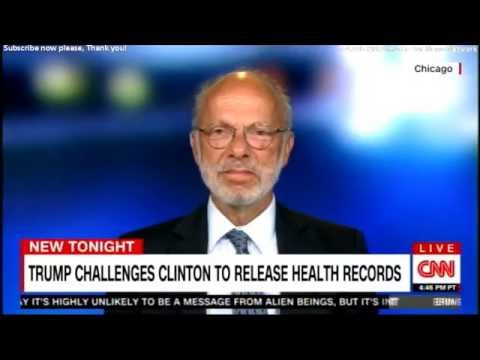 According to Dr. David Scheiner, who was President Obama’s personal physician from 1987 to 2008, Hillary Clinton should undergo a neurological examination to prove that she is fit for office.

The majority of the CNN interview with Scheiner, who personally assessed Obama to be in “excellent health” before he entered the White House, dwelled on Donald Trump’s health, but the discussion of Hillary’s medical condition threw up the most interesting comments.

Asked if a note from Hillary’s personal physician saying she was in good health and had recovered from her 2012 concussion was good enough, Scheiner disagreed.

“She’s also 68 years old. While I think that medical letter was well written…it’s not enough,” he said.

Scheiner highlighted the fact that Hillary is taking Coumadin, a medication to prevent blood clots, remarking, “You have to monitor that, I’d like to know how well she is being controlled – that’s a difficult drug to use.”

However, the media has almost completely ignored these prominent voices, instead continuing to insist that anyone who talks about the issue is a “conspiracy theorist,” despite the fact that the press obsessed about John McCain’s health back in 2008.

In a related development, Hillary Clinton’s VP Tim Kaine said Tuesday that voters deserve to know if candidates are “in good enough health to perform their duties.”