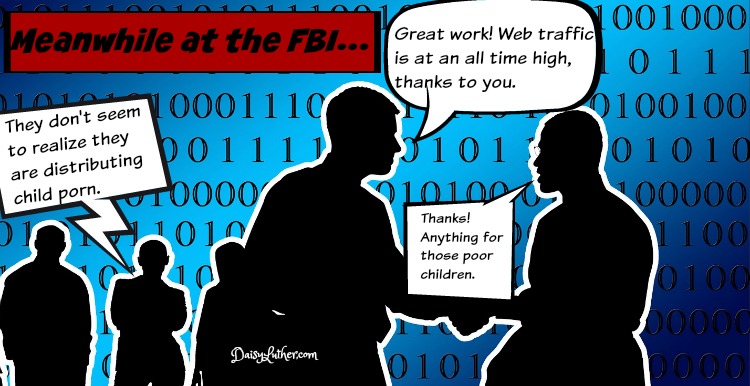 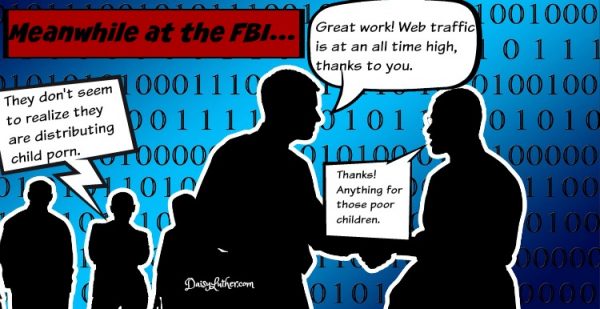 The government is notorious for wasting taxpayer money and for spending it on war, corporate welfare, bank bailouts, and all manner of awful things. (You can experience the same sticker shock I did in this book.)

But nothing says “your tax dollars at work” like government-distributed child pornography.

I couldn’t make this up. Here’s what happened.

In February 2015, the FBI took over a child pornography site called The Playpen.

At the time, it was the largest known site of its kind.

After arresting the North Carolina administrator of the site, a “dark web”child-pornography internet bulletin board, agents seized the site’s server and moved it to an FBI warehouse in Virginia.

You’d think that the FBI, upon taking over the site, would immediately shut it down.

Not only did the FBI keep the site running, it IMPROVED it’s functioning.

That’s right: while attempting to bust users of a child pornography website, the FBI actually INCREASED the number of visitors to the site, pimping out the photos of even more victimized children than the original criminals.  And by more, I mean a LOT more.

“The FBI distributed child pornography to viewers and downloaders worldwide for nearly two weeks, until at least March 4, 2015, even working to improve the performance of the website beyond its original capability,” Peter Adolf, an assistant federal defender in the Western District of North Carolina, writes in a motion to have his client’s indictment thrown out.

“As a result, the number of visitors to Playpen while it was under Government control [increased] from an average of 11,000 weekly visitors to approximately 50,000 per week. During those two weeks, the website’s membership grew by over 30%, the number of unique weekly visitors to the site more than quadrupled, and approximately 200 videos, 9,000 images, and 13,000 links to child pornography were posted on the site,” he continues.

It gets even more disturbing:

Adolf’s motion continues, “Indeed, government agents worked hard to upgrade the website’s capability to distribute large amounts of child pornography quickly and efficiently, resulting in more users receiving more child pornography faster than they ever did when the website was running ‘illegally.’”

So, in the process of supposedly attempting to catch child pornography viewers in the act, the FBI actually made accessing, viewing, and distributing the content easier and more widespread.

But, who is the bigger criminal here – visitors to the website or the FBI?

Some legal experts are saying that during its computer hacking sting – creepily named “Operation Pacifier” – the FBI committed more serious crimes than the perps they busted.

Defense attorneys and some legal scholars suggest that he FBI committed more serious crimes than those they’ve arrested—distributing pornography compared to viewing or receiving it.

Moreover, the FBI’s refusal to discuss Operation Pacifier and reveal exactly how it was conducted — even in court —has threatened some of the resulting criminal prosecutions. Last month, a federal judge in Tacoma, Wash., suppressed the evidence obtained against a Vancouver, Wash., school district employee indicted in July 2015 on a charge of receiving child pornography because the FBI refused to reveal how it was gathered.

Why is distributing child pornography said to be worse than viewing or receiving it?

Well, according to the government, children are revictimized every time images of their sexual abuse are viewed or transferred.

That argument is one of the main rationales for punishing mere possession of child pornography, which under federal law and the laws of some states can be treated more harshly than violent crimes—more harshly even than actual abuse of children. That penalty structure is obviously irrational unless you believe that serious harm is inflicted every time someone looks at the image of a child’s sexual abuse. In that case, a large enough collection of images could equal or even surpass the harm done by a single child rape, so that it could make sense to impose a life sentence on someone who has done nothing but look at pictures.

Yeah, I don’t buy that either. But federal prosecutors supposedly do, and here they are bringing cases that, by their own lights, required the FBI to victimize children thousands of times. Each time the FBI “distributed” an image, it committed a federal crime that is punishable by a mandatory minimum sentence of five years and a maximum sentence of 20 years. So did the person who “received” the image, which in the Internet context is the same as looking at it. If such actions merit criminal punishment because they are inherently harmful, there is no logical reason why the agents who ran The Playpen should escape the penalties they want to impose on the people who visited the site.

In court documents from other related cases filed last Monday, defense attorneys placed a “conservative estimate” on the number of illegal images distributed by the FBI during its operation of Playpen at 1,000,000.

So far, 186 people have been criminally charged as a result of the operation, mostly for receiving or possessing child pornography. Many of those cases are being challenged and some have been thrown out based on the FBI’s questionable practices during the sting.

While they said that they did eventually shut it down, it wasn’t until they victimized more children at our expense.

And your tax dollars paid for the operation.  Have a nice day.