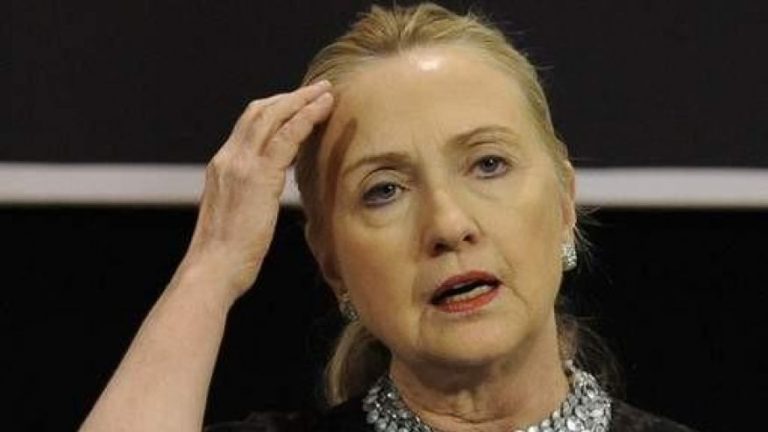 “This is crazy. 3 weeks after the NY Times published Clinton email server story, there was a big wipe of her emails conducted.” (Chris Cilliza)

The FBI report also provided detail on mass deletions of Clinton’s email server by the company maintaining her server, Platte River Networks, after the existence of it came to light.
According to the investigation report, top Clinton adviser Cheryl Mills told a PRN worker whose name was redacted in December 2014 that Clinton wanted her email to only be retained for 60 days, and instructed him to reset the retention policy on her email account.
take our poll - story continues below
Completing this poll grants you access to DC Clothesline updates free of charge. You may opt out at anytime. You also agree to this site's Privacy Policy and Terms of Use.
But the individual told the FBI he realized that he had failed to do so until after The New York Times published its bombshell story revealing Clinton’s private server and email use, prompting an “‘oh s***’ moment.”
“In a follow-up FBI interview on May 3, 2016, (name redacted) indicated he believed he had an ‘oh s***’ moment and sometime between March 25-31, 2015, deleted the Clinton archive mailbox from the PRN server and used BleachBit to delete the exported .PST files he had created on the server system containing Clinton’s emails,” the report stated.
The mass deletion occurred after the March 2, 2015, Times story and after a March 3, 2015, preservation order from the House Benghazi Committee to retain and produce documents related to her email accounts. (CNN)

Hillary Clinton is a bloody liar. Her health is the least of it.  She is owned by our worst enemies and Huma’s power is dangerous.

Clinton says could not recall all briefings due to concussion: FBI report

Hillary Clinton told federal investigators she did not recall all the briefings she received on handling government records while U.S. secretary of state because of a concussion suffered in 2012, according to a summary of the probe released on Friday.

The Federal Bureau of Investigation released an 11-page account of the three-and-a-half-hour interview it conducted with the Democratic presidential candidate on July 2, as well as other details of its investigation into her use of an unauthorized private email system while running the State Department.

Clinton, who is challenging Republican Donald Trump for the White House in the Nov. 8 election, has been dogged by the fallout from her private email account for more than a year.

Republicans have repeatedly attacked Clinton over the issue, helping drive opinion polls that show many U.S. voters doubt her trustworthiness. Trump has repeatedly used the issue as part of his claims that Clinton is dishonest, and his campaign on Friday said the notes from the FBI report reinforced “her tremendously bad judgment and dishonesty.”

Clinton has said that in hindsight she regretted using a private email system while secretary of state. The FBI’s investigation found that she mishandled classified government secrets, but it did not think a criminal prosecution was appropriate.

Clinton told investigators she could not recall getting any briefings on how to handle classified information or comply with laws governing the preservation of federal records, the summary of her interview shows.

“However, in December of 2012, Clinton suffered a concussion and then around the New Year had a blood clot,” the FBI’s summary said. “Based on her doctor’s advice, she could only work at State for a few hours a day and could not recall every briefing she received.”

The concussion was widely reported at the time, and Republicans have since used it to attack the 68-year-old candidate’s health in a way her staff have said is unfounded.

According to the report, Clinton told the FBI that she did not set up a private email server to sidestep the law requiring her to keep her business communications a matter of public record. At least one federal judge is examining whether this was the case as part of a lawsuit against the State Department concerning public access to Clinton’s government records.

The documents also show that Clinton contacted former Secretary of State Colin Powell in 2009 to ask about his use of a personal BlackBerry phone.

In his reply to Clinton via email, Powell told Clinton to “be very careful” because the work-related emails she sent on her BlackBerry could become public record.

“I got around it all by not saying much and not using systems that captured the data,” Powell said, according to the summary.

After her use of a private email system became public knowledge in March 2015, Clinton repeatedly said she did not use it to send or receive classified information. The government forbids handling such information outside secure channels.

The FBI has since concluded Clinton was wrong to say that: At least 81 email threads contained information that was classified at the time, although the final number may be more than 2,000, the report says. Some of the emails appear to include discussion of planned future attacks by unmanned U.S. military drones, the FBI report shows.

The FBI released its report on Friday afternoon before the Labor Day holiday weekend, a time many Americans are preparing to travel.

State Department spokesman John Kirby said he would not comment on the FBI’s findings because the department “does not have full insight into the FBI’s investigation.”

“Furthermore, it is not appropriate to consider pieces of evidence outside of the broader context,” he said in a statement. “So the State Department is not going parse every individual piece of evidence that may be characterized through the media.”

Spokesmen for Clinton did not respond to questions about the concussion and other aspects of the FBI’s summary, but released a statement welcoming the summary’s release.

“While her use of a single email account was clearly a mistake and she has taken responsibility for it, these materials make clear why the Justice Department believed there was no basis to move forward with this case,” Brian Fallon, a campaign spokesman, said in his statement.

Some Republicans saw the files as confirming their belief that the Department of Justice should have prosecuted Clinton.

“These documents demonstrate Hillary Clinton’s reckless and downright dangerous handling of classified information during her tenure as secretary of state,” Paul Ryan, the Republican speaker of the U.S. House of Representatives, said in a statement. “This is exactly why I have called for her to be denied access to classified information.”