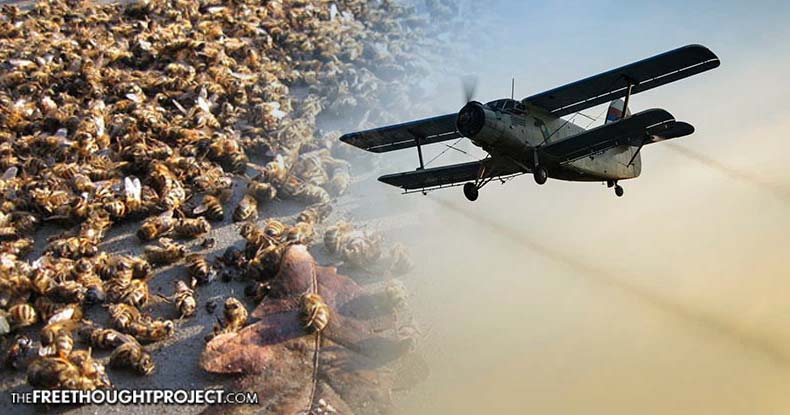 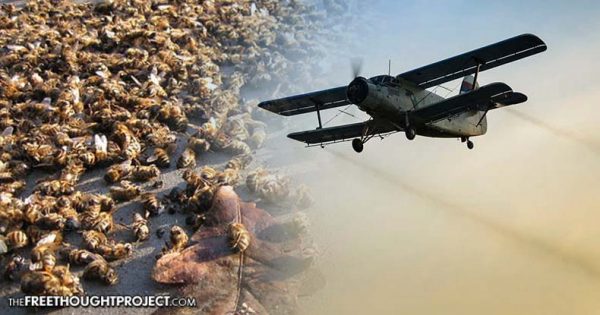 Summerville, SC – Mosquito eradication efforts in South Carolina have gone horribly wrong, resulting in almost total devastation to the indigenous bee populations. The pesticide used to target the Aedes albopictus and Aedes aegypti species of mosquito, which can carry and transmit the Zika virus, killed off millions of bees.

On Sunday morning, Dorchester County engaged in aerial spraying of an insecticide called naled, an insecticide that is banned in numerous countries, but legal for use in the U.S. since 1959. The county had used the insecticide previously but had only sprayed using trucks in the mosquito control program.

The near hysteria regarding the Zika virus, as there are several dozen cases of travel-related Zika in South Carolina, prompted Dorchester officials to make an ill-advised move to begin aerial spraying – even though the state health department reports no one has yet acquired the disease from a local mosquito bite.

The effects from the aerial spraying were disastrous.

Juanita Stanley, co-owner of Flowertown Bee Farm and Supply in Summerville described the aftermath of the spraying as being nothing less than total devastation after reporting the loss of 46 hives and over 2.5 million bees.

“My bee yard looks like it’s been nuked,” Stanley told the Associated Press.

The county says it provided plenty of warning, spreading word about the pesticide plane via a newspaper announcement Friday and a Facebook post Saturday. However, Stanley disagreed with the contention that fair warning was given.

“Had I known, I would have been camping on the steps doing whatever I had to do screaming, ‘No you can’t do this,’” Stanley said in an interview with Charleston’s WCSC-TV.

In response to the millions of bee deaths, county officials issued a statement Tuesday saying they were “aware that some beekeepers in the area that was sprayed on Sunday lost their beehives.”

Although naled kills mosquitos, and people are afraid of Zika related encephalitis, which has been attributed to the insects, the known effects of naled may actually be exponentially worse than anything Zika can muster for a broad cross-section of the population.

Like all organophosphate insecticides, NALED (DIBROM) is primarily for mosquito control. Roughly one million pounds are used annually in the U.S. Like all organophosphates, naled is toxic to the nervous system. Symptoms of exposure include headaches, nausea, and diarrhea. Naled is more toxic when exposure occurs by breathing contaminated air than through other kinds of exposure. In laboratory tests, naled exposure caused increased aggressiveness and a deterioration of memory and learning.

Naled eventually breaks down after spraying into dichlorvos (another organophosphate insecticide), which has been shown to interfere with prenatal brain development. In laboratory animals, exposure for just 3 days during pregnancy when the brain is growing quickly reduced brain size 15 percent.

Dichlorvos also causes cancer, according to the International Agency for Research on Carcinogens. In laboratory tests, it caused leukemia and pancreatic cancer. Two independent studies have shown that children exposed to household “no-pest” strips containing dichlorvos have a higher incidence of brain cancer than unexposed children.

Aerial applications of naled can drift up to one-half mile. According to the U.S. Environmental Protection Agency, naled is moderately to highly toxic to birds and fish. It also reduced egg production and hatching success in tests with birds and reduced growth in tests with juvenile fish.

Exposure to naled has multiple effects on behavior. In a study conducted by naled’s manufacturer, naled caused reduced muscle strength, slow responses to stimulation, and reduced activity in rats. These behavioral changes occurred at all but the lowest dose level tested in males and all dose levels tested in females, suggesting that females are more sensitive than males to naled poisoning.

South Carolina had a total of 43 confirmed Zika cases as of Aug. 26, none of which were contracted from local mosquito bites. The fact that such a highly toxic substance is being sprayed down upon people and insects alike is shocking given the facts relating to Zika in South Carolina.

It seems clear that the problems inherent to naled are potentially worse than Zika itself. Given the fact that so few people are infected with Zika – none by local mosquitos – in combination with the known devastating effects of naled, it seems like the solution is a bigger danger than the initial problem.

Is it any surprise that this dangerous insecticide is completely banned in Europe?

What is taking place is nothing less than ecological genocide, as all the beneficial native species are killed off in addition to the targeted mosquitos. To ineffectively combat a virus that will minimally affect people, by risking the health of our bees, as well as a large number of people, seems like an extremely dangerous proposition — and overall bad idea.

The county has since opened a call center to receive information on losses connected to the spraying.