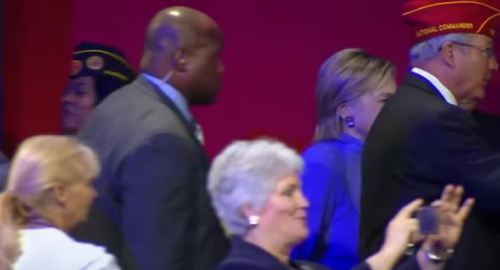 I find Hillary Clinton’s chameleon-like changing appearance fascinating, like gazing at a snake.

There’s an episode of the old Star Trek TV series, “Mudd’s Women,” in which women would instantly transform themselves from old hags to beautiful sirens by ingesting the Venus pill. Hillary’s visage also goes through interesting changes.

Below is a side-by-side comparison of Hillary at the Benghazi hearing on January 23, 2013 (left) and Hillary miraculously rejuvenated 3½ years later (right), looking like a decades-younger porcelain doll when she accepted her party’s nomination on July 28, 2016, the last day of the Democratic National Convention (DNC).

The occasion was the American Legion Convention in Cincinnati, Ohio. Here’s a screenshot of Hillary during her speech, looking like death warmed over. The live video of her speech follows.

There is something unnatural and unsettling about the drastic changes in her appearance, and by that I don’t mean just cosmetics . . . .

The American Legion speech is notable for another reason — the reappearance of Hillary’s medical handler at the end of the video.

Medical Handler is the burly black man by the side of Hillary on her big night at the DNC, carrying what appears to be a Diazepam auto-injector pen (for seizures) in his left hand.

A week later, on August 4, 2016, when Hillary got flustered during a speech at a campaign rally, Mr. Medical Handler immediately went to her side, reassured her by touching her with his hand — something that a Secret Service agent would never do — and whispered to her, “Keep talking”.

Hillary’s medical handler should not be confused with her black Secret Service agent. Although both are black, bald and tall, the medical handler has a shorter, thicker neck and is fatter than the SS agent, as shown in this video snip from Hillary’s big night at the DNC:

Below is a screenshot I took at the 0:13 mark of the above video, showing the physical differences between the two men.

Here are two screen shots I took from the video of Hillary’s speech at the American Legion convention on August 31, 2016, showing that thick-neck Medical Handler is back.

By the way, were you as nauseated as I was by the fawning audience at the American Legion convention? Don’t these military veterans know Hillary abandoned four Americans, including two former Navy SEALS, to die in Benghazi?

Here’s a screenshot of some of the audience going gaga over Hillary — a woman who, if it were not for corrupt FBI Director James Comey, would be arrested, tried, and imprisoned for violating U.S. laws (Title 18, Sec. 2071) by having an unsecured private email server while she was secretary of state.

Which just goes to show that our enemies are Americans who, despite everything that’s been revealed about her, still think Hillary’s just ginger peachy and will vote for her on November 8.