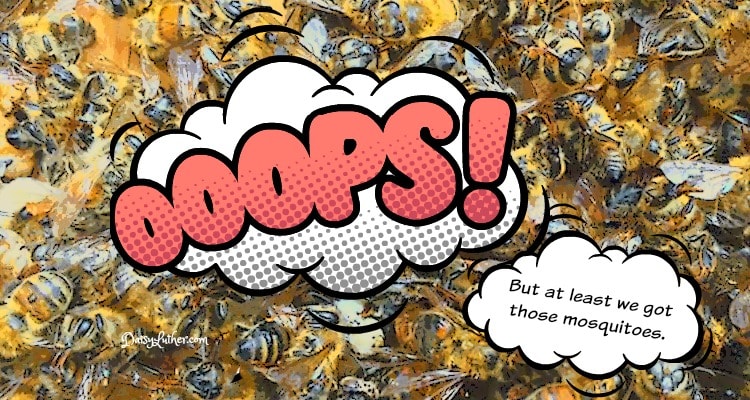 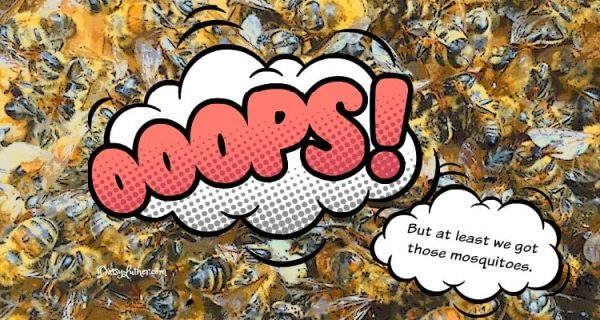 None of it matters.

What matters now is what the authorities are doing about it.

In a classic case of the cure being worse than the illness, it’s the “solution” to Zika that has the potential to devastate the American food supply.

Content with saying this deadly poison quickly dissipates and therefore should not cause problems in humans the powers that be in Dorchester County, South Carolina decided to spray this stuff in the morning, rather than at night. During the night most people and most bees are less active and less likely to be out of doors (or hives) and are therefore less likely to come into contact with this deadly poison.

Due to this horrible decision, in the space of just a few minutes,  2.5 million bees died in just one apiary.

The pattern of their death and the way they clumped around the entrances of the hives signalled one thing and one thing only to the experienced beekeepers who owned them – acute pesticide poisoning.

Shortly before, a plane spraying Naled had flown over, spraying the chemical to kill mosquitoes that *may* be carrying the Zika virus.

Updated to add:  This article is an extremely thorough coverage about the spraying itself. Apparently, the community was only given about 3 hours notice, with no option to protest the decision to poison an entire town. You’ve got to read this, because it’s probably prophetic. Coming soon to a town near you.

Naled kills mosquitoes on contact. It has been in use in the United states since 1959, and according to the EPA it dissipates fast, causing no problems to humans (debatable, see here) …but that’s clearly not the case with bees.

You can see the full Cornell University Toxicity Network database entry for Naled here. It states quite clearly that Naled is highly toxic to bees.

The plane sent out a fine mist of Naled between 0630 and 0830 on Sunday morning and the county says it gave plenty of warning of the spraying via a newspaper and Facebook announcements. Obviously, it was not enough.

Jason Ward, the county administrator, said in a news release:

Jason Ward contacted The Washington Post by email and said the following:

“The beekeepers that were on the county’s contact list that were in the zone to be sprayed were called with one exception. Mr. Scott Gaskins, who runs the Mosquito Control program, failed to call Mitch Yawn, Ms. Juanita Stanley’s business partner,” Ward said in the email.

“The second issue regarding beekeepers like Mr. Andrew Macke revolves around the fact that the county did not have these locations on its list. However, we have reached out to the Lowcountry Beekeepers Association and they provided us with the names and locations for other beekeepers in Dorchester County.”

The death of bees could have long-ranging effects on our food supply.

Basic science tells us that bees and our food have a synergistic relationship.  Their job is pollination. Without bees doing their jobs, we’re screwed.

Even if you hate bees, you need them. They are responsible for much of the food on your plate. Bees perform a task that is vital to the survival of agriculture: pollination. In fact, one third of our global food supply is pollinated by bees.

Without bees, these crops would cease to exist. Bees are crucial to our existence as well, thus we must work harder to protect and preserve them. (source)

Crops would literally cease to exist. If you think food prices at the store now are high, just wait.

But, so great is the media-driven Zikasteria that people are begging for a dramatic response.  So, millions of acres around the country are getting sprayed with Naled, the pesticide they used in South Carolina.

Here’s what Cornell University Toxicology Network had to say about Naled:

The organophosphate insecticides are cholinesterase inhibitors. They are highly toxic by all routes of exposure. When inhaled, the first effects are usually respiratory and may include bloody or runny nose, coughing, chest discomfort, difficult or short breath, and wheezing due to constriction or excess fluid in the bronchial tubes. Skin contact with organophosphates may cause localized sweating and involuntary muscle contractions. Eye contact will cause pain, bleeding, tears, pupil constriction, and blurred vision. Following exposure by any route, other systemic effects may begin within a few minutes or be delayed for up to 12 hours. These may include pallor, nausea, vomiting, diarrhea, abdominal cramps, headache, dizziness, eye pain, blurred vision, constriction or dilation of the eye pupils, tears, salivation, sweating, and confusion. Severe poisoning will affect the central nervous system, producing incoordination, slurred speech, loss of reflexes, weakness, fatigue, involuntary muscle contractions, twitching, tremors of the tongue or eyelids, and eventually paralysis of the body extremities and the respiratory muscles. In severe cases there may also be involuntary defecation or urination, psychosis, irregular heart beats, unconsciousness, convulsions, and coma. Death may be caused by respiratory failure or cardiac arrest

It’s interesting to note that Puerto Rico’s governor refused to authorise the use of Naled due to environmental concerns, despite the fact that Puerto Rico has been home to widespread infection with Zika. This is a horrible solution to what may be a non-problem. There is still no solid evidence that Zika causes microcephaly.

Colony Collapse Disorder has wiped out millions upon millions of bees in recent years and this isn’t the first time that it has been linked to a pesticide. I can’t believe I’m actually quoting them, but the EPA explains how bees are killed by irresponsible use of pesticide spraying.

Certain pesticides are harmful to bees. That’s why we require instructions for protecting bees on the labels of pesticides that are known to be particularly harmful to bees. This is one of many reasons why everyone must read and follow pesticide label instructions. When most or all of the bees in a hive are killed by overexposure to a pesticide, we call that a beekill incident resulting from acute pesticide poisoning. But acute pesticide poisoning of a hive is very different from CCD and is almost always avoidable.

There have been several incidents of acute poisoning of honey bees covered in the popular media in recent years, but sometimes these incidents are mistakenly associated with CCD. A common element of acute pesticide poisoning of bees is, literally, a pile of dead bees outside the hive entrance. With CCD, there are very few if any dead bees near the hive. Piles of dead bees are an indication that the incident is not colony collapse disorder. Indeed, heavily diseased colonies can also exhibit large numbers of dead bees near the hive.

This is way worse than just some unwanted pesticide being sprayed.

While I would strongly object to pesticide being sprayed willy-nilly in my neighborhood in any circumstance, this particular situation is far worse than that. This is literally something that could affect our ability to feed our families.

WITHOUT BEES WE ALL STARVE. It really is that simple.

Here’s even more information on this event that never should have happened to prevent a disease that shouldn’t be so fear-inducing.