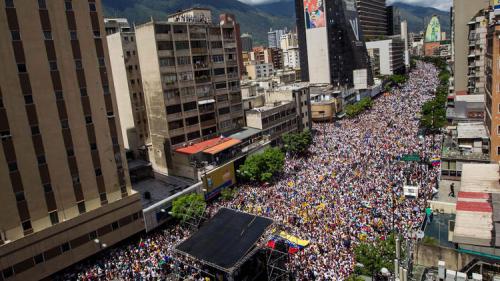 After months of hyperinflation, and food, water, and medical shortages, the people of Venezuela finally took to the streets to tell their socialist government they’ve had enough.

On Thursday, Sept. 1, 2016, an epic surge of half a million people converged on the capital, Caracas, to insist that an election to recall President Nicolas Maduro, the 53-year-old successor to the late Hugo Chavez, take place as planned.

Mery Mogollon and Chris Kraul report for the Los Angeles Times that the legions of anti-Maduro protesters, mostly dressed in white, stretched for as far as the eye could see. Estimates put the crowds at 500,000.

The marchers carried posters reading “No more socialism,” “Maduro Out,” “Venezuela wants a recall,” and banners demanding the release of political prisoners. They said life in Venezuela has become a daily ordeal of standing in endless lines for food, for government services, for medical care. A common sentiment of the demonstrations was frustration — frustration over having water or electricity service cut off, frustration for hyperinflation that destroys the value of their wages. The Venezuelan flag was everywhere — on hats, shirts, skirts, rendered in face paint. Many wore flags as capes. The protesters came from all over Venezuela, including indigenous community representatives from Amazonas state. Some marched bare-chested and in loincloths while carrying spears.

Bordering the streets occupied by the masses of protesters were several cordons of riot police. They used tear gas to disperse some protesters who mounted one of Caracas’ freeways, but otherwise there were no violent incidents or confrontations reported.

Among the demonstrators were:

The demonstration was a forceful repudiation of the leftist politics that are falling out of favor across Latin America. At its peak in 2008, the left held the presidencies of 8 of the 10 most populous countries in South and Central America. But those regimes have lost popularity as steep drops in commodity prices badly damaged their economies and left less money to spend on the poor. Candidates from the right recently won the presidencies of Argentina and Peru, and just this week, Dilma Rousseff was permanently ousted from the presidency in Brazil in an impeachment trial engineered by opponents from the right who now control the government.

But nowhere in Latin America has the rise and fall of the left been as dramatic as in Venezuela, a country that has been on the brink of collapse for the last several months.

Venezuela had its own brand of socialism, known as Chauvismo for Hugo Chavez — actor Sean Penn’s best bud, who was elected president in 1998 in a rejection of free-market policies that were encouraged by the United States but failed to deliver on their promise of wider prosperity. Chavez fueled his social programs with revenue from the country’s vast oil supply. But falling oil prices and out-of-control spending threw the economy into turmoil as the leadership turned to more repressive measures to stifle growing discontent.

Maduro, who was vice president under Chavez, took over after the latter died in March 2013 and was narrowly elected to a six-year term the next month. Maduro’s support plummeted as the economy continued to deteriorate to the point that analysts warn that Venezuela is at risk of becoming a failed state.

The opposition had thought winning a majority of seats in the National Assembly in last year’s elections would lead to changes. But the Maduro-controlled Supreme Court has declared 24 laws passed by the body to be illegal.

Still, Maduro has supporters who held a counter-march of tens of thousands on Thursday in a section of Caracas closer to the Miraflores presidential palace. The anti-Maduro forces say the pro-government marchers were paid to be there.

On Sept. 14, protests will be convened at all the state capitals to demand that the national electoral council convene the “recall Maduro” vote. While the council has verified that enough signatures were collected earlier this year to initiate the process, it has not set a firm time line for the next phase, which opponents claim is a delaying tactic.

Meanwhile, still no sign of Sean Penn in Venezuela.

Penn has lived a privileged life since birth as the son of actor-director Leo Penn. His paternal grandparents were Ashkenazi Jewish emigrants from Lithuania and Russia.