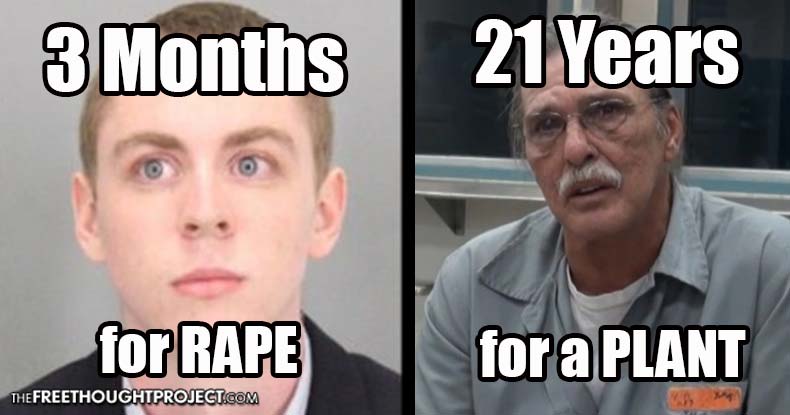 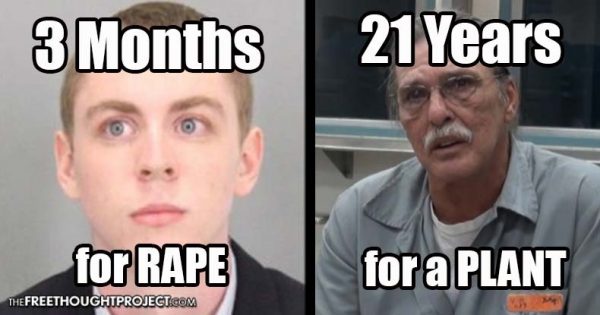 Our so-called justice system makes a mockery of due process, couldn’t care less about integrity, and victimizes those guilty of nonviolent crime — while releasing violent criminals to create actual victims in order to free up space to cage those who sell or possess a plant, even for medical reasons.

In perhaps the most striking example of justice upended, convicted rapist Brock Turner — who claimed of his victim in a police interview, “She seemed to enjoy it” — now walks free after serving just three of an abhorrently paltry six-month sentence for the violent crime.

Meanwhile, accounts like that of Jeff Mizanskey, who had been slated to die in jail after three exceedingly minor cannabis-related offenses earned him a life sentence, top the headlines with alarming frequency.

Although outrage over Mizanskey’s court-induced punishment ultimately earned a commutation by Missouri Governor Jay Nixon, 21 years of his life spent behind bars cannot be justified — no matter what erroneous propaganda the government shoves down our throats.

Mizanskey automatically earned the life sentence as dictated by Missouri’s three strikes law — the controversial penalty system whereby anyone convicted of a third felony reflexively earns an arbitrarily harsh sentence, generally a life term, depending on the state. His three offenses, according to Reason, “included selling a small amount of pot to a relative, possessing less than three ounces in his home, and driving a friend to a hotel to buy pot from an undercover officer.”

Hardly the stuff of a career criminal hell-bent on violently victimizing the public.

Three strikes laws have been ruled constitutional despite the seeming obvious contradiction to the Eighth Amendement’s protection against cruel and unusual punishment. Worse, the laws are discretionarily applied, so, in cases of what are known as ‘wobbler laws’ — which are considered either a misdemeanor or felony, depending on both the circumstances and the ruling judge — courts can decide whether someone goes to prison for a few months or the rest of their lives.

Some states have reformed such laws to mandate only violent offenses trigger the third strike rule, but not-at-all surprisingly, minorities tend to receive the harshest sentences — a discriminatory practice which has only worsened over time.

Discretion and discrimination aren’t limited purely to instances where three strikes laws kick in, and the cases of Brock Turner and Austin Wilkerson — who like Turner, sexually assaulted an incapacitated woman — aptly illustrate the seemingly limitless affront to justice.

Harsh prison sentences, by design, putatively punish the most dangerous criminals — and who poses more of a threat to society than a violent criminal ignorantly unaware their actions constitute a crime?

Two good samaritans happened upon Turner in the act of sexual assault in January 2015, and chased and held him down until authorities could arrive on scene; but despite the obvious crime of rape of an unconscious victim, Turner told police, according to court documents cited by KPIX-TV,

“I thought it was really weird the guy thought I was raping the girl.”

Worse, he clearly did not grasp the gravity of his violent crime, as he stated, “My intentions were not to rape a girl. I was just trying to hook up with a girl,” and further, “She seemed to enjoy it.”

Turner even appeared to contradict himself: When asked by an officer, “At what point did she stop responding?” he replied, “Well, we didn’t kiss the entire time.”

Santa Clara District Attorney Jeff Rosen told the Washington Post in June, “To this day, the defendant denies what he did.”

If judges are to be trusted with discretion in sentencing, Judge Aaron Persky didn’t lend any integrity to the cause — Turner faced up to 14 years in prison, prosecutors asked for six — but, stating that a harsher penalty would “have a severe impact on him,” the judge handed down a mere six months.

Contrast that to Mizanskey’s 21 years behind bars and the arbitrariness of the American Injustice System is on full display. In fact, Turner’s sentence has revived a troubling call to bring back mandatory minimums — another method of oppression similar to three strikes laws that continually punish people based almost solely on the crime committed, regardless of extenuating circumstances.

Perhaps the debate shouldn’t concern prison sentencing law at all. Perhaps it should instead spark a national discussion about the growing call to abolish the prison system altogether — and the case is surprisingly solid given potential alternatives.

First, consider the actuality prisons in no way rehabilitate inmates, but, instead, act as training facilities in which prisoners teach each other how better to perpetrate crimes. Pascal-Emmanuel Gobry potently summarized for The Week:

“Prison is an incredibly stupid way to fight crime because, as is well known, it is the enemy of rehabilitation. In prison, criminal gangs flourish. This means prison becomes a graduate school for crime, a facility for turning mediocre criminals into hardened ones. More generally, who thinks locking up people in places where they are fed and housed and boxed up and surrounded only by other dysfunctional people is going to turn them into productive members of society? The idea would be laughable if it wasn’t part of the status quo. Prison, by its very design, breeds crime and social dysfunction […]

“Prisons are also contrary to the values of liberty that any civilized society ought to aspire to. As the French writer Michel Foucault argued in his landmark essay Discipline and Punish, prison is a historical oddity that arose as a result of the modern state’s increasing ability and eagerness to control more and more of its citizens’ lives.”

These facts might seem patently obvious to anyone who’s ever been or known someone who’s been incarcerated for any length of time. Captivity, itself a violent act, perpetuates further resentment-fueled violent acts. As Associate Professor Allegra M. McLeod wrote for Georgetown University Law Center,

“Prisons and punitive policing produce tremendous brutality, violence, racial stratification, ideological rigidity, despair, and waste. Meanwhile, incarceration and prison-backed policing neither redress nor repair the very sorts of harms they are supposed to address — interpersonal violence, addiction, mental illness, and sexual abuse, among others. Yet, despite persistent and increasing recognition of the deep problems that attend U.S. incarceration and prison-backed policing, criminal law scholarship has largely failed to consider how the goals of criminal law — principally deterrence, incapacitation, rehabilitation, and retributive justice — might be pursued by means entirely apart from criminal law enforcement.”

McLeod points out that over four decades ago, in 1973, a commission appointed by the Department of Justice to study the “American Correctional System” found U.S. prisons, jails, and youth detention facilities displayed a “shocking record of failure” — for which the commission recommended a 10-year moratorium on new prison construction.

No one is suggesting prisons and jails open their doors immediately without regard to public safety; but a graduated program reducing prison populations by re-housing inmates in appropriate facilities could lead to the eventual abolishment of this utterly failed system. McLeod continues:

“These institutional alternatives include meaningful justice reinvestment to strengthen the social arm of the state and improve human welfare; decriminalizing less serious infractions; improved designs of spaces and products to reduce opportunities for offending; urban redevelopment and ‘greening’ projects; proliferating restorative forms of redress; and creating both safe harbors for individuals at risk of or fleeing violence and alternative livelihoods for persons otherwise subject to criminal law enforcement […]

“A prison abolitionist framework entails, more specifically, developing and implementing other positive substitutive social projects, institutions, and conceptions of regulating our collective social lives and redressing shared problems — interventions that might over the longer term render imprisonment and criminal law enforcement peripheral to ensuring relative peace and security. Efforts of prison abolitionist organizations, such as Critical Resistance and the Prison Moratorium Project, to both oppose imprisonment and enable access to food, shelter, community-based mediation, public safety, and well-being without penal intervention exemplify this orientation towards positive abolition.”

Considering the large proportions of nonviolent drug offenders currently housed in U.S. prisons, reform of drug laws, alone, would go far in reducing incarceration. In fact, the state and federal prison population exploded by 800 percent in the forty-plus years since the war on drugs began — a war implemented for the purposes of criminalizing black people and hippies, as Nixon’s chief advisor later disclosed.

Indeed the fantastically failed drug war not only padded prisons with those who chose to use or sell substances the State arbitrarily deemed illegal, but it further stratified racial and economic disparity and birthed the brutal police state — a separate case for the abolition of police stands on similarly solid ground.

The most ardent resistance to reform, much less abolition, comes primarily from those who stand to lose the most from significant change.

Overcriminalization has spawned private prisons and policing for profit to the detriment of peaceful society — and fear-touting propaganda keeps the populace from accepting a lack of prisons could do more good than harm. As a growing number of purposefully harmless behaviors are criminalized, we have been placed in the ridiculous position where the average person unknowingly commits three felonies — every, single day.

Yet Congress continues criminalizing such things as collecting rainwater, living off-grid, keeping rabbits and chickens in one’s own backyard, and growing vegetables in the front yard because illegality feeds the wallets that legitimize the existence of Big Government — without thousands of surplus laws, there would be no need for myriad prisons, violent policing, countless backlogged courts, and, of course, money-hungry politicians.

Returning to the cases of Brock Turner and Jeff Mizanskey, the profit motive becomes clear: Turner hails from a wealthy, white family of extreme privilege — details the judge blatantly capitulated to in his shockingly inadequate sentencing decision. Indeed, Turner’s father displayed the same disregard for the victim’s suffering as his son and the judge, dismissing the horrific assault as “20 minutes of action.”

A convincing argument could be made this privilege-begetting-privilege system of justice is precisely conducive to the furthering of disparity and the disappearance of the nation’s middle class following the end of the manufacturing and production era.

Less privileged individuals rot in prison for lengthy periods, and as mentioned learn to perfect perpetrating crime, while those from wealthy backgrounds often escape with negligible sentences for breaking the same laws — making the concept of blind justice a complete farce. But when viewed as designed this way for the purposes of profit, this disparity suddenly makes sense.

However radical abolishing the prison system might sound, doing so would go further toward eliminating needless recidivism and improving the safety and peacefulness of communities everywhere — in its current construct, the system of incarceration clearly isn’t working toward those goals.

Tackling the causes of crime — addiction, mental illness, overcriminalization, etc. — would do more for positive change in the interim until abolition can be made tenable to the masses, though it ultimately can and should.

No ideal solutions currently exist, and in the absence of sweeping reform, abolishing prisons should be a matter of deliberate, sincere consideration for us all.

CNN director: Matt Gaetz reporting is ‘propaganda’ to ‘hurt him’ because he’s ‘a problem for the Democratic Party’
April 14th, 2021 Liberty Unyielding