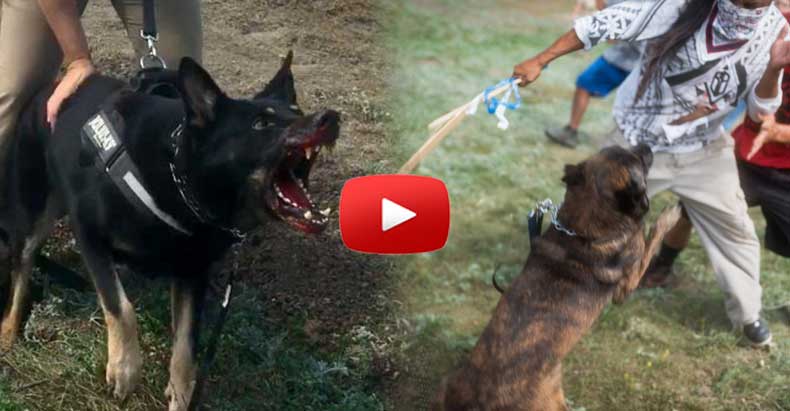 Members of the Standing Rock Sioux and at least 100 other Native American nations as well as activists and advocates peacefully chanted “water is life” while guards held dogs nearby to intimidate the crowd. Without warning, these security henchmen showered the demonstrators with pepper spray and released the dogs — at least six people were bitten, including a young child.

Called the Dakota Access Pipeline by those responsible for its construction — and an evil, immoral usurpation and exploitation by those who know better — the project is slated to span four states, stretching 1,172 miles, but threatens the reservation’s water supply and would invade sacred land.

For months, the Standing Rock Sioux have camped in the pipeline’s proposed path, halting construction at least temporarily as Energy Transfer Partners, the firm responsible, continues to intimidate, harass, and now attack protesters attempting to protect their own land.

Video of the moment of attack has, in fact, been difficult to obtain, since cell reception at the site frequently cuts off in what many suspect is a law enforcement attempt to cover up the company’s vicious quashing of the protest.

Immediately before video of the skirmish cuts out, a panicked protester can be heard screaming, “They’ve got trucks behind us, too!”

Sacred Stone Camp, the water protectors’ defensive encampment, posted a picture of a female security guard holding a choke-chain wearing dog to Facebook with the alarming description, “Yes, that is the blood of peaceful protestors on this dog’s mouth.”

Dogs indiscriminately bit anyone and anything in their path — including a horse — and at one point, in seeming karmic retribution, even turned on their handlers.

One day prior to the violent incident, the Standing Rock Sioux filed court documents stating they found several sites of “significant cultural and historic value” directly in the proposed path of the pipeline — a discovery made only recently when the tribe was finally allowed to survey the area.

According to tribal preservation officer Tim Mentz in court documents cited by the WSJ, burial rock piles and other significant discoveries were found by researchers.

“This demolition is devastating,” Archambault said, as quoted by the WSJ. “These grounds are the resting places of our ancestors. The ancient cairns and stone prayer rings there cannot be replaced. In one day, our sacred land has been turned into hollow ground.”

By the end of August, at least 4,000 protesters had converged on the site to help defend the land from pillaging by construction crews — who, incidentally, were recently revealed by the Army Corps of Engineers not to have obtained the mandatory easement necessary to proceed.

Also in late August, at the behest of North Dakota homeland security Greg Wiltz, state officials removed the demonstrators’ water supply — despite sweltering late summer heat — due to alleged disorderly conduct, including a laser aimed at a surveillance aircraft.

“The gathering here remains 100 percent peaceful and ceremonial as it has from day one,” LaDonna Allard, director of one of the prayer camps said after the removal of water. “We are standing together in prayer … Why is a gathering of Indians so inherently threatening and frightening to some people?”

Indeed, as video from the protest repeatedly proves, demonstrators have remained peaceful, only protecting themselves from brutal force and intimidation by the security firm and law enforcement when no other option but self-defense exists — as in the case of Saturday’s attack.

Despite this evidence, Morton County Sheriff Kyle Kirchmeier claimed in a statement cited by the WSJ that “individuals crossed onto private property and accosted private security officers with wooden posts and flagpoles […] Any suggestion that today’s event was a peaceful protest, is false.”

Viral video of the violent confrontation — which clearly shows protesters forced to defend themselves from the vicious animals and callous guards — was, of course, glaringly omitted from the Wall Street Journal’s report.

Mainstream media has all but ignored the ongoing protest, despite both its ballooning size and pertinence in the continuing struggle for Native Americans fighting naked government and corporate exploitation.

Challenges to construction of the Dakota Access Pipeline will be ruled upon by a federal judge sometime before September 9.

“This is nothing but repression of our growing movement to protect our water and future generations,” Tara Houska, national campaigns director for Honor the Earth, aptly summarized in August.

As one tribe member described, in a sentiment shared by most protesters, of Saturday’s mercenary attack in a post to Facebook:

“My daughter was bitten by one of the contractor’s vicious dogs today in direct action that once again stopped construction of their evil and immoral pipeline.

“No father has ever been prouder of one of his children then I am tonight for her being wounded battling for the future of her son and my grandson and for your children and your grandchildren.

“She is strong and as determined as ever to be remembered as one of her generation who courageously took a stand to kill their black snakes.”