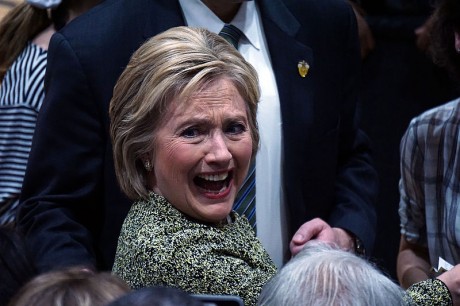 Could it be possible that Hillary Clinton is covering up a major illness that would make her unfit to serve as president? It has been my contention for a long time that Hillary Clinton would do or say just about anything in order to become “the first woman president”, but would she actually lie to the American people about her health in order to reach that “historic achievement”? In recent days the Clinton campaign has assured us over and over again about how healthy Hillary is, and she even opened up a jar of pickles for Jimmy Kimmel in order to prove how vigorous she is at her age. But we can all see that she has some very serious health problems. I have written about this previously right here and right here, but as time has gone by things have started to become a lot clearer. There are many that now believe that Hillary Clinton actually has Parkinson’s Disease, and I have to admit that I agree with them.

On Labor Day, Clinton had another of her epic coughing fits, and this time it happened during an election rally in Cleveland that was being broadcast nationwide. She attempted to laugh it off by making jokes such as “every time I think about Trump I get allergic”, but nothing could hide the fact that something was seriously wrong with her as the coughing fit went on for nearly four minutes…

Coughing can be a symptom of so many different illnesses, but it is interesting to note that it happens to be one of the symptoms of Parkinson’s Disease…

Difficulty swallowing, called dysphagia, can happen at any stage of Parkinson disease. Signs and symptoms can range from mild to severe and may include: difficulty swallowing certain foods or liquids, coughing or throat clearing during or after eating/drinking, and feeling as if food is getting stuck. As the disease progresses, swallowing can become severely compromised and food/liquid can get into the lungs, causing aspiration pneumonia. Aspiration pneumonia is the leading cause of death in PD.

By itself, it would be impossible to link Hillary Clinton with Parkinson’s Disease just based on her coughing. But the truth is that she has exhibited so many of the other symptoms as well.

According to Google, here are some of the other symptoms that Parkinson’s Disease victims often exhibit…

Tremor: can occur at rest, in the hands, limbs, or can be postural

Cognitive: amnesia, confusion in the evening hours, dementia, or difficulty thinking and understanding

A lot of those should ring a bell if you have been following Hillary’s bizarre behavior in recent months.

In this video, a medical doctor with 36 years of experience named Ted Noel puts the pieces together and explains how he reached his conclusion that Hillary Clinton is suffering with Parkinson’s Disease. I think that you will find that his reasoning is quite compelling…

And, it has been revealed that one of her top aides extensively researched a drug used to treat Parkinson’s and Alzheimer’s diseases.

While he worked for her at the State Department, Clinton Deputy Chief of Staff Jake Sullivan investigated the drug Provigil, according to an October 2011 emails sent to Clinton.

In addition to Dr. Noel, a whole host of other prominent physicians have also been questioning Hillary Clinton’s health in recent weeks. One of them was television personality Dr. Drew Pinsky, and shortly after he publicly questioned her health his show was canned by CNN. He reportedly was told to retract his statements about her health, but he refused…

According to sources close to Pinsky, the medicine specialist had been asked to retract his statements on the democratic nominee’s health and also received a series of nasty phone calls and e-mails over the his comments.

“CNN is so supportive of Clinton, network honchos acted like the Mafia when confronting Drew,” a source told Richard Johnson of Page Six. “First, they demanded he retract his comments, but he wouldn’t.”

What followed, according to a source close to Pinsky, was a series of nasty phone calls and e-mails which were described as “downright scary and creepy.”

The mainstream media is desperately trying to cover up the truth about Hillary Clinton’s health, but that is becoming an increasingly difficult task.

For instance, just today we learned that there is a wheelchair lift in her van.

So why would that be there? Did her campaign pick the van up at a used car lot because that is all they could afford and it just happened to have a wheelchair lift already installed in it?

The only reason why Hillary Clinton would be riding around in a van with a wheelchair lift is because somebody needs it, and I will give you only one guess as to who that might be.

A shock example of anti-Trump media censorship was caught on tape when Reuters ordered its cameraman to cut live footage of Trump receiving praise from African-American Bishop Wayne T. Jackson in Detroit.

The incident occurred as Jackson presented Trump with a shawl, a bible, and offered his prayers as the black audience cheered and clapped.

Perhaps aware of the devastating impact the optics of this moment would have on the media’s efforts to demonize Trump as a racist bigot, a voice is heard off-camera saying, “He’s getting a shawl!”

The cameraman then says, “I’m shooting this, I don’t care what they say….I’ll take a demotion for this…. you?”

“Shut it down,” insists the director,” followed by another voice asking, “Shut this down?”

“Yes Michael, do it,” orders the director.

We then hear the word “blackout” and the camera shakes before the live feed is cut.

No matter who wins, there is no way that you can say that this has been a fair election.

At one time the mainstream media was considered to be the guardian of truth in this country, but that notion is now completely dead.

With just a couple of months to go before the election, mainstream reporters are shamelessly acting as propaganda shills for the Clinton campaign. They are trying as hard as they can to hide the truth about Hillary Clinton’s health, and that could ultimately have severe consequences for all of us.