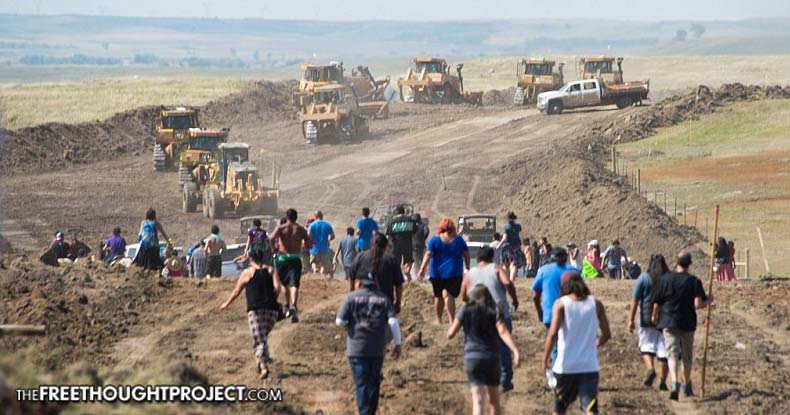 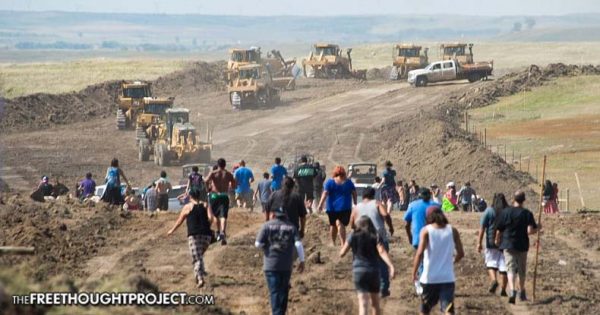 Following Saturday’s brutal attack on peaceful protesters by private security mercenaries and vicious guard dogs acting on behalf of Dakota Access Pipeline interests, it has been revealed the company responsible for construction deliberately targeted documented sacred and culturally significant areas for demolition — and crews likely chose the holiday weekend in order to avoid a court injunction.

On Sunday, the Army Corps of Engineers backed a motion for a temporary restraining order halting further construction. A federal judge ordered an emergency hearing, which was scheduled to take place late Tuesday.

The tribe’s historians had not been permitted onto the private property until recently to assess whether the area held cultural or other significance.

When demonstrators attempted to peacefully block crews from further destruction, security guards, or rather, mercenaries pepper-sprayed, tear-gassed, and indiscriminately sicced attack dogs on the crowd. Six people were bitten, including a pregnant woman and a young child, who reportedly had to be hospitalized.

“From where I stood along the road, I could see that a significant portion of the site we’d surveyed had been cleared. My son walked the length of the site and confirmed that the entire area that we had surveyed that week had been graded to a depth of more than a foot.”

Mentz requested but was denied permission to assess the scope of damage. Even from a distance, however, he said, “what I have been able to see is that any site that was in the pipeline corridor has been destroyed. Sites that are immediately adjacent to the pipeline corridor are buried under berms of soil and vegetation that are as high as eight to ten feet. Anything under those berms is damaged if not destroyed.”

As Mentz explained, shallow graves in which the dead are buried under rock cairns are common in this area — thus even the relatively shallow one-foot depth the crews removed likely disturbed a number of gravesites.

Mentz — like other protesters, advocates, and observers — suggested retributive, deliberate foul play on the part of the pipeline construction company in the decimation of these sacred sites, as he described the nearest active construction area being located some 20 miles away. He and others believed that construction was in no way imminent anywhere near the area he’d surveyed — in fact, in a court filing, Mentz mapped and pinpointed precise areas of concern to the tribe.

“I do not believe the timing of this construction was an accident or coincidence,” he stated. “It appears that DAPL drove the bulldozers approximately 20 miles of uncleared right of way to access the precise area that we surveyed and described in my declaration” to the court.

Cheyenne River Sioux Tribe, which has been allowed to intervene in the ongoing court battle, also filed an emergency motion for a restraining order on Sunday, stating, with emphasis added,

“Site Protectors of all ages, outraged at Dakota Access’s clear intent to engage in construction while knowingly destroying sacred sites identified earlier in the week, attempted to halt construction and preserve evidence. In a calculated response, Dakota Access hired a paramilitary security force to attack the site protectors, including women, children, and the elderly with vicious and dangerous breed dogs, such as Pit Bulls and German Shepherds, not trained for security service. Dakota Access paramilitary squad used canisters of tear gas, and pepper spray against the site protectors. A number of site protectors were injured by the pepper spray and gas, and bitten by the vicious attack dogs.”

Further, Frazier noted, “According to many witnesses at the scene, neither state nor county law enforcement officials were at the construction site during the incident. It is extremely suspicious to me that law enforcement became scarce at the exact time when DAPL’s hired guns were planning to attack the water defenders.”

Witnesses also described cell service suddenly cut immediately before dogs attacked demonstrators — and while police were not on scene, at least one helicopter circling the overhead was believed to be law enforcement.

“On Saturday, Dakota Access Pipeline and Energy Transfer Partners brazenly used bulldozers to destroy our burial sites, prayer sites and culturally significant artifacts,” Tribal Chairman David Archambault II stated, as quoted by the tribe in a post to Facebook. “They did this on a holiday weekend, one day after we filed court papers identifying these sacred sites. The desecration of these ancient places has already caused the Standing Rock Sioux irreparable harm. We’re asking the court to halt this path of destruction.”

Worse, according to Archambault, pipeline construction crews returned to the same area on Sunday — after the outrageous attack — to continue annihilating the sacred area.

“Destroying the Tribe’s sacred places over a holiday weekend, while the judge is considering whether to block the pipeline, shows a flagrant disregard for the legal process,” said Jan Hasselman, attorney for the Standing Rock Sioux, cited in the same aforementioned post. “The Tribe has been seeking to vindicate its rights peacefully through the courts. But Dakota Access Pipeline used evidence submitted to the Court as their roadmap for what to bulldoze. That’s just wrong.”

On Monday, despite the Labor Day federal holiday, James E. Boasberg — the same judge presiding over Standing Rock Sioux’s lawsuit against pipeline construction — took action by ordering a hearing on Tuesday in Washington, D.C., concerning both the attack and destruction of the documented significant sites.

In a court filing, the Army Corps of Engineers — the primary defendant in the case — agreed that, in order to maintain peace and public safety, it supported the motion for an emergency temporary restraining order.

Despite continuing construction by Dakota Access, the Army Corps of Engineers has yet to issue the required easement permitting construction to take place. Boasberg is expected to rule on the larger issue on September 9.

Deliberately targeting sacred sites for destruction belies a darker motivation beyond typical corporate profiteering — in fact, it shows a sickening and unprecedented degree of malice with no possible justification imaginable.

As Frazier aptly and tragically summarized of the companies responsible:

“They do not know the meaning of humanity.”