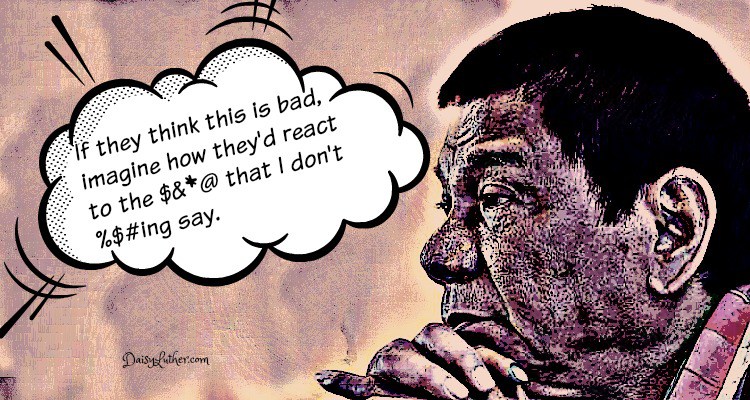 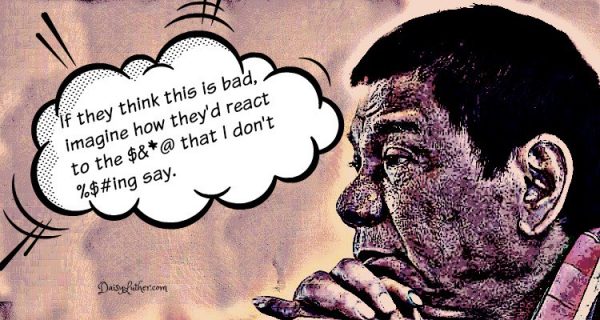 Outspoken Philippine President Rodrigo Duterte, who came to power just a couple of months ago, has caused a diplomatic incident by calling U.S President Barack Obama a “son of a whore”.

This isn’t exactly a new trend for Duterte.

In the past, President Duterte has called Pope Francis the “son of a whore”, US Secretary of State John Kerry “crazy” and recently referred to the US ambassador to the Philippines a “gay son of a whore”. (source)

Wow. And people say I don’t have a filter. It’s a bit biased, but here’s some background on Duterte.

Obama has called off a planned meeting in Laos due to the comment. Duterte’s outburst was in response to Obama publically saying he was going to raise the issue of the high numbers of drug smugglers and pushers dying in the Philippines. More than 2400 people have been killed since he came to power at the end of June.

“I don’t give a s*** about anybody observing my behavior,” he said. “I am a president of a sovereign state and we have long ceased to be a colony. I do not have any master except the Filipino people, nobody but nobody. You must be respectful. Do not just throw questions. Son of a whore, I will swear at you in that forum,” he said.

Referring to his critics, he added: “There are others who have the mental capacity of dogs who lap at the ass of the Americans.” (source)

Well, gee.  Don’t hold back, Duterte. Tell us how you really feel.

Human rights activists say that the vast majority of the deaths are extra-judicial killings  and that many of those ‘executed’ or dying in custody had not had any trial let alone a fair one.

The Filipino government claims that the deaths are the result of police operations to stamp out drugs, which are a major problem in the country.

The move came hours after the US President cast doubt on the planned talks, saying he had asked his team to find out if “constructive, productive conversations” were possible.

“Obviously, the Filipino people are some of our closest friends and allies and the Philippines is a treaty ally of ours,” he told reporters at a G20 meeting in China before he traveled to Laos.

“But I always want to make sure that if I’m having a meeting that it’s actually productive and we’re getting something done.

“What is certainly true is that the issues of how we approach fighting crime and drug trafficking is a serious one for all of us, and we’ve got to do it the right way.”

While not getting into the human rights aspects of what goes on in the Philippines it seems somewhat ironic that when President Obama walks into foreign countries uninvited, it matters not what they call him. (Cough. Syria.) The boots stay on the ground and he digs in. But when a president of a sovereign nation challenges him regarding a country he doesn’t want to help out, and he cancels a meeting due to the insult.

This may surprise you all, but I, too, have been called names. I generally go about my business and don’t cause international incidents. High road, and all that stuff.

Although it wasn’t very nice of Duterte, I think pulling out of this meeting has less to do with Obama being called a ‘son of a whore’ and more to do with Duterte not agreeing with what Obama, in his self-appointed role of police man of the world, has to say.

Publically, an apology has been forthcoming. According to BBC World News:

“While the immediate cause was my strong comments to certain press questions that elicited concern and distress, we also regret that it came across as a personal attack on the US president,” a statement by his office said.

Privately, I’ll wager that he still stands by what he said…and possibly has added a few expletives to the original comment.