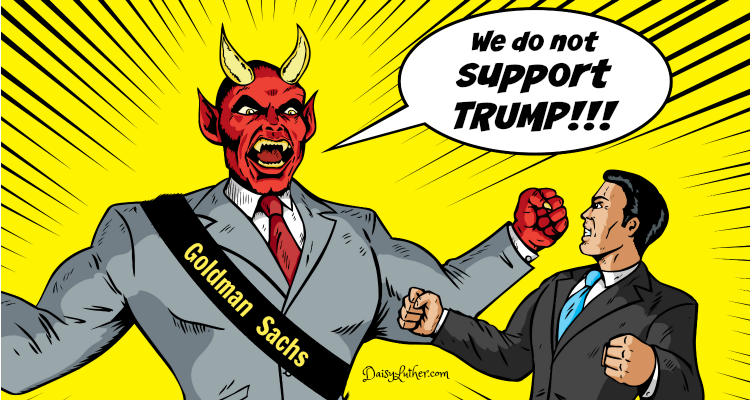 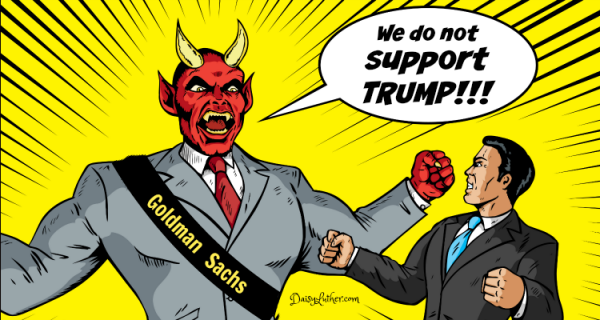 Just in case you somehow missed the fact that the corporate overlords are pulling for Hillary Clinton because they know she’s easy to manipulate when the right amount of money is involved, here’s the latest.

Goldman Sachs has banned their employees from donating to the Trump-Pence campaign.

A quick primer on Goldman Sachs: basically, they rule the world. GS is an American multi-national banking firm that admitted to defrauding its investors out of billions of dollars in the 2008 financial crisis while making tens of billions from the crisis that many say they deliberately caused. To ice the cake, they got bailed out by taxpayers to the tune of $10 billion more, while ordinary people lost everything and are still suffering to this day from GS’s actions. I could go on and on listing how truly awful this corporation is, but this gives you the general idea.

Back to the campaign.

Goldman Sachs has created a set of rules that disallows their executives – you know, the ones who actually have big money to spend – from donating to the Trump-Pence campaign. Ironically, this was instated to eliminate any suspicion of “pay to play”. The irony comes from the fact that Hillary Clinton, whose campaign was not mentioned, is infamous for pay-to-play” shenanigans. (Learn more about that here.)

…the rules ban donations to politicians running for state or local offices, as well as donations to state officials who are seeking federal office. That makes campaign contributions to the Trump-Pence ticket a no-no. Pence is the current governor of Indiana.

In the memo, a copy of which was obtained by Fortune, Goldman specifically mentions the Trump-Pence campaign as an example of one Goldman partners can no longer support. Among the type of donations that are banned, according to the memo, are, “Any federal candidate who is a sitting state or local official (e.g., governor running for president or vice president, such as the Trump/Pence ticket, or mayor running for Congress), including their Political Action Committees (PACs).”

At the same time, the rules do not restrict donations to Clinton-Kaine. Kaine is a U.S. Senator for Virginia, and not considered a local official under Goldman’s rules.

How is this even legal? How can an employer limit an employee’s ability to support the candidate of his or her choice?

But don’t worry. Our election process is fair. Your vote counts. And if your tooth falls out, a magical fairy will ride a unicorn to your house and put money under your pillow. Shhh…go back to sleep.