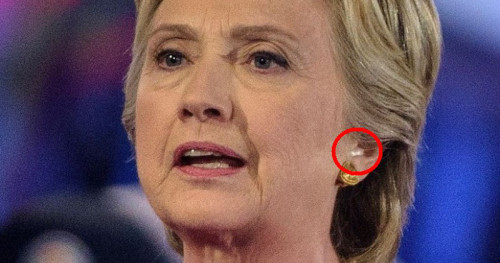 Wednesday night, NBC’s Matt Lauer hosted a live townhall event — the Commander In Chief Forum in New York City — wherein he separately interviewed Hillary Clinton and Donald Trump on national security, military affairs and veterans issues in front of an audience mainly made up of members of the military.

Here’s the HD image of Hillary with the ear piece in her left ear:

Woods also tweeted a Clinton email from the Wikileaks archive in which Huma Abedin asked Hillary, “Did u take your earpiece or do I need to get it?”

Woods then linked to an article by TruePundit which reported that Hillary was wearing an earpiece to receive “stealth coaching” during the NBC live town hall event.

According to TruePundit, “NYPD sources involved with the NBC forum’s security detail confirm Clinton was wearing an ‘inductive earpiece,’ the same technology employed by almost all lead Broadway actors to receive forgotten lines and stealth off-stage cues from directors. The flesh-colored earbud is easily concealed. There are no wires running directly to the ear like you see with the units employed by Secret Service protection detail personnel.” The article goes on to provide technical details about the earpiece, asserting that it is “almost invisible to anyone” and is “normally issued to law enforcement or corporate security teams.”

Note: I tried to access TruePundit, but got a “500 Internal Server Error” message. Hmm….

Below are a picture and description of Inductive Earpiece from Professional Sound Corporation:

Professional Sound Corporation® has met the high demands for discrete cueing with the development of the Inductive Earpiece. This inductive cueing system is quite simple to use. Audio is transmitted from any source via an inductive loop. The talent [actor] can wear a small, flexible neck loop which couples audio via a low level magnetic field into a hearing aid style earpiece. Alternately, a perimeter or “room loop” may be used to encircle an entire room or stage allowing many people to receive the same cue. Both of these two uses allow the talent to receive a discrete cue on camera.

This is not the first time Clinton has faced charges that she was wearing an earpiece during a crucial event – similar claims were made after her appearance in front of the House Select Benghazi Hearing in October last year.

Of course, the earpiece could have just been a hearing aid, although there doesn’t appear to be any admission or record of Hillary wearing one in the past.

Go see it for yourself. Here’s the full video of the forum. Hillary was the first to be interviewed. (Editor’s note: The video that Dr. Eowyn originally posted is no longer available on YouTube. We have replaced it with a video from NBC News.)

Here are screenshots I took of Hillary at the 4:10 and 5:06 marks of the video. I painted the yellow arrows pointing to something secreted inside her left ear right above her gold ball earring.

By the way, there’s photographic evidence that Barack Obama wore an ear piece in the third presidential debate in 2012. (See my post “Was Obama wearing an ear phone in 3rd debate?“)