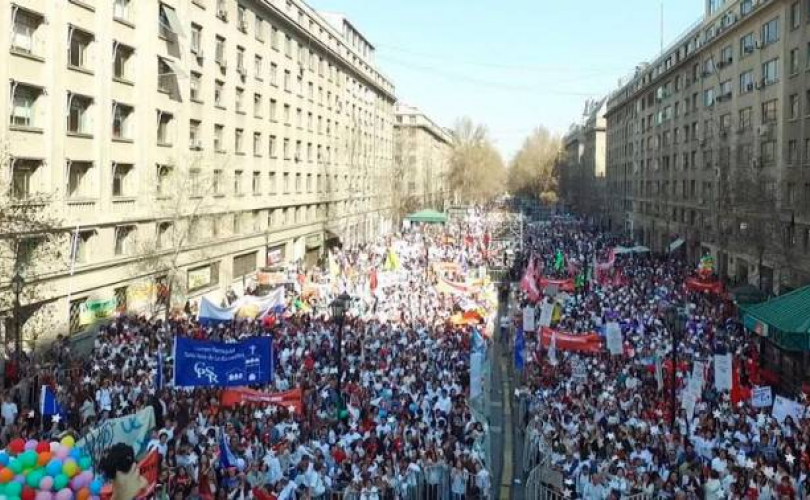 In a tremendous display of solidarity against the evil that is known as abortion, aka the murder of the unborn, 100,000 Chileans took to the streets of Santiago to “Celebrate Life” and protest the murder of babies.

SANTIAGO, September 5, 2016 (LifeSiteNews) – In a massive rejection of the government’s insistence on pushing through legislation to open the country to “legal abortion,” Chileans from all walks of life, social status and religions amassed this past Saturday in downtown Santiago for a “Celebrate Life” rally.

Evangelical Christians along with Catholics and others denounced the legislative push by President Michele Bachelet and other elected officials which calls for legalizing abortion of unborn children conceived in rape, or who are determined to have a medical condition incompatible with life, or where there is danger to the mother’s life.

Many of those present at the rally are particularly concerned with members of the Christian Democratic Party who are supporting the pro-abortion legislation. “It is a mockery that members of a party that calls itself ‘Christian’ dare to legalize the killing of the innocent,” lamented Carmen Croxatto of Chile’s Pro-Life Pro-Family Network.

Senator Carolina Goic, the president of the Christian Democratic Party and chair of the Senate Heath Committee, is reportedly ready to push the legislation to the next step. “She needs to work to defeat this legislation now, and not approve it moving forward to the full Senate,” said Croxatto.

Pro-life leaders promise to make this the key determinant in the upcoming elections, declaring that any candidate or party who supports this legislation will not get their vote. “We do not want to follow the other countries of the world which have abandoned the protection of the weakest members of the human family, starting first with so-called “only limited abortion” and ending up with even more horrific consequences and all the damage that comes in the wake of abortion to society in general,” according to Elizabeth Bunster of Chile es Vida.”

These people are not your typical establishment, propaganda fed “pro-lifers” either. No, no. These are people that oppose the murder of the most innocent among us on the grounds of rape, incest, medical problems and yes, even the mother’s life! Good for them!

In fact, our friend Theodore Shoebat created a video on this, in which he really got at the heart of the matter. Take a look.

I recall Donald Trump getting blasted by both the “right” and the “left” over his comments that a mother, as well as doctor, should be held to justice when it comes to murdering children and the “pro-life camp beat him as hard as the communists! He eventually backed off his comment, but he was right in the first place!

Thank God there are still abortion abolitionists in the world! These Chileans should be commended for their stand against the evils of abortion. Well done my friends, well done!