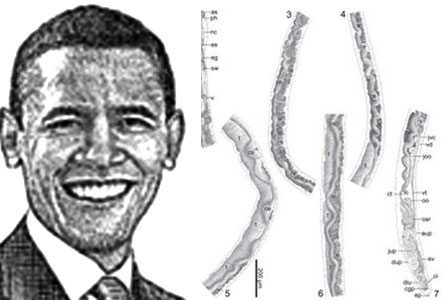 Can’t make it up, and the jokes write themselves.

A scientist studying a deadly turtle pathogen decided to name the species after President Obama – naming Baracktrema obamai in his honor, apparently.

The parasitic flatworm competes with the host’s immune system and thwarts it in order to thrive and reproduce. The results are often deadly for the turtle.

Perhaps science saw a similarity between its behavior and the way the constitutional system of checks and balances has been thwarted by an infiltration of Obama’s brand of governance, which has in effect, hijacked the economy and turned it a state-run zombie organism.

What other type of organism weakens its host, overtaxes its system and allows its borders to be infiltrated by potential pathogens and guts its defenses against it at the same time? PerhapsBaracktrema obamai could be viewed as a sort of nature’s Cloward & Piven strategy to undermine to the point of collapse.

World, meet Baracktrema obamai, a deadly turtle pathogen named in honor of our current president. Believe it or not, it’s supposed to be a compliment.

The new genus and species of parasitic flatworm was introduced this week in an article in the Journal of Parasitology. The tiny creatures, which are the thickness of a human hair, invade the lungs of freshwater turtles in Malaysia, often with deadly consequences.

Thomas Platt, a turtle disease expert who discovered the new species shortly before his recent retirement from St. Mary’s College, said that the name is meant to honor President Obama — not gross him out. Though most people (understandably) aren’t big parasite fans, Platt has a deep respect for the resilient little creatures.

They “face incredible obstacles to complete their [life cycles] and must contend with the immune system of the host in order to mature and reproduce,” he said in a statement.

Incidentally, Platt claims to have discovered a common ancestor in his family line and that of President Obama, and thus claims a somewhat distant relationship that inspired his decision to name the newly discovered parasite.

“I have named a number of species after people I admire, from my father-in-law, my PhD adviser, and good friends who are academics and/or amateur naturalists,” Platt said. “Baracktrema obamai will endure as long as there are systematists studying these remarkable organisms.”

The Washington Post pointed out that while many presidents have had libraries, schools, streets, mountains and the like named after them, Obama gets a flatworm parasite… to add to a list of other creatures, big and small, that have been given his namesake.

Somebody has been sucking the system dry.