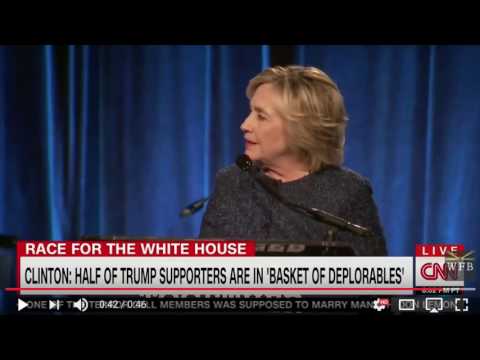 “To just be grossly generalistic, you can put half of Trump supporters into what I call the basket of deplorables,” Clinton said. “Right? Racist, sexist, homophobic, xenophobic, Islamaphobic, you name it.”

“What’s truly deplorable isn’t just that Hillary Clinton made an inexcusable mistake in front of wealthy donors and reporters happened to be around to catch it, it’s that Clinton revealed just how little she thinks of the hard-working men and women of America,” he said.

Donald Trump followed up with a Tweet of his own:

While Hillary said horrible things about my supporters, and while many of her supporters will never vote for me, I still respect them all!

“While Hillary said horrible things about my supporters, and while many of her supporters will never vote for me, I still respect them all!” Trump tweeted.

Clinton then backpeddled on her statements.

“Last night I was ‘grossly generalistic,’ and that’s never a good idea. I regret saying ‘half’ — that was wrong,” Clinton said in a statement.

“If I were to be grossly generalistic, I would say you can take Trump supporters and put them in two big baskets,” Clinton added. “There are what I call the deplorables — the racists, you know, the haters, and the people who are drawn because they think somehow he’s going to restore an America that no longer exists. So just eliminate them from your thinking, because we’ve always had an annoying prejudicial element within our politics.”

Trump’s running mate, Governor Mike Pence, said at Saturday’s Values Voter Summit in Washington, “The truth of the matter is that the men and women who support Donald Trump’s campaign are hard-working Americans, farmers, coal miners, teachers, veterans, members of our law enforcement community, members of every class of this country, who know that we can make America great again.”

“Let me just say, from the bottom of my heart, Hillary, they are not a basket of anything,” Pence added. “They are Americans and they deserve your respect.”

I do tend to agree with Governor Pence. I have many friends who support Trump. While we may disagree on supporting him, they are Americans who are not a basket of deplorables.

Yet, this is not the first time that Clinton has sought to paint supporters of Donald Trump as racist bigots. Last month, Clinton claimed that Trump built his entire campaign on “Prejudice and paranoia.”

“He’s taking hate groups mainstream and helping a radical fringe take over the Republican Party,” Clinton said in Reno, Nevada. “His disregard for the values that make our country great is profoundly dangerous.”

Well, let’s not forget that Hillary is a hate group in and of herself. Remember when she claimed there was a “vast right wing conspiracy” against her adulterous husband as he lied to the American people with her knowledge? She is the one flirting with America’s enemies and joined at the hip with people like Muslim Brotherhood-tied Huma Abedin. She is the one who sought to appease Muslims in Pakistan with your tax dollars while lying about Benghazi. She is a disciple of Saul Alinsky who was a Communist and enemy of America.

So, Clinton, throw out your names all you want, the real enemies in our midst are people such as yourself.