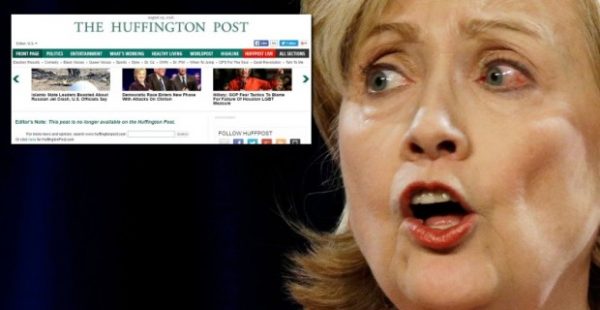 Late last month, a blogger on Huffington Post named David Seaman who’s been on CNN and Fox and who describes himself as “liberal in many ways,” discovered that not only did HuffPo summarily delete his two posts on Hillary Clinton’s health, the liberal website effectively banned him by revoking his posting privileges. (See “Media’s Orwellian censorship on Hillary Clinton’s health: HuffPo deletes article; bans author”)

In the video below, Seaman calls the media out for their collusion with Hillary.

Some excerpts from what Seaman said:

While admitting that the media “has always been lazy and politically biased,” Seaman says that what the media is doing in this election with “fake poll numbers” is “beyond the pale” — “It is Orwellian, like someone just flipped the switch and we’ve got full-blown 1984 stuff right now, where Hillary Clinton is the great leader we all must support, and Donald Trump is ‘sexist’ and ‘racist’ and somebody we all must despise. But why must we despise this moderate businessman who is essentially the Internet’s candidate this time around?”

Seaman calls what the corrupt MSM do as “gaslighting” — the psychological abuse of the American people by manipulating us to doubt our perception of reality and our sanity via “fake poll numbers” that show Hillary winning, when if you go outside or talk to your peers, “it is clear Donald Trump has more organic support than Hillary Clinton.” For example, 65,000 people attended a recent Trump rally, in contrast to only 3,000 people showing up for a recent Hillary rally [at a Baptist convention where there were thousands of empty chairs even though Blacks are supposed to be big supporters of Hillary].

Seaman claims that the media are covering up Hillary rallies’ low attendance with camera angles and “outright deception” to shut Trump and his supporters out of this election “for some reason”. Seaman laments that this deception “is not being discussed” and “we don’t know why this is happening or who ordered it,” but he says “the media has marching orders” and “are doing something incredibly dishonest” and in so doing, “are jettisoning hundreds of years of free speech protections and press protections to get this woman in there,” whom Seaman describes as a “vicious, narcissistic” and “forgetful” “predator” — all not leadership qualities, but rather “a recipe for disaster.” Seaman wants to know “why the establishment is so hell-bent . . . on this woman getting the White House. . . . to the exclusion of all else, to the exclusion of fact, honesty and even their own party” — referring to how Bernie Sanders was treated — “as if she’s some selected royalty.”

Seaman calls what the Democrats have done and are doing “creepy and unacceptable” and gives some credit to the GOP for, despite initial resistance, acceding to the “overwhelming support” for Trump and electing him as their nominee.

Seaman then singles out the New York Times for its “gaslighting”, citing these examples:

Seaman points out that it wasn’t that hot at the 9/11 ceremony, no one else in the audience was overheated, and that what Hillary has is “the late stage” of “a very serious neurological disorder”. He points to videos of her having a seizure as indicative of something “clearly out of the ordinary” and that the NYT is engaged in propaganda and gaslighting, not journalism, the purpose of which is to discourage us into thinking that Hillary “inevitably” will win the election, and so we don’t go to the polls on November 8.

For our posts on the media’s and academe’s in-your-face pro-Hillary bias, see:

See also “How we know the Trump vs. Hillary polls are wrong”.