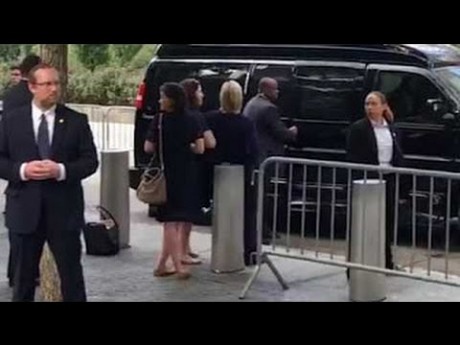 What was once unthinkable has now become a very real possibility.  We have all seen the video which shows Hillary Clinton fainting and collapsing into the arms of Secret Service agents as she waited to get into her van following an abrupt exit from a ceremony commemorating the 15th anniversary of the 9/11 terrorist attacks.  What has been obvious to many of us for quite a while is now being talked about on every political talk show in America.  Not too long ago, you were called a “conspiracy theorist” if you dared to question Clinton’s health, but today it is the central issue of the presidential campaign.  With less than two months to go until election day, all of a sudden we are facing some unprecedented scenarios.  Last month, I openly pondered if Clinton’s rapidly declining health would allow her to make it to election day, and today it is being reported that Democratic operatives are scrambling to figure out who would replace her if she does decide to drop out.  This has already been the craziest election season in modern times, and I have a feeling that it is about to get even crazier.

For Clinton, it isn’t just the fact that she collapsed in public that has her in trouble.  An even bigger issue is the fact that her campaign willingly chose to lie about her health status, and this even has many Democrats up in arms.  The following comes from an excellent piece by Damon Linker…

After Clinton was diagnosed with pneumonia and put on antibiotics, she did not, as her physician recommended, take time out to rest. Instead, she attended a fundraiser featuring Barbra Streisand. Then on Sunday morning, she attended the 9/11 commemoration, became “overheated,” and woozily wobbled rather dramatically. Ninety minutes later she exited her daughter Chelsea’s apartment building to tell the press she was “feeling great.” The Secret Service permitted a young girl to come over to give the candidate a hug.

It was only a few hours later when her campaign finally announced that she has pneumonia and is recovering.

The most charitable reading of this timeline is that her campaign — presumably with the blessing and perhaps insistence of the candidate — fully intended to keep her illness a secret from the public. Let’s be clear about what this means: Her campaign intended to lie.

Of course the Clintons have made a career out of lying, and Hillary’s trail of lies has been well documented, but this may be the lie that breaks the camel’s back.

So now that the story has changed several times, are we supposed to trust them when they tell us that Hillary Clinton truly does have pneumonia?

But instead of bacterial or viral pneumonia, Hillary Clinton may have something called aspiration pneumonia.

Aspiration pneumonia is the leading cause of death for those suffering from Parkinson’s Disease, and if you have not read the article that I did linking Hillary Clinton with Parkinson’s Disease you can find it right here.  A case of aspiration pneumonia would explain all of the coughing fits that Clinton has been experiencing, and it would be perfectly consistent with what Dr. Ted Noel and other health professionals have been saying about her medical condition.

Since I wrote about this last, it has also been documented that Hillary Clinton’s motorcade has been arriving and leaving with an ambulance wherever she goes.

That is not standard operating procedure, and there is no ambulance following Trump around.

What are they still not telling us about Clinton’s health?

Unfortunately for the Democrats, they can’t force Clinton out of the race.

No matter how sick she becomes, she is going to remain the nominee until she willingly withdraws.

And of course this is a woman that would do or say just about anything to become “the first woman president”, and so getting her to withdraw would take something truly extraordinary.

But if by some miracle she did withdraw, the national committee of the Democratic Party would hold a special gathering to select a new nominee…

According to the rules of the Democratic Party, the national committee is responsible for filling the position. Party officials would each cast one vote at a special meeting and the winner is whoever gets the majority.

So who would be the choice if Clinton is unable to move forward?

According to Emmy award winning broadcaster David Shuster, insiders are indicating that Joe Biden would be the choice if Hillary were to withdraw.

But of course there would be others that would want to elevate Tim Kaine to the top of the ticket, and many liberals would make a big push for Bernie Sanders or Elizabeth Warren.

There is even talk that if Hillary Clinton withdrew close enough to election day that it could cause Barack Obama to suspend or postpone the election until a “fair” election could be held.

The establishment is in a state of alarm, because they desperately want to keep Donald Trump out of the White House, and their only hope of doing that is physically deteriorating right in front of their eyes.

Let us certainly hope that they don’t try to monkey with the timing of the election, but if that is what they felt that they had to do in order to defeat Trump I have no doubt that they would try to make that move.

Politics in America is a very dirty game, and the establishment is not about to lay down and roll out the red carpet for Donald Trump.  It remains my contention that they are going to move heaven and earth if necessary to keep him from ever setting foot in the Oval Office.

In just a couple of months, all of this will hopefully be over.

But until then events are likely to get even stranger, and next month we may see an “October surprise” or two that we aren’t even anticipating right now.