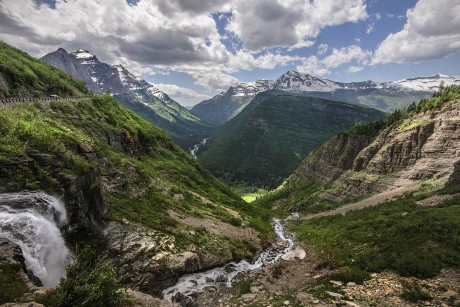 Thousands of Americans are flocking to “Big Sky” country, and this movement has become so prominent that it has even caught the attention of the mainstream media. Within the last several weeks, both The Chicago Tribune and The Economist have done major articles on this phenomenon. From all over the country, conservatives, preppers and Bible-believing Christians are moving to Montana, Wyoming, Idaho and the eastern portions of Oregon and Washington. As you will see below, this region has become known as the “American Redoubt”, and for a variety of reasons it is considered by many survivalists to be one of the top “safe zones” for when things really start falling apart in this nation.

Many of you that are reading this article may think that it is quite strange that families are quitting their jobs, packing up everything they own and moving to the middle of nowhere, but for those that are doing it this actually make perfect sense.A recent Chicago Tribune article on this phenomenon began by profiling an ex-California couple that decided to flee the state for the friendly confines of north Idaho…

Don and Jonna Bradway recently cashed out of the stock market and invested in gold and silver. They have stockpiled food and ammunition in the event of a total economic collapse or some other calamity commonly known around here as “The End of the World As We Know It” or “SHTF” – the day something hits the fan.

The Bradways fled California, a state they said is run by “leftists and non-Constitutionalists and anti-freedom people,” and settled on several wooded acres of north Idaho five years ago. They live among like-minded conservative neighbors, host Monday night Bible study around their fire pit, hike in the mountains and fish from their boat. They melt lead to make their own bullets for sport shooting and hunting – or to defend themselves against marauders in a world-ending cataclysm.

And of course the Bradways are far from alone. Over the past 10 years, approximately five million people have fled the state of California. If I was living there, I would want to move out too. Once upon a time, countless numbers of young people were “California Dreaming”, but those days are long gone. At this point, the California Dream has become a California Nightmare.

Only a very small percentage of those leaving California have come up to the Great Northwest, but it is a sizable enough number to make a huge impact. Unfortunately, many of those that have come from California want to turn their new areas into another version of what they just left, and that is often firmly resisted by the locals.

But it isn’t just California – there are people streaming into the “American Redoubt” from all over the nation, and many of them are some of the finest people that you could ever hope to meet.

In a widely read manifesto posted in 2011 on his survivalblog.com, Mr Rawles, a former army intelligence officer, urged libertarian-leaning Christians and Jews to move to Idaho, Montana, Wyoming and a strip of eastern Oregon and Washington states, a haven he called the “American Redoubt”.

Thousands of families have answered the call, moving to what Mr Rawles calls America’s last big frontier and most easily defendable terrain. Were hordes of thirsty, hungry, panicked Americans to stream out of cities after, say, the collapse of the national grid, few looters would reach the mostly mountainous, forested and, in winter, bitterly cold Redoubt. Big cities are too far away. But the movement is driven by more than doomsday “redoubters”, eager to homestead on land with lots of water, fish, and big game nearby. The idea is also to bring in enough strongly conservative voters to keep out the regulatory creep smothering liberty in places like California, a state many redoubters disdainfully refer to as “the C-word”.

Who wouldn’t want to live where the air is clear, the water is clean and the sky is actually brilliantly blue and not the washed out grayish blue that you get in most major cities?

And just having some breathing space is reason enough for some people to move to the Great Northwest. If you can get at least a few acres, you will quickly discover the joy of not having neighbors crammed in around you on every side.

Others wish to move to an area with a low population density for more practical reasons. As the New York Times recently reported, crime is rising in large cities all over America…

Murder rates rose significantly in 25 of the nation’s 100 largest cities last year, according to an analysis by The New York Times of new data compiled from individual police departments.

The findings confirm a trend that was tracked recently in a study published by the National Institute of Justice. “The homicide increase in the nation’s large cities was real and nearly unprecedented,” wrote the study’s author, Richard Rosenfeld, a criminology professor at the University of Missouri-St. Louis who explored homicide data in 56 large American cities.

Sadly, this is just the beginning. The chaos that we have seen in Dallas, Baton Rouge, Milwaukee, Ferguson, Baltimore, Chicago and elsewhere is going to get much worse. As the economy continues to unravel, we are going to see civil unrest on a scale that none of us have ever seen before. When that time comes, those that have moved to the middle of nowhere will be very thankful that they got out while the getting was good.

Over the last several years, my wife and I have met countless numbers of people that have moved up to the Great Northwest. All of their stories are different, but there is one common theme that we have noticed.

In the vast majority of cases, families tell us that they moved to the Great Northwest because they felt that God was calling them to do so. Individuals from many different churches and denominations have all felt the same call, and that creates a sort of kinship that is quite unusual these days.

Something big is happening in the Great Northwest. If you have never been up here, you might want to check it out some time.

And once you get here, you may never want to go home ever again.