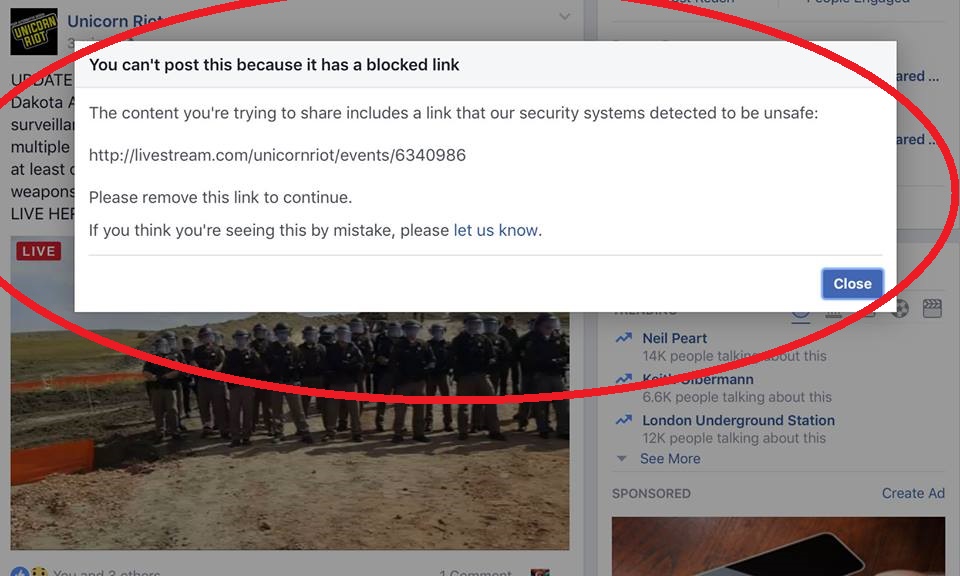 North Dakota — It didn’t take long after the National Guard was activated in North Dakota for militarized law enforcement to descend upon the site of the Dakota Access Pipeline. Yesterday, mass arrests began as riot gear-clad police attempted to break up Native American opposition to the construction of the pipeline, which has been halted at one location but continues elsewhere.

According to independent news outlet Unicorn Riot, at least 20 protesters, or “water protectors,” have been arrested at gunpoint along with medics and two journalists. Police issued a one-time warning to “water protectors” that any trespassers would be arrested. The warning came after several people locked themselves to construction equipment in acts of civil disobedience on Tuesday.

Unicorn Riot, which has been broadcasting live video of the tense standoff in North Dakota, says Facebook has been censoring their link from livestream.com.

[UPDATE: A Unicorn Riot collective member confirmed to Anti-Media via email that Facebook was blocking the video link with its “automated censorship system.”

“At a critical moment of our coverage of a Dakota Access Pipeline direct action today, Facebook’s automated censorship system blocked our video URL, shortly before two of our journalists were arrested onsite. As we started to cover today’s direct action, our collective members immediately noticed that the full Livestream event URL (https://livestream.com/unicornriot/events/6340986) was being blocked from Facebook. Posts and comments with the URL both immediately triggered popup security alerts. We tried putting the same URL through Bitly shortening and that official Unicorn Riot page post was deleted by Facebook within a few minutes. Finally we went with sharing our ‘Live Channel’ URL on our own website which had the embed included on it.

“We also verified that the ‘Facebook Debugger’ warned that our live video URL violated ‘community standards.’ Both Facebook and law enforcement acted to block our media distribution today, but we will not let them stop our mission to amplify the voices of people who might otherwise go unheard, and broadcast the stories that might otherwise go untold.

“Also, as one member of the collective, I should point out it is obviously concerning when a large media conglomerate blocks URLs to competing video platforms.”]