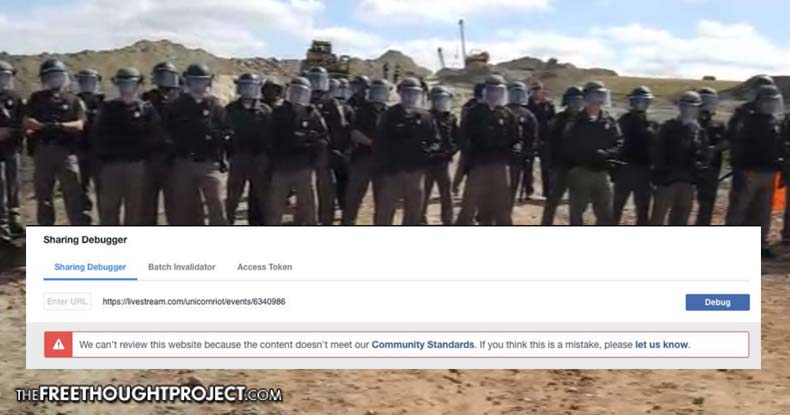 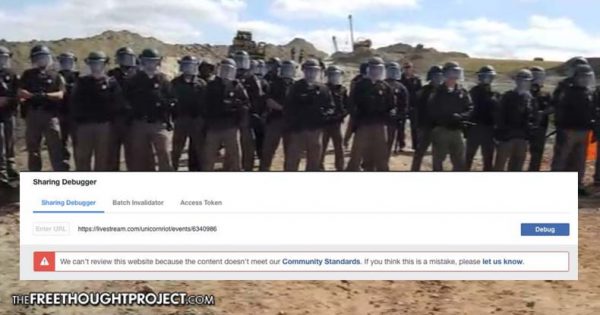 The alternative media group, Unicorn Riot found themselves on the receiving end of the iron fist of Facebook censorship this week. During the middle of the group’s live coverage of riot police clashing with protesters at a construction site of the Dakota Access pipeline, Facebook cut their feed and banned the livestream link from being shared anywhere on its network.

Unicorn Riot has been on the ground since the protests began, providing an uncensored glimpse into the militarized police state being constructed around the protesters. However, Facebook has now rejected their coverage noting that “our security systems detected to be unsafe.”

According to reports, twenty-two protesters were arrested by police in riot gear, including two Unicorn Riot journalists.

In an emailed statement to the Antimedia, a member of the Unicorn Riot said

“At a critical moment of our coverage of a Dakota Access Pipeline direct action today, Facebook’s automated censorship system blocked our video URL, shortly before two of our journalists were arrested onsite. As we started to cover today’s direct action, our collective members immediately noticed that the full Livestream event URL (https://livestream.com/unicornriot/events/6340986) was being blocked from Facebook. Posts and comments with the URL both immediately triggered popup security alerts. We tried putting the same URL through Bitly shortening and that official Unicorn Riot page post was deleted by Facebook within a few minutes. Finally we went with sharing our ‘Live Channel’ URL on our own website which had the embed included on it.

Blaming “both Facebook and law enforcement” for blocking their media distribution, the collective member vowed, “we will not let them stop our mission to amplify the voices of people who might otherwise go unheard, and broadcast the stories that might otherwise go untold.”

“Also, as one member of the collective, I should point out it is obviously concerning when a large media conglomerate blocks URLs to competing video platforms,” the Unicorn Riot member concluded.

According to Motherboard, a Facebook spokesperson told them that the post was removed from Unicorn Riot’s page after the platform’s automatic spam filter mistakenly flagged the Livestream link.

“The link was removed in error and restored as soon as we were able to investigate. Our team processes millions of reports each week, and we sometimes get things wrong. We’re very sorry about this mistake,” the spokesperson said.

This exact same “unsafe” detection happens to the Free Thought Project on a regular basis. When articles go viral exposing a glaring case of police brutality or government corruption, Facebook quickly flags them as “unsafe,” and the links become unclickable and unsharable — even in private messages.

Eventually, Facebook gets enough complaints from readers who tell them that it is not unsafe and the link is restored. However, the momentum of the sharing and virility has been rendered effectively impotent by the previous move and the information is stopped in its tracks.

Facebook censorship is coming to an ugly head. In just the past month and a half, we’ve seen the social media giant deactivate the account of Korryn Gaines, who was live streaming her arrest, just before being killed by police. We’ve also seen Facebook censor the iconic image of the Napalm Girl, as well as removing any mention of Hillary Clinton’s collapse in the trending section.