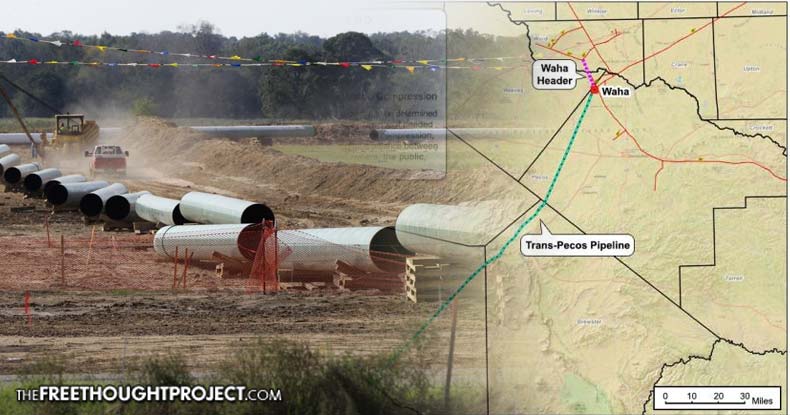 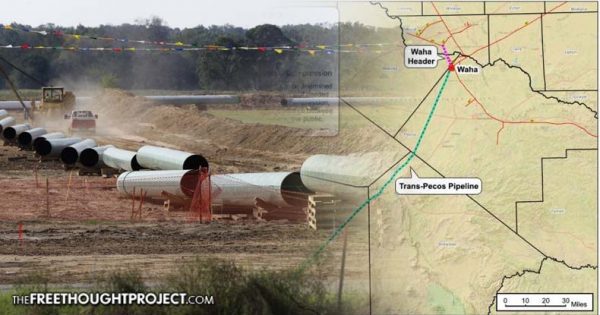 Energy Transfer Partners, the company responsible for construction of the hotly contentious Dakota Access Pipeline, has another controversial pipeline project with the potential to contaminate drinking water and the environment and destroy an area in Texas described as sacred and environmentally vital — and the ruthless company has been suing landowners to snatch their property for its own profiteering.

Known as the Trans-Pecos pipeline, the relatively short 143-mile project would carry natural gas from western Texas’ Permian Basin — likened to “America’s Saudi Arabia” as the country’s “Most Important Oil and Gas Resource” by Forbes — across the border into Mexico. But this project will run through the state’s pristine, remote Big Bend area, considered sacred to some and an environmental treasure to others, and — despite Texas’ long history of devotion to Big Oil and Gas — has sparked vociferous debate about property rights and corporate power.

“It’s a sacred landscape,” explained Texan David Keller, an archaeologist at Sul Ross State University’s Center for Big Bend Studies, for the Texas Tribune last year. “It truly is the last best place in Texas. When you destroy that landscape, you lose that sense of place.”

Headed by billionaire Kelcy Warren, Energy Transfer Partners (ETP) has taken 40 Big Bend ranchers to court with eminent domain lawsuits to wrest them of their property under the premise the pipeline would be in the public interest — a claim backed by proponents who say construction and implementation would bring much-needed cash to the area’s impoverished towns.

Although the majority of Texans describe themselves as friendly to Big Oil, the Trans-Pecos pipeline’s Big Bend path exposed a rift the state hadn’t previously experienced.

“They figure they can just show up and condemn your land,” landowner Tom Beard told the Tribune. Beard and his wife and former Brewster County judge, Val, noted they’d never had concerns about the state’s pervasive oil and gas industry — until they caught a surveyor for ETP trespassing unannounced and unwelcome on their land in March.

“I think energy independence is a good thing,” Val said. “This experience has told me it’s got a downside.”

Environmentalists and ranchers — ordinarily at least somewhat ideologically opposed — have teamed up in a so-far fruitless effort to stop ETP.

Thus far, special commissioners have collectively awarded several landowners just under $3 million in relief, instead of the paltry tens of thousands per ranch the company reportedly offered.

“I received this $18,000 offer and was told I had a week to accept it,” rancher Jeanne Simpson, whose family has lived on the Big Bend property since the 1880s, told Marketplace.

But the company has nearly limitless funds — millions in damage payouts have done little to halt the progress of pipeline construction, which began in June this year and is slated to be fully operational by March 2017.

“The net of this is you’ve got a $766 million project, and the revenue backed up could be in the billions,” Coyne Gibson, a volunteer with the pipeline opposition Big Bend Conservation Alliance (BBCA), as quoted in the Observer. “If everyone got $1 million, you’re still looking at chump change [for ETP].”

Ranchers and landowners accuse ETP of low-balling offers to access their land, in part because the company doesn’t feel it should take devaluation of property value from the presence of its infrastructure into consideration. Special commissioners are designated to decide these cases of eminent domain; but as explained by the Observer, the hearings amount to little more than ordinary administrative proceedings:

“A district judge typically appoints disinterested landowners who reside in the area and do not have any special legal or technical knowledge to assess how much landowners are owed in exchange for allowing companies access to their land.”

Further, ETP already announced plans to appeal the financial decisions in a statement, saying it is “confident in the appraised land values we have established.”

Worse, and similar to the internationally-notorious Dakota Access Pipeline far to the north, landowners cannot seek a court injunction to halt the now-ongoing construction of the Trans-Pecos while litigation is pending.

Protests begun after Energy Transfer Partners proposed the Trans-Pecos have been largely ineffective, except in drawing attention to the company’s stop-at-nothing tactics — despite the active support of such notable Texans as Peter Coyote, Owen Wilson, and Tommy Lee Jones.

In a recent full-page ad by the BBCA in the Dallas Morning News, Wilson and Jones were among nearly 100 residents, environmentalists, musicians, and others signing a letter to Kelcy Warren urging ETP to reconsider the pipeline’s path. Since the ad appeared, at least 500 others — from every walk of life — signed an online version of the letter.

None of the landowners interviewed by Marketplace believed construction of the Trans-Pecos pipeline could or would be halted by lawsuits, protests, or any other action. Considering ETP’s resorting to action against water protectors and protesters in North Dakota, in conjunction with its laughably inadequate offers to landowners in Texas, that belief seems warranted.

“In terms of the ultimate result of having a pipeline running across their land,” Austin attorney Bill Christian, who had a previous court victory against an unrelated pipeline, told Marketplace, “that’s still going to happen.”

Gibson, of the BBCA, disagrees with that assessment, stating there is “a common misperception this is a done deal.

“We’re trying to send a clear message to the [energy commission] and Texas Railroad Commission that there is still a viable way to stop this.”

But, as the Observer noted, the Federal Energy Regulatory Commission has thus far made permitting a breeze for ETP, despite receiving over 600 public comments before granting approval this May.

Sadly, the fight between Big Oil and residents of the western Texas is likely to grow more contentious in the future.

Last week, Houston-based Apache Corporation announced one of the largest oil and natural gas discoveries in at least a decade near the Davis Mountains of West Texas in — you guessed it — the Permian Basin. Though not precisely in the controversial area concerning the Trans Pecos, the discovery, called “Alpine High” by Apache, comes from similar environmentally-sensitive terrain in which the company has already drilled 19 exploratory wells.

Apache — which has been snatching up property and now owns an area the size of Manhattan just north of Big Bend National Park — already surmised its discovery could yield as much as $80 billion.