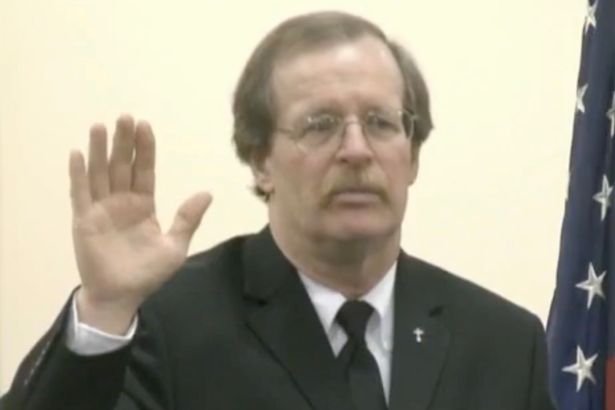 A former mayor in the State of Ohio has admitted to raping and molesting a little girl over a three year period, beginning when she was just 4 years old. However, what is more disturbing is the fact that he claims the child was a “willing participant” and initiated the acts.

Richard Keenan, a former Hubbard mayor, admitted to the crimes, according to the Trumbull County Prosecutor’s Office.

Keenan, who served as Hubbard mayor in 2010 and 2011, was indicted last month on eight counts of rape and 12 counts of attempted rape and gross sexual imposition. A rape conviction carries a sentence of life in prison.

According to the filing by Assistant Prosecutor Gabriel Wildman, Keenan, 65, made the admissions to his wife, a pastor, a social worker and his brother and sister-in-law.

Wildman’s filing states that when Keenan’s wife, Diana, heard about the assaults from the child, “upon confronting [her husband] about the allegations, [Keenan] responded, ‘I did it.'”

The filing states Keenan also admitted sexual abuse during “group discussions” while he was in the ValleyCare Trumbull Memorial Hospital psychiatric ward.

Keenan also had “in depth” conversations with his pastor in which he spoke of the molestation and rape.

Mr. Keenan was also feeling suicidal because he had been abusing the child, according to a social worker from the Warren psychiatric facility, which he voluntarily admitted himself. He also said that the child initiated the act and ever referred to her as a “willing participant.”

Now, questions are being raised as to whether or not his wife and pastor are able to testify against him.

The Ohio Rules of Evidence state that a spouse is considered “competent to be a witness if the testifying spouse elects to testify.”

Additionally, the Ohio Revised Coder says that the pastor cannot be compelled to testify if “the confession or confidential communication was made directly to the cleric.”

Keenan was indicted in August on eight counts of rape and twelve counts of attempted rape and gross sexual imposition. He is free on $75,000 bond. If convicted, he faces life in prison. His trial is scheduled to be held prior to April 24, 2017.

I have to ask, what need is there for a trial? Has the man not confessed to the crime? It is a waste of time and money. Furthermore, what is with sentencing a man to life in prison? Will his young victim not grow up to pay taxes to support food, clothing and housing for her rapist? What is just about that?

We need a return to the Biblical model of law and justice, a model our forefathers followed.