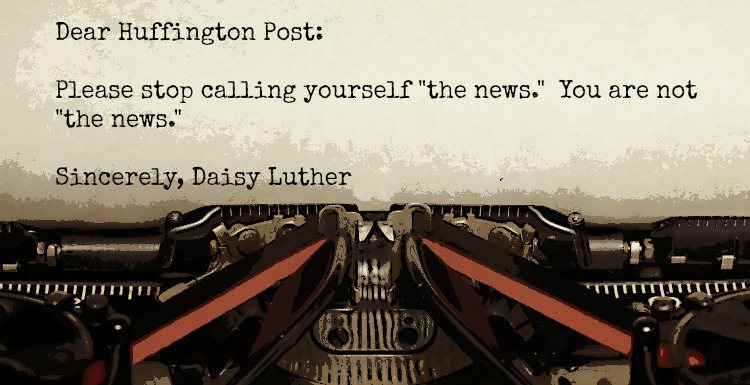 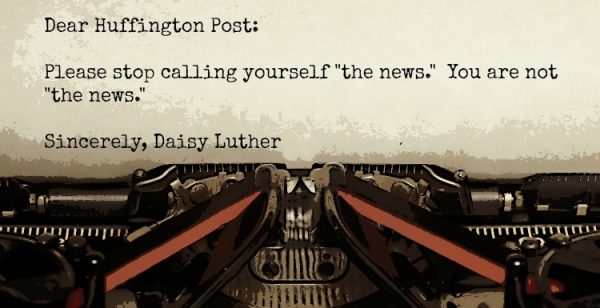 Really, I try not to single out others for direct criticism, but I saw a headline today that iced the cake for me, and I just have to come right out and say it.

The Huffington Post is the most biased, judgmental, manipulative faux journalism website in America. And that’s saying a lot, because I detest CNN and the other mainstream sites rather intensely, too.

Everyone has the right to an opinion, and I’m all for that. My issue is that they pretend to be journalists.

Just for clarity’s sake, I don’t pretend to be a journalist. We’re under no pretense here that I am doing anything other than posting my opinion of the information I’m writing about. That’s why each category has the word “blog” in the title.

But they present their bias as fact and in turn, people who read their blathering actually think that they are reading “the news.” HuffPo has a clear-cut agenda of liberal persuasion, and because they are considered edgy and hip, millennials eat it up with a spoon at a cool coffee house with a name we can’t even pronounce alongside an exotic beverage that cost $7.95 plus a tip to the moody barista with a facial piercing. I actually heard someone say to me, “I saw that on the news” referring to HuffPo, and I thought my head would explode. They call it the news themselves, according to a little tab on the upper left-hand said that says “news.”

Huffington Post, you need to stop calling what you publish “the news.”  IT. IS. NOT. THE. NEWS. Quick vocabulary lesson: when you call your opinion “news” that actually makes what you’re writing “propaganda.”

The specific headline that drew my ire today was this one:

People Are Justifiably Infuriated With How Jimmy Fallon Handled Trump

So because Jimmy Fallon didn’t fall in line with The Gospel According to HuffPo, the world should be “justifiably infuriated”? As my friend Lily Dane wrote over at The Daily Sheeple, “For what it’s worth, Fallon has also interviewed Hillary Clinton in a similar, playful manner.”

While I don’t expect such a bastion of liberal views to be completely unbiased, the blatancy of their bias is completely over the edge.

But the whole point of an “election” is supposed to be that people get to see both candidates – not just your opinion of the candidates.

You don’t have to be a Trump supporter to see that this is clearly not journalism. It doesn’t even pretend to be journalism any longer. It’s just a bunch of people with the same viewpoints who are trying to influence the world to see things the way they do. Oh, yeah, and they’ve got a way bigger audience than me.

Check out the bias

Judge for yourself the picture they’re painting. If you believe them, Trump has emerged from the bowels of hell and Hillary Clinton has been lightly dropped from the very heavens above.

Here are today’s headlines, which I got to by clicking the word “news” in the upper menu. Not opinion. NEWS.

See what I mean? There is no balance! Last week on 9/11 when Hillary Clinton collapsed, it was no big deal according to HuffPo, and they turned it into a big joke, scoffing at anyone who expressed concern about a presidential candidate keeling over in public. You guys. You’re such crazy conspiracy theorists. HuffPo said so.

It makes me sick, and I’m not even endorsing a candidate. I have no horse in this race.

I would just like to see a return to actual journalism instead of the tripe that they publish while peering through their glasses that probably aren’t even prescription lenses. I’m so tired of the pseudo-intellectual left pretending to be all for equality and fairness, but only as it applies to feminists, minorities, people of any sexual preference but hetero, and white men. Equal should be equal, no matter who you’re sleeping with, voting for, or praying to, but it’s certainly not politically correct to say that. They heartily criticize websites like Breitbart for being biased, somehow blind to the irony of their complaints. They hate Milo Yiannopolous, even though he’s gay because he refuses to play their ridiculous game of Team Victim Baseball.

And, and by the way, if you don’t like something they post, look out. They’ll launch a veritable battalion of social justice warriors to come to your Facebook page and your Twitter account and your website and make mean ad hominem attacks against you and your audience. If you don’t like what they had to say, there is some clearly some kind of “ism” involved, and not just “criticism.” It’s one of the bad isms that should all be punished with jail time, castration, a forced uniform of ugly pants and unshaved armpits, or public flogging. It “triggers” them.

Sometimes I think the collapse of society will be directly caused by HuffPo, as they single-handedly fuel the butthurt of millions of readers who would otherwise not realize they have culturally appropriated something, microagressed against someone, or suffered years of yet-unrealized oppression. One day, it’s entirely possible that the apocalypse will have occurred, and along with it, a blizzard dispatched by the Huffington Post will flutter down and suffocate us.  We will find ourselves buried under the weight of a million delicate, butthurt snowflakes requiring safe spaces.

Reading the Huffington Post is akin to watching the Simpsons for your current events. Seriously, if you expect any kind of actual information from that website, just stop it.