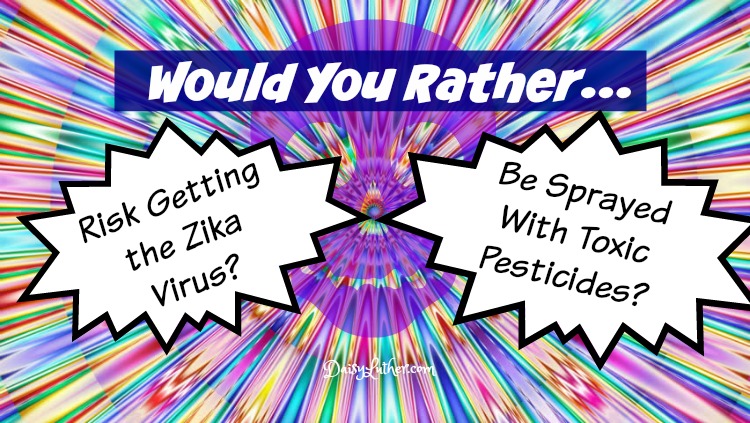 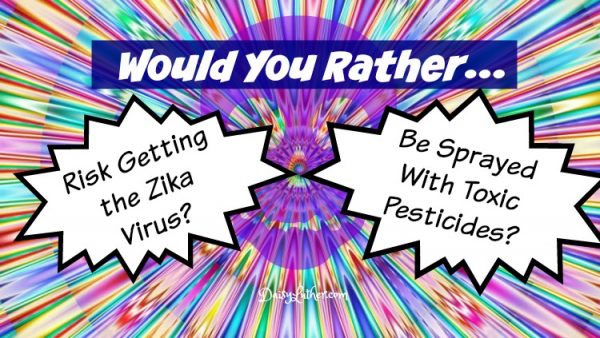 In the worst real life game of “Would You Rather” ever, many Florida residents would far prefer to risk contracting the Zika virus than to be sprayed like a bug.

This week, protesters showed up in gas masks to let the Miami Beach City Commission know how they really feel about aerial spraying of Naled in their neighborhoods.

Things got kind of heated.

Officials were booed and cursed . The CDC was slammed for not revealing the exact locations that mosquitoes carrying the virus have been found. Mosquitoes only move short distances from their hatching grounds, so it’s easy to pinpoint problem areas.

Some residents said they would prefer to face contracting the Zika virus than face the issues that spraying can cause in humans.

This reminds me of the time many years ago when I had to flea-bomb a house. You had to put away all food or dishes that might contain food, cover your plants, put the thing in the center of the house, and then hurry out before you inhaled the spray that came out of it. But this is worse because you can’t get away from the effects completely. When you are being doused with pesticides from a plane flying overhead, there’s really no escape, is there? Your carefully nurtured organic garden is no longer organic. Your outdoor pets are doused. Your children’s swingset it coated. Everything exposed to the outdoors is now tainted with toxic chemicals.

Here’s how Naled can affect humans

While we can’t even be convinced that Zika is as big of a concern as the officials are saying it is, we know that Naled can be disastrous to human health.

Made in China by Zhejiang Rayfull Chemicals Co. Ltd., the data sheet of this specific spray says nothing about the reproductive, teratogenic, and mutagenic effects of the toxin on humans. Although it lists some effects on humans, the information is rather scant.

So has this stuff even been fully tested? Well, just on three species of bacteria. It caused mutations in all but one.

Let’s try Cornell University, who seems to know a little more than the manufacturers about what happens when Naled and humans mix. You can read the whole thing by clicking the link, but I’ve bullet-pointed a few of the most pertinent facts:

The Cornell information goes on to say that Naled is moderately toxic to birds (hmmm….I wonder if that could be related to what happened in Boston somehow), highly toxic to fish, and deadly to bees (yeah, we learned that the hard way).

Despite the strong feelings of local residents, the spraying will continue.

Back to the Miami Beach meeting. Kiro Ace, a graphic designer, said, “I don’t want to be sprayed with pesticides for what I believe is a hoax…If you’re going to spray, we want a say!”

As it turns out, residents don’t really get a say.

Officials have agreed to look into alternative mosquito control methods in the future, but the spraying planned for this weekend will still go ahead. Currently, there are 77 cases of Zika confirmed in Florida. Despite that relatively small number, 40,000 residents in South Beach will be doused with poison over their strong objections.